Australia police in spotlight on Indigenous deaths in custody | News 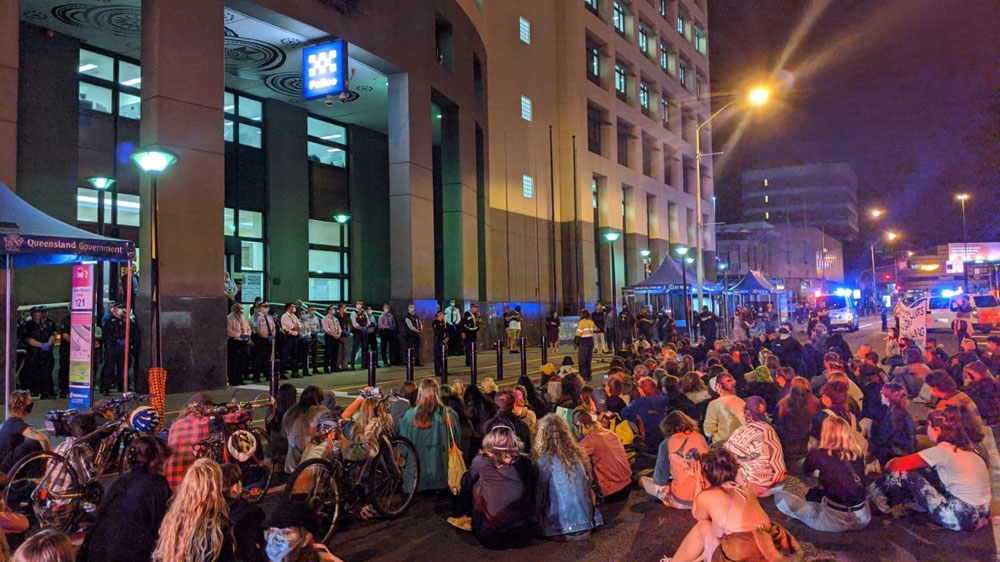 Brisbane, Australia – “Say her name!” yelled Ruby Wharton to a crowd of Black Lives Matter supporters in Brisbane, as hundreds took to the streets of the Queensland city following the death of a 49-year-old Indigenous woman in police custody.

The 23-year-old activist from the Warriors of the Aboriginal Resistance collective was speaking on behalf of a community reeling from the loss of 441 Indigenous Australians in police custody since 1991. To date, not a single officer has been charged.

“This right here is not a protest, this is ceremony; this is lore; this is our responsibility,” she said, her anger and determination unshakeable.

“The first point of cause for First Nations people when we mourn, is we sing them home,” Wharton said.

“Aunty Sherry”, as protesters have named the Birri Gubba woman out of respect for Indigenous culture that precludes the naming of deceased people, was 49 years old, and a mother of three. She was found dead in a cell at the Brisbane police station in the early hours of September 10. Arrested on property and drug matters four days earlier, she had appeared in court a day after her arrest and remanded in custody until October 7.

Queensland Police Assistant Commissioner Brian Codd told journalists that a post-mortem examination appeared to indicate “that the death was by natural causes,” but that the circumstances remained under investigation.

For a community that has long pointed to the mistreatment and neglect of Indigenous people in custody, his comments brought little solace.

Protesters sat on the street outside Brisbane police headquarters. Aunty Sherry was the 441st Indigenous person to die in police custody since a landmark royal commission in 1991 [Margarite Clarey/Al Jazeera]

“This is a national emergency and we demand urgent national leadership,” NATSILS co-chair Nerita Waight said in a statement. “This lack of accountability means that in practice there is no penalty for the death of our people in custody. More police officers involved in deaths in custody have been promoted than convicted, but there cannot be justice without accountability.”

Aboriginal and Torres Strait Islander people comprise only 3 percent of Australia’s population, but they make up almost a third of adults jailed across the country.

The rates are even higher for Indigenous youth, who were 16 times more likely to be under youth justice supervision – in detention, or on bail, parole or probation – than non-Indigenous young people in 2018-19, according to the Australian Insitute of Health and Welfare, a government agency.

Human Rights Watch says the over-representation of Aboriginal and Torres Strait Islander people in the criminal justice system, which has increased by 9 percent since 2000, is often the result of minor offences like unpaid fines.

In a submission to the United Nations’ Universal Periodic Review of Australia, which is set for early 2021, the rights group says the government has failed to heed the recommendations laid out in the 1991 Royal Commission on Aboriginal Deaths in Custody, and calls for an end to the “mistreatment of Aboriginal and Torres Strait Islander people in police cells and prisons”.

The Black Lives Matter demonstrations set in motion by the death of George Floyd in the United States have brought renewed scrutiny to Australia’s treatment of its Indigenous people. 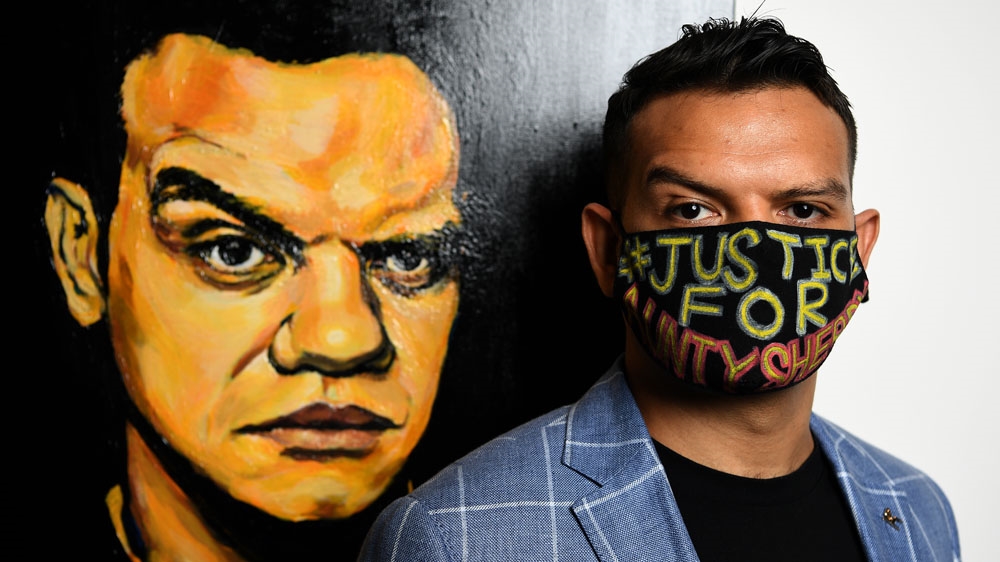 Australian actor Meyne Wyatt posed for a photo with his packing room prize-winning self-portrait at the Art Gallery of New South Wales wearing a ‘Justice for Aunty Sherry’ mask. Wyatt is the first Indigenous artist to claim any part of the prestigious Archibald Prize, which has been running for 99 years [Joel Carrett/EPA]

In June, tens of thousands of people took to the streets in solidarity with US protesters, to demand justice for Indigenous lives lost in custody.

The Birri Gubba woman’s death sparked new marches in the city and 18 protesters were arrested after scuffles broke out in front of police headquarters. More rallies are planned later on Friday.

Aboriginal resident Phillip Murrii said that despite years of protests, the situation was only getting worse for Aboriginal and Torres Strait Islander people.

“Things are not getting better for our people; they are getting worse.

“We are not getting on top of the system. The system is still on top of us. They still have their knees on our necks and they are still killing our people every day in this colony.”

New targets were set in June to reduce Indigenous incarceration rates under a long-standing government initiative to “close the gap” on contributors such as health, education and employment inequalities.

Wharton says change will not happen until First Nations values and laws are acknowledged and made part of the solution.

“We did not dream no dreaming; we came from that dreaming,” she said, referring to the Aboriginal belief system on creation and the laws of existence. 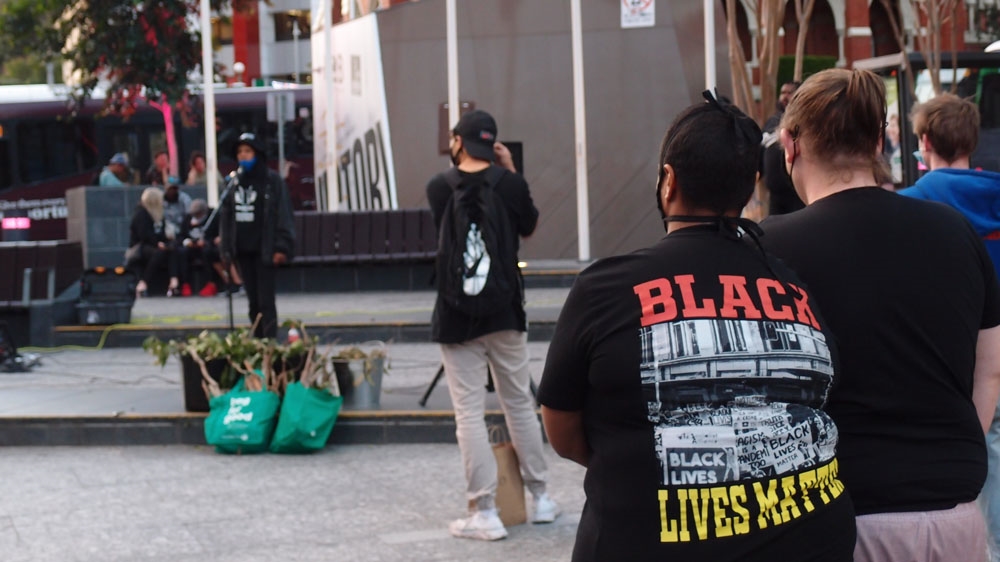 Ruby Wharton addressed the crowd that gathered after the death of Aunty Sherry in police custody in Brisbane on September 10. She says the Indigenous community will not stop fighting for justice [Margarite Clarey/Al Jazeera]

“This is law, we live in multiple dimensions at the one time and we work to uphold our responsibility. When we bring those values to the front line and come up against systemic racism, based on a common and civil law legal system, what weapons have we got?

“The solution doesn’t exist in their system because that system don’t protect us,” she said.

Indigenous activists have renewed calls for the government to create a treaty process to negotiate with the clans and bring an end to Indigenous incarceration and deaths in custody.

Meanwhile, Wharton said the community was not prepared to just sit around and wait for justice.

“We’ve said many, many names here,” she said. “We come back, time and time again. No matter how many times you kick us we get back up. That’s what Brisbane bla(c)ks do.”