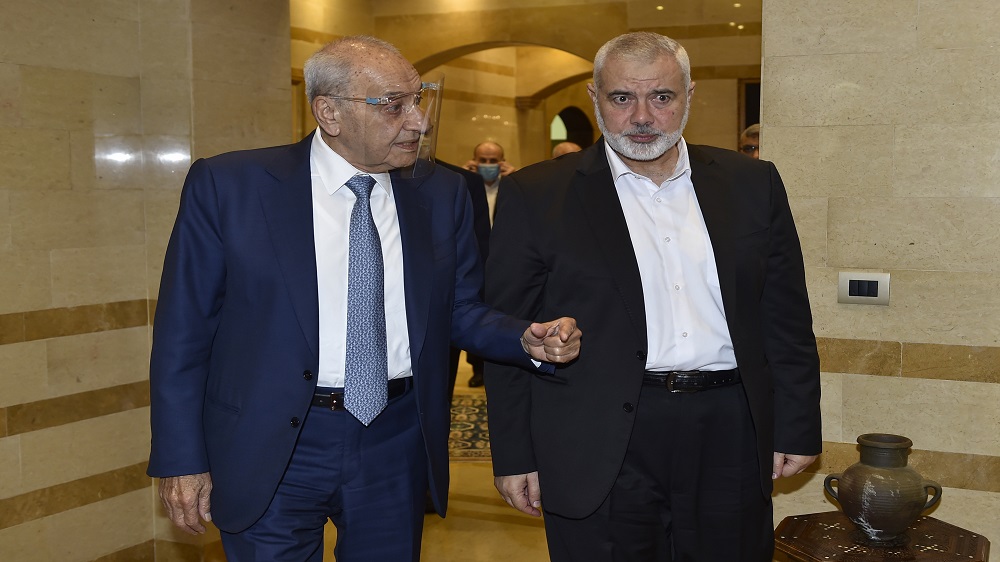 Hamas chief Ismail Haniyeh was in Beirut on Wednesday for a week-long visit that will see him meet with Palestinian factions over growing cooperation between their enemy Israel and Arab states.

Haniyeh’s visit, his first to Lebanon in 27 years, comes after an August 13 announcement that Israel and the United Arab Emirates (UAE) have agreed to normalise ties.

On Thursday, Haniyeh will meet representatives of other Palestinian factions in rare talks on how to respond to such accords and to a Middle East peace plan announced by Washington this year, said the Hamas representative in Lebanon, Ali Baraka.

The meeting at the Palestinian embassy in Beirut will coincide with talks in Ramallah between Palestinian President Mahmoud Abbas and representatives of Palestinian factions there.

Thursday’s joint discussions in Ramallah and Beirut aim to develop “a unified Palestinian strategy to confront normalisation schemes … and to reject plans to annex the West Bank as well as [Trump’s] ‘deal of the century'”, Baraka said.

Speaking from Ramallah, Ahmad Majdalani, a member of the executive committee of the Palestine Liberation Organization (PLO), said the talks also sought to boost ties between the factions.

They aim “to open a new page, to end divisions, achieve national reconciliation and build a national partnership between all factions”, he said.

The Palestinian embassy in Lebanon said a part of the meeting was organised in Lebanon because most participating officials were residing either in Beirut, Syria or Ramallah.

Baraka justified the choice of Lebanon by saying the country is a supporter of the Palestinian cause and has a large population of Palestinian refugees who would be adversely affected by United States President Donald Trump’s plan for the Middle East.

The last time most heads of Palestinian factions held joint talks was in 2013 in Cairo.

Under the US plan unveiled this year, Israel would retain control of the disputed city of Jerusalem as its “undivided capital” and annex settlements and other areas in the occupied West Bank.

On August 13, Trump announced an agreement between the UAE and Israel to normalise ties.

Under the watershed US-brokered deal, Israel has suspended, but not permanently dropped, annexation plans.

The UAE became the third Arab country to agree to normalise ties with Israel, after Egypt signed a peace deal in 1979 and Jordan followed suit in 1994.

Israeli Prime Minister Benjamin Netanyahu said Sunday “there are many more unpublicised meetings with Arab and Muslim leaders to normalise relations with the state of Israel”.

This nun was killed by priest and sister she caught engage in a sex act. Nearly 3 decades later, justice is served

New Jersey man loses $80K in life savings after routine bank transfer, 7 On Your Side steps in

Coronavirus: How the pandemic has changed the world economy