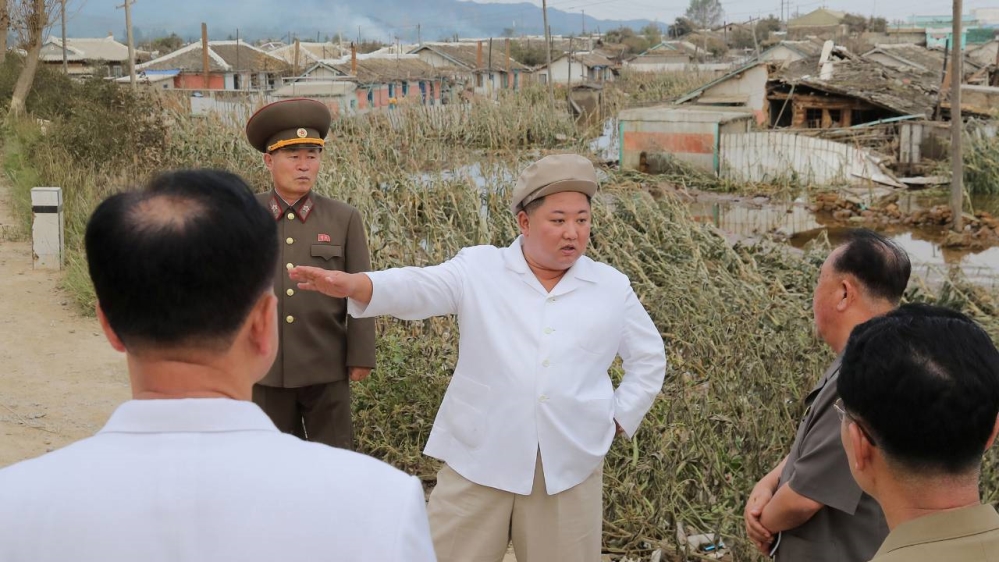 North Korea’s state-run television,  KRT, carried footage of Kim convening a meeting with North Korean officials and walking around in the typhoon-hit area.

While Kim surveyed the damage caused by a typhoon that battered coastal areas last week, a tenth typhoon of the season was swirling in the East China Sea.

The Korean Central News Agency (KCNA) said more than 1,000 houses were destroyed in coastal areas of South and North Hamgyong provinces and reported that farmland and some public buildings had been inundated.

KCNA did not report any deaths or injuries in the two provinces. But the country’s main Rodong Sinmun newspaper said on Saturday “dozens of casualties” were reported in Kangwon province, south of the Hamgyong provinces, and that officials in Kangwon would be “gravely punished” for failing to evacuate residents to safety.

Kim led an enlarged executive policy committee meeting on recovery efforts in the typhoon-hit areas, focusing on detailed measures such as the organisation of building crews to be dispatched to the areas, designs and material transport, KCNA said.

At the meeting, he also dismissed the chairman of the South Hamyong provincial party committee and appointed a new chairman.

North Korea’s governing party had called for punishment of officials whose failure to follow orders results in “dozens of casualties” during typhoons, the country’s official party newspaper reported on Saturday.

Separately, Kim sent an open letter to party members in the capital noting that this year has witnessed “uncommon difficulties due to the protracted worldwide public health crisis” and natural disasters.

The letter added that the Party Central Committee decided to dispatch 12,000 party members from Pyongyang to the typhoon-hit areas to help communities recover.

North Korea has been putting in place “practical measures” to minimise damage from the tenth typhoon of the season by informing people of locations of shelters and typhoon paths as well as how to respond and behave, KCNA reported.

The isolated country has been grappling with torrential rains, floods and typhoons in one of the wettest rainy seasons on record.

Typhoon Maysak smashed into the Korean Peninsula on Thursday. In South Korea, it left at least two dead and thousands temporarily without power.

Canada aims to bring in over 1.2 million immigrants over 3 years | US & Canada

Earthquake strikes in Aegean Sea off coast of Turkey, Greece

Earthquake off Turkey and Greece kills at least fourteen

The congressional candidates who have engaged with the QAnon conspiracy theory