We must design alternatives to ‘highways of death’ | Africa 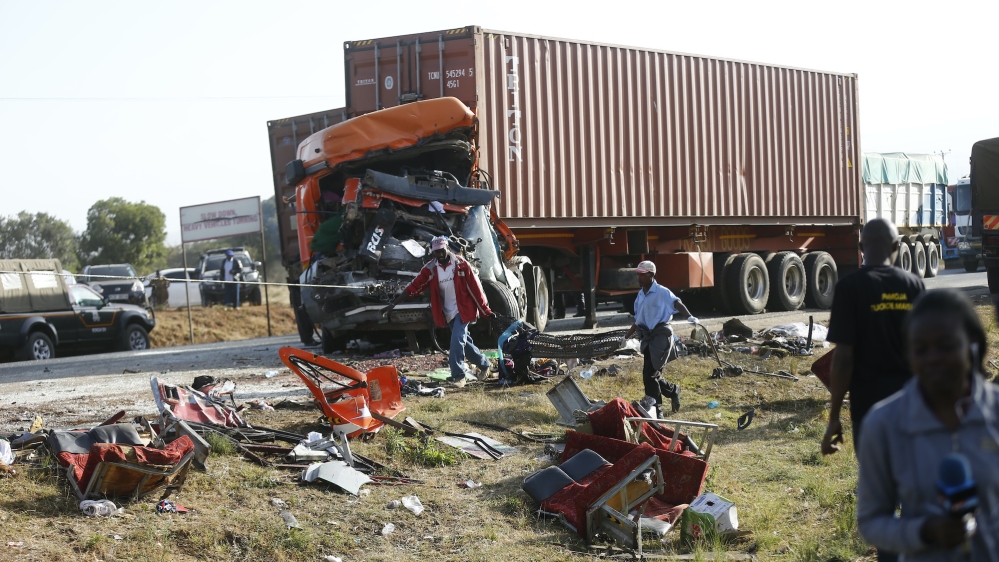 If you are an average reader, it might take you about four minutes to get to the bottom of this article. In that time, 10 people – 10 people who woke up this morning, just like you, with big plans for the day – will lose their lives on the world’s roads. Four minutes, 10 deaths. Ten deaths that we know full well how to prevent.

For me, that figure is not just a bland statistic.

In September 1998, my mum and older sister boarded an eight-person Toyota station wagon in Nairobi headed for western Kenya. To reach their destination, they had to pass through the infamous Salgaa stretch along the Nakuru-Eldoret Highway, approximately 160km (100 miles) away from Nairobi.

Across Kenya, that short stretch of road is known as the “highway of death” because it has killed hundreds of people over the years. In September 1998, one of those lives was my mother’s. When the station wagon they were travelling in crashed, only two of the eight passengers survived. My sister was one of them.

As a child, I blamed it on God, the driver, fate. But now, as an architect, I recognise that design also played a part. The so-called “highway of death” is a straight stretch of road with no bends following an extremely steep downhill slope. Why design a road that encourages freewheeling, speeding, carelessness?

In 2019, the Salgaa stretch was converted into a dual carriageway and a concrete step barrier was built on its central reserve to increase safety. The new measures significantly reduced the number of crashes recorded in the area, but they came decades too late.

We often casually refer to road traffic crashes as “accidents”, but more often than not, there is nothing accidental about these tragedies. Measures proven to reduce the risk of road traffic injuries and deaths – such as speed management, improvement of infrastructures and post-crash care, enforcement of traffic laws and vehicle safety standards – do exist.

Acknowledging that most road “accidents” are totally preventable, the UN’s 2030 Agenda for Sustainable Development has set ambitious targets for reducing road traffic injuries and deaths across the globe.

According to the World Health Organization (WHO), some 1.35 million people are killed on roads around the world each year. This means, every day more than 3,700 lives are lost on the world’s roads. The situation is even worse in Africa: eight out of the 10 countries with the highest road traffic death rates are on the continent.

Most road crashes are blamed on “human error”, but such errors are rarely tied only to the knowledge and skills of the individuals making them – the design of the environment in which the error takes place also plays an important role. Yet, the design of roads is often at the mercy of municipal budgets.

Worldwide, road networks are designed to be efficient and cost-saving, just like the mechanical machines that run on them. More than half of all road deaths and severe injuries happen on less than 10 percent of the world’s roads. That shows us that “human error” is often a direct result of poor design.

The parts of the road not used by cars are just as important. More than half of all road traffic deaths are among those not using cars, such as pedestrians and cyclists. Nevertheless, authorities responsible for building roads often view roadside safety measures as an unnecessary added cost.

Beyond their incredibly high human cost, traffic crashes are also a significant burden on economies and healthcare systems.

People with road traffic injuries are the most frequent users of operating theatres and intensive care units globally, and account for 13 to 31 percent of all injury-related patients and 48 percent of bed occupancy in surgical wards.

This is not only catastrophic for struggling, underfunded healthcare systems, but also bad for the economy.  Road crashes cost most countries 3 percent of their gross domestic product. A recent study found that in 2000 in the US, the 5.27 million nonfatal road crash injuries cost $31.7bn to treat, placing a tremendous burden on public healthcare services and the finances of road traffic victims and their families. Major injuries, such as those to the brain and spinal cord, cost an average of $332,457 per injury.

Solutions to curb traffic-related accidents have been researched for many years and go beyond the traditional speed bump. Traffic calming, for example, is a road safety strategy that uses physical design features in combination with other measures to reduce traffic flow, combat speeding and protect motorists and non-motorists alike.

The introduction of vehicle-free zones in dense urban districts, school zones and residential neighbourhoods is also known to be an effective prevention measure that can significantly reduce the number of traffic crashes.

With this knowledge in hand, city planners in Bogota, Colombia were able to reduce the number of traffic deaths by 50 percent between 1996 and 2006. They did this by introducing rapid bus transport, 300km (186 miles) of bikeways and 60,000 square metres (14.8 acres) of improved pedestrian infrastructure.

Lastly, gathering data on the hotspots of traffic-related accidents is key to understanding where accidents regularly occur. Identifying the factors that increase or decrease the risk of an accident at a particular location can help us design the most effective solutions.

The COVID-19 pandemic has given us an opportunity to rethink the way we live. As countries slowly start to open up and the cars begin filling the roads again, planners, engineers, and municipalities must drive human-centred road design and make the roads safer for all of us.

The views expressed in this article are the author’s own and do not necessarily reflect Al Jazeera’s editorial stance.