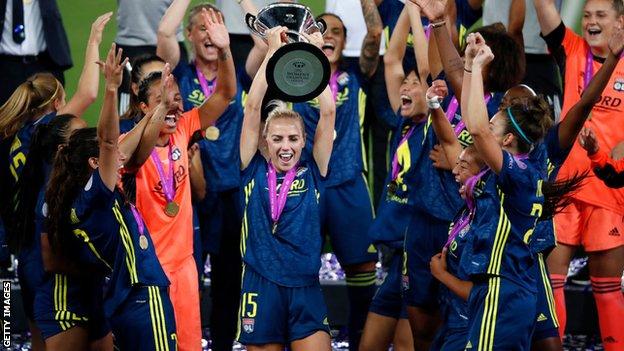 England left-back Alex Greenwood says she joined Manchester City because she believes the club “wants to win big things, including the Champions League” following her move from Lyon.

Greenwood, 27, has signed a three-year deal after spending one season with the French side, helping them win a fifth European title in a row.

She joins on a free transfer following the end of her contract at Lyon.

The former Manchester United captain is City’s fifth signing of the summer.

“I want to continue what Manchester City have done previously and that’s to be successful and win trophies,” Greenwood told BBC Sport.

“Once you get a taste of winning a trophy like the Champions League, which is the pinnacle, it’s something that you crave. That feeling you have after you win is addictive.

“You want it more and more and more. That’s why I chose to come to this club. If I can play a small part in that, then it will be fantastic.”

Greenwood, who has also played for Liverpool, Notts County and Everton, led Manchester United to the Women’s Championship title in their first season since they reformed following a 13-year absence.

The defender was also part of the England squad which reached the World Cup semi-finals in 2018 and has made 46 appearances for the Lionesses since her debut in 2014.

She will be available for selection for Sunday’s WSL fixture against Brighton at Academy stadium.

‘There’s competition in every position’

Greenwood will compete for the left-back spot with England team-mate Demi Stokes, who has made 62 appearances for City since joining in 2015.

The two defenders also vie for the same position with the national team.

“It’s a healthy competition,” said Greenwood. “We really push each other to our limit.

“We improve each other every year. If we can make each other better, it only makes the team better. I’m coming here to play football matches and improve the squad.

“If you look around the team, there’s competition in every position. That’s exactly what we need if we want to be successful.”

‘I would be giving me stick!’

Greenwood hopes to use her experience in Lyon, which she says made her a “better player”, to drive City to more titles and European success.

“I loved every minute of it [at Lyon]. I went there to win trophies and improve as an individual. I feel like I’ve come back as a better player and a better person, with a few more medals in the cabinet which is always what I wanted to do,” she added.

“I have nothing but good memories from Lyon so I hope I can continue that in Manchester.”

She returns to the same city she left in 2019 – and Greenwood expects a reaction from rival fans.

“It’s part and parcel of the game. I fully expect it. I would also be giving me stick!” she said.

“I have a lot of respect for their fans. They were brilliant with me during my time there. I am on the other side of Manchester now so that’s my full focus. But it makes derby day a little bit more interesting and I can’t wait.”