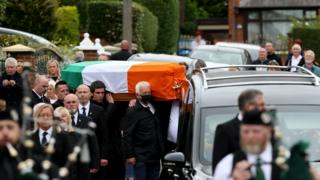 She said she regrets that large numbers attended the veteran republican’s funeral in June.

Ms O’Neill was among those who attended, despite Covid-19 restrictions.

Other parties said their credibility was undermined.

After the funeral, First Minister and DUP leader Arlene Foster suspended her practice of hosting a joint news conference with Ms O’Neill when delivering Covid-19 updates.

Ms O’Neill told RTÉ News on Wednesday evening that she hopes the practice can be restored for a challenging winter.

Responding to Ms O’Neill’s comments on Thursday morning, Ms Foster said it was “right” that she had “acknowledged the undermining of the public messaging as a result of what happened, and the deep hurt and anger that was caused”.

She said: “It wasn’t my intention this would happen, but it did, I accept this and I regret this is the case.

“I accept that we have not been able to deliver clear messaging in the format that was the practice before this controversy.”

Mrs Foster said “those who set the rules must abide by the rules”.

She said the investigations into what happened at the funeral must continue, and she looks forward to their conclusions “as soon as possible”.

She added that it was now “vital” to move forward and deal with the pandemic “on the basis that our messages are clear and that the actions of everyone in leadership do nothing to undermine the collective efforts to beat COVID-19”.

Mr Martin told RTÉ the funeral did “damage to public confidence in the administration at the time”, adding the response from Sinn Féin “for far too long was one of denial”.

He said: “It should have happened earlier but it has happened and I welcome it.”

Could Stormont’s leaders now return to the podium?

The timing of this admission by Michelle O’Neill makes it more significant.

It comes just a day after health officials delivered the starkest warning yet about the latest rise in Covid-19 cases, with Stormont ministers set to decide which restrictions to re-impose later today.

Arlene Foster and Michelle O’Neill have not stood side-by-side at the press podiums for more than two months but this seems directed at bringing an end to that stalemate.

It is early days but given the DUP leader’s insistence that she would not resume the briefings with Ms O’Neill until there was a “recognition” that the credibility of the executive’s messaging had been breached, this might just be enough.

Some within the DUP may welcome it; others still won’t feel it’s what they had called for.

But it’s the party leadership that will have the final say.

She said: “Michelle, I think, is making clear an important point.”Firstly her regret, and our regret, that any undermining would occur to the public health messaging.

“And also the fact that we need now, a joint effort across the island, and in the north between all of the parties in the Executive, to stand on a common platform.”

She said “The consequences of their blatant disregard for the public health message is evidenced in the case count, yet sorry seems to be the hardest word.”

But Alliance MP for North Down, Stephen Farry, said Ms O’Neill’s were “significant and helpful”.

Michelle O’Neill’s party colleague and South Down MP Chris Hazzard said it was a “positive step”, and that is was “right that Michelle has recognised and went on record to say that the fallout from that event in the summer had an impact on the public health message at the executive.”

Speaking to BBC Radio Foyle, Mr Hazzard said: “Hopefully now the executive can speak with one voice again to our local community in what does look like a difficult winter to come.”

Meanwhile, the DUP has criticised the Police Ombudsman for “a failure” to investigate how the PSNI handled the funeral.

NI’s Chief Constable Simon Byrne said police had forwarded a complaint from a member of the public regarding police actions leading up to the funeral on 30 June.

But the Police Ombudsman said it was not currently investigating the issue.

“We have not received any complaints from anyone with direct experience of the policing of a funeral in relation to Covid regulations, and are not currently investigating this issue,” said a spokesperson.

DUP MLA and NI Policing Board member Joanne Bunting said it was “a weak defence for not acting”.

Following a meeting with Police Ombudsman Marie Anderson on Tuesday, the East Belfast representative said: “The PSNI must be held fully accountable not just for proactive steps its officers take but for clear failures to act when public safety is at stake.”

She said there was “deep unease” among many of those who elected her over “the Police Ombudsman’s failure to provide scrutiny of PSNI inaction against large republican funerals which breached lockdown restrictions”.

“This is in contrast to the commissioned PONI investigation into police practice which led to the issuing of fixed penalty notices at Black Lives Matter protests during the same period,” she added.

“Such inconsistency does little to restore confidence in the role or added value of the Police Ombudsman’s Office.”

Mark Webster, Cumbria Constabulary’s deputy chief constable, was appointed to oversee and direct the PSNI’s investigation into potential breaches of Covid-19 restrictions and also help review events leading up to the date of the funeral.