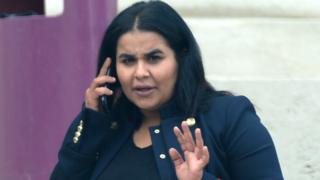 A woman stole a passenger’s suitcase containing £76,000 worth of designer clothes and jewellery from a train.

Hajar Al Fahad, 26, learned the woman was wealthy after striking up a conversation with her on a London to south Wales train.

She admitted taking the suitcase containing items by Chanel and Cartier as the train arrived at Cardiff Central station, the city’s crown court heard.

Al Fahad was given an eight-month prison sentence, suspended for a year.

It wasn’t until she reached her destination 40 miles away in Swansea that the victim realised her suitcase was missing.

Prosecutor Andrew Davies said the pair began talking when Al Fahad placed her luggage on top of the victim’s.

Police traced the mother of two, of Llanrumney in Cardiff, through her purchase of a train ticket at London’s Paddington station.

Officers found the majority of the items from the suitcase, which came to a total value of £76,559.

A search of Al Fahad’s mobile discovered internet searches for the items in the suitcase and photographs of herself wearing the items she had stolen.

When questioned she said the suitcase was hers and later claimed the luxury goods inside were counterfeit.

The court heard Al Fahad “added an element of fantasy” to her conversation with the woman on the train in September 2018, by claiming she was wealthy herself and had a cleaner.

Mitigating, Tim Petrides said: “She was trying to portray herself beyond her means and an element of fantasy came into the conversation.

“She has described her actions as a ‘moment of madness’ and in her own words to me, ‘sorry is not enough’.”

Judge Catherine Richards said she accepted Al Fahad did not set out to steal from anyone but carried out an opportunistic theft.

As well the suspended sentence, the defendant was ordered to carry out a 20-day rehabilitation activity requirement and 150 hours unpaid work.

Rich nations had vaccine options after AstraZeneca and J&J faced clot reports. Others may not have that luxury