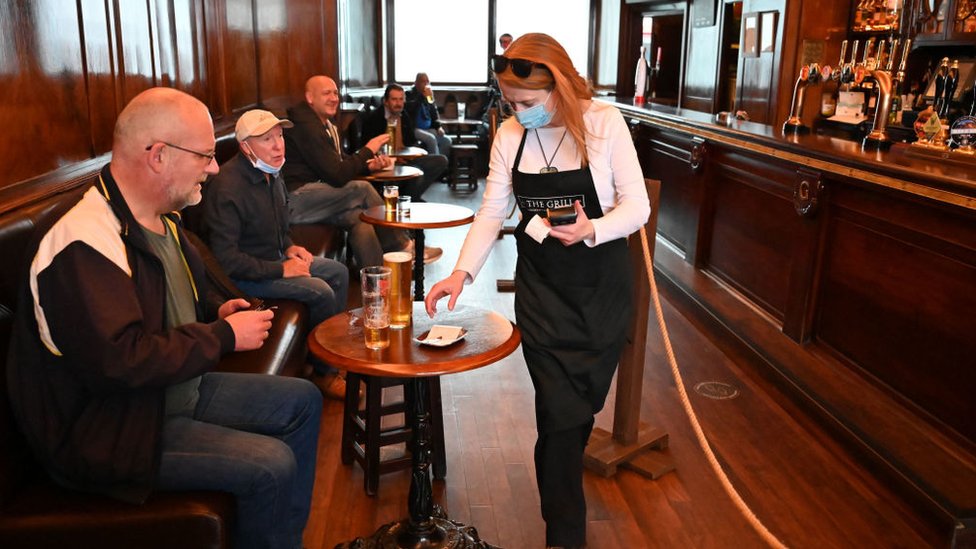 Up to 12,500 jobs are at risk in Scotland’s bars and pubs due to the ongoing coronavirus pandemic, according to an industry body.

A survey by the Scottish Licensed Trade Association (SLTA) found nearly nine in 10 of them were facing reduced revenue.

The responses from 600 premises also found that 45% of owners did not expect to return to normal trading until a vaccine for the disease was found.

One industry expert warned the sector was facing a “battle for survival”.

The survey, sponsored by KPMG, found revenues had dropped by more than half from the same period last year at 38% of premises.

Some 85% reported a decline in footfall while 89% have experienced a drop in revenue.

Social distancing regulations have also had an impact, with pubs and bars spending an average of £2,500 per outlet to comply with the rules.

This has prompted fears that about a quarter of the 50,000 people employed in the sector could lose their jobs.

Colin Wilkinson, managing director of the SLTA, said: “The impact of Covid has been more severe for Scotland’s pubs and bars than virtually any other sector.

“We now face the stark reality that up to 12,500 jobs could be lost as nearly 90% of premises report that their revenue is down versus last year, with 38% reporting revenue decreases of over 50%.

“Our own survey reinforces a recent survey by the University of Edinburgh on behalf of the tourism industry, which shows the devastating impact on employment in pubs, bars and the wider hospitality sector.”

He added: “With many people working from home and local restrictions, one of Scotland’s major employment sectors faces unparalleled difficulties and the current business climate is leading to a real threat of permanent business closures and job losses.”

Alistair McAlinden, head of hospitality and leisure for KPMG in Scotland, said: “It’s incredibly concerning but not entirely surprising, to hear that so many licensed trade operators across Scotland are worried about large-scale job losses and possible business failures over the next 12 months.

“The industry is facing a battle for survival and there will inevitably be some casualties.”

Michael Bergson, the owner of Bucks Bar in Glasgow, has spent 25 years working in hospitality – and has never seen so any businesses go to the wall.

“It’s been like nothing we’ve ever faced before,” he said.

Getting back up and running was “manic”.

“Staff were scared, customers were scared, getting all our safety measures in place – but I think confidence started to come back so people feel safe to go to bars and restaurants again,” he said.

“Eat Out to Help out was massive for us. It was a much-need boost but now that’s over we’ve got many challenges ahead.

“It meant we were able to turn a profit during the week, which is crucial because you need that to cover your costs now.”

The recovery is a fragile one. As well as facing the extra costs of PPE, there is reduced capacity because of physical separation rules and more staff are needed to carry out extra duties such as cleaning.

Mr Bergson would like to see politicians doing more to restore confidence, convincing customers that it is safe to return to bars and restaurants.

“If you don’t give people a controlled environment to socialise in then I’m afraid to say they will find other ways, especially young people,” he said.

He’d also like to see a relaxation of the rules on ambient music – designed to stop people leaning in to be heard – because he believes they are counter productive.

“What we’re finding is that when you’ve got no music in a bar or restaurant, people feel self-conscious of who’s next to them and it causes them to lean in.”