Covid: Taskforce to look at virus testing for UK arrivals 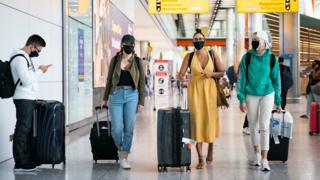 A taskforce to set up a Covid-19 testing system for people travelling to the UK from abroad is set to be unveiled by the transport secretary.

Anyone arriving to the UK must self-isolate for 14 days, unless they have come from an exempt destination.

Grant Shapps, who is due to give details of the taskforce to Parliament later, said he understood “how frustrating” the rules could be.

Airport bosses have repeatedly called for testing at UK airports.

Mr Shapps said: “I know how frustrating it can be to have to quarantine after your holiday. It happened to me so I understand it first hand, but it is also important to make sure that we protect the health of people in the United Kingdom, where we have worked so hard and are still having to work incredibly hard to keep on top of this disease.”

“I will be making the announcement later today to Parliament, but it involves a taskforce to implement systems which would enable us to have testing and perhaps earlier release [from quarantine].”

The aviation industry has struggled with the drop in passenger numbers since the start of the UK’s epidemic.

Last month the head of Southampton, Aberdeen and Glasgow airports accused ministers of “overseeing the demise of UK aviation” by not giving their backing for Covid-19 tests at airports.

And the bosses of Virgin Atlantic and Heathrow Airport said “leadership” was needed on the testing issue, warning of the huge number of jobs at stake.

15 thoughts on “Covid: Taskforce to look at virus testing for UK arrivals”