Czech Republic 1-2 Scotland: Steve Clarke’s side in nervous win against makeshift side 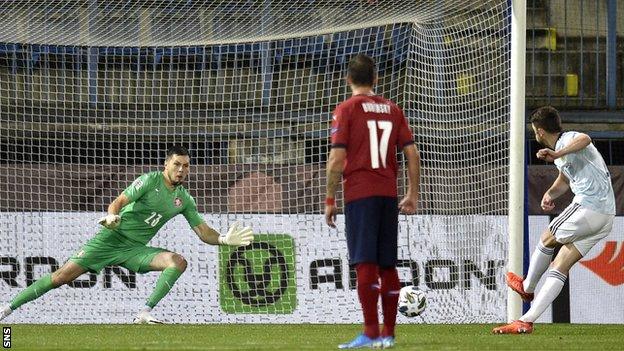 Scotland came from behind to beat a makeshift Czech Republic and go top of their Nations League group.

The Czechs, with a whole new squad after the players who beat Slovakia last week entered quarantine, took the lead through Jakub Pesek.

And Ryan Christie scored his second penalty in two games for the winner after Andy Robertson had been fouled.

But Czech Republic came close to levelling with Marek Havlik and Antonin Rusek hitting the frame of the goal.

Steve Clarke’s Scots, who drew at home to Israel on Friday, lead Czech Republic by a point and are unbeaten in five matches going into next month’s European Championship play-off semi-final against Israel.

The preamble to the match had been dominated by the Czechs having to put their original squad into isolation after two players were in contact with a backroom staff member who had tested positive for Covid-19.

The Scots, showing five changes after last week’s 1-1 draw, were wasteful in possession in the opening stages and the hosts’ early enthusiasm gave them them the impetus to capitalise.

Kenny McLean was dispossessed and Stanislav Tecl’s pass split the visiting defence as Pesek sprung the offside trap to finish.

It took Clarke’s side until the 24th minute to test Ales Mandous with Liam Palmer’s low effort and Ryan Christie’s follow-up kept out by the goalkeeper.

That gave the Scots some momentum and Palmer’s intelligent ball was diverted high into the net by the outstretched foot of Dykes. Relief more than joy descended on the players as they celebrated.

Still the Czechs were a threat and Adam Janos forced Marshall to touch a low 25-yard drive wide.

Captain Robertson was felled by Tomas Malinsky early in the second period and Christie alternated from Friday’s spot-kick by going to the goalkeeper’s left to convert.

But Scotland had more nervous moments as the inexperienced hosts finished strongly. Havlik went close with a bending free-kick, Tecl fired wide with the goal gaping after Marshall had parried Pesek’s shot and substitute Rusek’s header bounced off the upright.

What did we learn?

A 3-5-1-1 formation was not a rousing success for Scotland on Friday and for the opening 20 minutes in Olomouc its popularity amongst the Tartan Army fans watching on television would certainly have been on the wane.

However, once full-backs Palmer and Robertson started receiving the ball in advanced positions, Scotland looked more threatening, though Manchester United midfielder Scott McTominay again looked uncomfortable playing on the right of the back three.

Whether to persist with the system is a poser for Clarke going into next month’s crucial match against Israel, who drew at home with Slovakia in Monday’s other Group B2 fixture.

Australian-born Dykes is proving to be a real find after he elected to play for the country of his parents’ birth while Christie’s confidence at international level continues to grow.

What did they say?

Scotland forward Lyndon Dykes on Sky Sports: “It was really good, it’s good for a striker to get off the mark. It was good to contribute to the 2-1 win.

“It was a tough game, it was hard conditions with what happened before the game but in the end, we got the three points. We always just came in expecting the best. We didn’t look at the team any different.”

Scotland host Israel on 8 October, with the winner progressing to face Norway or Serbia in the European Championship play-off finals. The Scots’ next two Nations League matches are at home to Slovakia and Czech Republic on 11 and 14 October.

The Czechs, who have qualified for next summer’s Euros, have a friendly in Cyprus then visit Israel before they next play Scotland.