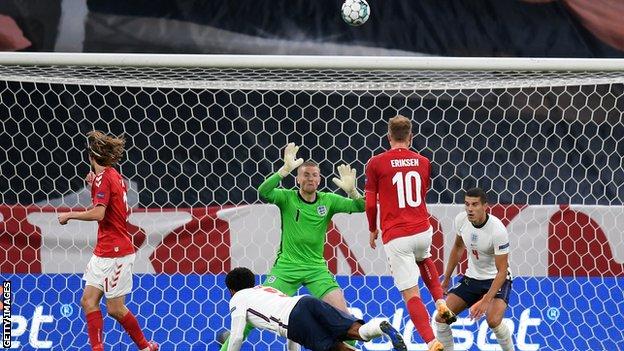 England played out a dreary deadlock with Denmark in Copenhagen as the Nations League meeting turned into a drab non-event.

Harry Kane almost won it for England in the dying seconds when he went round Denmark keeper Kasper Schmeichel, only to see his shot cleared off the line by Mathias Jorgensen – but such a poor quality encounter barely deserved a dramatic finale.

Manager Gareth Southgate will have hoped for some talking points on the pitch after the off-field distraction that saw young duo Phil Foden and Mason Greenwood sent home for breaking Covid-19 protocols in Iceland.

Denmark had the better chances until Kane’s late effort, with England keeper Jordan Pickford saving well from Kasper Dolberg in the first half and Christian Eriksen shooting over when well placed late on.

England were sterile and conservative, creating very little apart from a Kane header off target and a low shot from Raheem Sterling that brought a smart save from Schmeichel before that late chance.

England’s ploy of playing a three-man central defence and effectively two holding midfielders in Phillips and Declan Rice afforded Denmark the sort of respect that might be better reserved for more elite sides.

It set the tone for a disappointing England performance, lacking in ambition and threat and one which would not have have deserved the late victory Kane almost gave them.

There is the usual context that this is effectively a pre-season game in an international guise for England’s players but there was no excuse for such a lifeless display lacking in energy.

England’s attacking trio of Kane, Sterling and the anonymous Jadon Sancho were nowhere near their best but they could point to the fact that they were cut off from any sort of supply line by the manner of Southgate’s set-up.

The team itself had an experimental air but there was no escaping England should have done much better than this.

Shanghai could be the world’s biggest IPO market this year. But holding that title will be tough

A haunting in North Fort Myers

Shanghai could be the world’s biggest IPO market this year. But holding that title will be tough