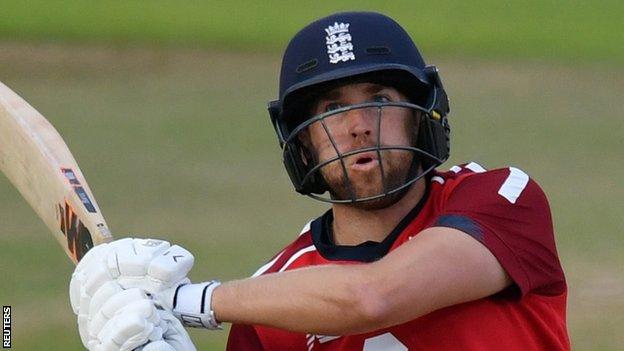 England batsman Dawid Malan has gone to number one in the Twenty20 batting rankings following the 2-1 series win over Australia.

The 33-year-old left-hander moved up four places to the top after scoring 66, 42 and 21 against Australia.

“It seems to keep getting better the more he bats and it’s great. It’s good to watch.

“He works hard to get into the team and, when he’s got his opportunity, he’s taken it. His record is brilliant at the moment, good on him.”

Fellow England batsman Jonny Bairstow has moved up three places to 19th and Jos Buttler has gone from 40th to 28th.

Spinner Adil Rashid took six wickets against Australia and has risen two places to seventh in the bowler rankings.

Australia regained number one spot in the team T20 rankings as – after losing the spot to England following defeats in the first two matches – they won the third match of the contest.

Malan’s performances mean he is now a reserve for the one-day series against Australia, with Joe Denly going back to Kent.

“The 50-over format is a tough team to get into,” added Silverwood, prior to the start of the three-match ODI series on Friday.

“If the opportunity comes around I’m sure he’ll grab it with both hands, but it may be the case he has to wait for that opportunity because it’s a tough team to get into.”