Fantasy football: Maths and patience ‘are how to win’ 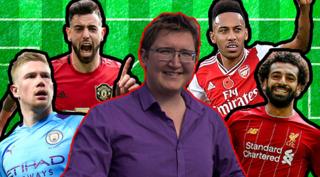 It’s the most wonderful time of the year.

Not Christmas – but the return of Premier League football, which for wannabe football managers means the return of something equally important – fantasy football.

A chance to unleash our inner Pep Guardiola, Jose Mourinho or Jurgen Klopp and win bragging rights over our mates.

But just how can you maximise your chances of winning a game with over seven million players?

With the season starting this weekend, Radio 1 Newsbeat’s been chatting to Josh Bull – a maths whiz and the man who won the official competition last season – to find out.

Josh initially started playing Fantasy Premier League to join in with his family.

“I was never expecting to be any good at fantasy football. I’ve not historically been brilliant at anything sport related, so it’s a very odd feeling indeed,” the 29-year-old says.

The free-to-enter competition is the world’s biggest fantasy football contest and involves competitors being awarded points depending on how well the players they choose do in matches in real life.

“It’s only in the last year that I decided I was going to take it seriously, see how well I could do and if I could finally beat my sister.”

And that, he did.

It’s easy to see why Josh has done so well.

Along with being the number one strategist in fantasy football, he’s a researcher at the University of Oxford’s Mathematical Institute, working on cancer research.

You might not think maths and fantasy football have much crossover, but Josh says it can help.

He analyses his strategies to see if they are “mathematically optimal approaches to fantasy football”.

“Maths is a brilliant tool for understanding complex systems. We can repurpose the tools we use to understand cancer research, to understand fantasy football in more detail.”

He uses mathematical modelling, similar to that in his cancer work, to create different scenarios and pick the one which could have the best outcome.

He says controlling everything like this leads to a “much deeper understanding” of what can impact the results.

For fantasy football, that can help in deciding which player is the best to select as captain each week – a crucial role which gets double points.

“There’s lots of different things that can impact that decision. But in a simulation, I can generate tens of thousands of teams and see what the effects of choosing my captain might be,” Josh adds.

But it’s not just about the maths.

To get the best out of his team, Josh uses a similar approach to many of the top football managers around the world.

“What works well is being very patient with my players, and being tolerant of players having one or two bad weeks.”

It’s easy to get frustrated and replace players, but “you have to accept there’s inbuilt variants in the game”.

“Even the best players can have a bad day at the office.”

Another similarity between Josh and elite managers is planning which players to pick weeks in advance.

“I think the skills that are involved to be a good football manager include thinking strategically and looking ahead and trying to plan for the long term.”

So as you’d expect, Josh has a list of players that he’ll be looking to buy in the game.

His top five players to pick if he “had unlimited money” in the game are some of the big stars of the Premier League.

“I’d definitely have Mo Salah and Kevin De Bruyne as they were good for me last year.”

Bruno Fernandes, Pierre-Emerick Aubameyang and Jamie Vardy are also on his must-have list.

Josh’s victory last season wasn’t without the late drama so typical of the Premier League.

He originally came second, but the Premier League said its initial winner Aleksandar Antonov was stripped of his crown for “a breach of our terms”.

Aleksandar said he believes this this was due to comments he made “in a moment of frustration” about a Premier League player in a private message he sent to friends which was “taken out of context”.

That pushed Josh into first place and made him number one in a game of 7.6 million people.

Even if you don’t have Josh’s maths skills, you can still do well at fantasy football, he says.

“Be patient with your players. Don’t be afraid to take some risks and make sure you have fun.”