Is NHS test-and-trace reaching 80% of contacts? 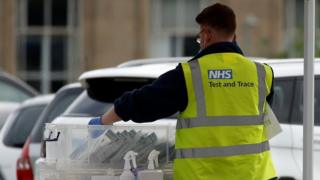 Mr Johnson said: “80% of the contacts that they identify or a coronavirus patient identify are reached and told to self-isolate”.

It’s a very important percentage because the government’s scientific advisers have recommended that “at least 80% of contacts of an index case would need to be contacted for a system to be effective”. An “index case” is somebody who has tested positive for coronavirus.

The latest weekly statistics published for the test and trace system in England by the Department of Health and Social Care (DHSC) show that 8,908 people who had tested positive for Covid-19 were transferred to the contact tracing system.

Of these, 83% were reached and asked to provide details of close contacts.

The rest were not reached because they did not respond to text, email, and call reminders, or they refused to give details of close contacts, or there were no contact details for them.

Of the 7,367 people who were reached, 18% were not able to give any recent close contacts. This was because either they had none or because they didn’t have details of people they might have come into contact with – they could have been strangers who they sat next to on a bus journey, for example.

That leaves 6,044 people who provided details for one or more close contacts. NHS Test and Trace identified 32,359 of those recent close contacts and reached 69% of them – the lowest percentage since the service launched.

If you look only at close contacts for whom contact details were provided, then 79% were reached.

It seems this figure – which was 80% for the previous week – was the one to which Mr Johnson was referring. Earlier on in his exchange with Sir Keir, the prime minister correctly qualified the number by saying “of those contacts who supply details, 80% are reached”.

However, the advice from the government’s scientific advisers refers to reaching at least 80% of contacts of all positive cases, regardless of how hard it is to get contact details.

So, although we can’t put a precise figure on it (without knowing about the contacts we don’t know about), it’s clear that NHS Test and Trace is a long way off satisfying the advice to contact at least 80% of contacts of all people who have tested positive for coronavirus.

The Department of Health and Social Care didn’t respond to the specific points raised here.

When the latest weekly figures were published, Baroness Dido Harding, who oversees NHS Test and Trace, insisted that the system “is working, and every week we consistently reach the majority of people testing positive and their contacts”.

What claims do you want BBC Reality Check to investigate? Get in touch