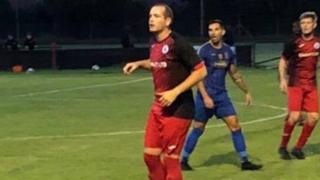 A man who lost 7st (44kg) in lockdown so he could return to football notched a hat-trick in the first league game of the season.

Kieran Amos, 24, tipped the scales at 21st 6lb (136kg) in March and had not played competitively since an ankle injury seven years ago.

But he signed for Sawbridgeworth Town FC after completing a challenge to lose 5st (32kg) by the manager.

The centre-half said his three-goal haul on Saturday was “crazy”.

Amos’s goals helped fire his side to a 5-2 victory against Southend Manor.

Four days earlier he netted a 91st-minute winner against higher division side Romford in the FA Cup extra preliminary round.

Started lockdown at 21 stone and got myself back playing football after losing 6 and a bit stone.

To say the feeling of popping up in the last minute to score the winner in the FA Cup was unbelievable. What a performance from the lads, fully deserved win. pic.twitter.com/r5lc9yTB2X

Amos, from Bishop’s Stortford, played football throughout his childhood and in the Essex Senior League before suffering an injury aged 17.

“I snapped my ankle and had to have reconstruction surgery,” he said.

“After that I went off to university and that’s where it all started in terms of the weight gain.

“I’d be going out, having a kebab after a night out and not really looking after myself or eating correctly.

“Before I knew it I’d kind of ballooned over a period of time.”

Sawbridgeworth manager Lee Mackman told Amos if he managed to lose 5st he could start training with the Essex Senior League side.

During lockdown, Amos took up running with his brother who was training to join the Marines.

“The first run I only did 1km and I stopped about four or five times,” he said,

“I started calorie counting and was running about six or seven times a week.”

By the time pre-season came around Amos had hit his weight loss target and started training with the team.

He is now down to 14st 6lb (91.6kg) and said he felt “mentally and physically in the best shape I’ve been in for a very long time”.

Amos said it was “unbelievable” to score the winner in an FA Cup game and he “didn’t think the week could be topped” until he scored a hat-trick four days later.