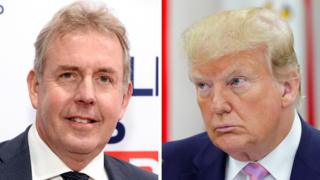 The UK’s former ambassador to the US has told BBC Newsnight he does not regret criticising Donald Trump in briefings later leaked to the media.

Kim Darroch quit last year after it emerged he described the US President’s government as “dysfunctional”, “inept” and “divided” in private letters.

The use of “clear and direct” language was not unusual for diplomats when reporting to ministers, he insisted.

But its disclosure to the media was a “vindictive” breach of trust, he said.

Lord Darroch left his post in July 2019 amid a huge diplomatic row over the leaking of a series of private cables, in which he had questioned the competence of the Trump administration and its handling of major foreign policy issues, such as relations with Iran.

In a wide-ranging interview with the BBC’s Newsnight, to be broadcast at 22:45 BST on BBC Two, he said he accepted his position had become untenable after his observations became public, leading Mr Trump to describe him as a “stupid guy” and “pompous fool”.

But he defended his conduct during his three years in Washington, saying it was the job of diplomats to report in unvarnished terms about the workings of foreign governments and how they could affect the UK national interest.

“I never regret the terms in which I’d reported,” he said. “I spent 40 years in the Foreign Office writing in these terms and people hitherto had thought it a strength and an asset.

He said he knew he was “in trouble” when a confidential letter sent in 2017 to a small group of colleagues, which described the early weeks of the Trump era as “uniquely dysfunctional”, appeared in the Mail on Sunday.

He said he did not blame the newspaper for publishing the material but believed whoever had passed it onto them had acted in an “irresponsible and vindictive” way.

Who is Lord Darroch?

If their aim had been to get him replaced by a Brexit-supporting politician, such as the former UKIP leader Nigel Farage, rather than another career diplomat, they clearly failed, he said.

“I blame the leaker taking highly classified information of the most damaging kind to me and to US-UK relations.

“If you’re in the position of having to write in code because you can’t trust your colleagues that way madness lies. You have to trust them and on this occasion that trust was misplaced.”

The Metropolitan Police launched a criminal probe into the leaking of the material in August 2019, with Commissioner Cressida Dick describing it as a “very serious crime”.

Boris Johnson, who at the time of Lord Darroch’s exit was vying to be the next Conservative leader and prime minister, was criticised for not coming out in support of the UK diplomat and insisting he must stay in post.

Lord Darroch said it would have been “nice” if Mr Johnson had done so but understood why he wanted to keep his “options open” given the ambassador had been left “dangling” by the row.

Reflecting on his time in Washington and the current state of US-UK relations, he said the US President was “not a politician” in the conventional sense and it was not a surprise that Mr Johnson was “fascinated” by him.

Asked if some of Mr Trump’s approach to politics had rubbed off on Mr Johnson, he said it may be influencing his current “negotiating style” over a post-Brexit trade deal with the EU.

The PM has been criticised for threatening to change the terms of the legally-binding Withdrawal Agreement with the EU in the event the UK does not negotiate a trade deal.

“If you go back to the PM in 2018, he said if Trump was negotiating Brexit he would create chaos at the start and people would be outraged at what he was saying and there’d be huge rows and there might be a good outcome.

“We should think about that. That’s when he was becoming dissatisfied with Brexit and now I watch the government conduct its future relationship I wonder if there’s an element of Trump.”

Lord Darroch, who became a member of the House of Lords in January, said he believed the so-called “special relationship” between the US and UK would remain strong whoever won November’s presidential election.

While Mr Johnson got on better with Mr Trump than his predecessor, this did not mean there would not be “ups and downs” if he were re-elected and that negotiations on a transatlantic trade deal would not be “difficult”.

And while Mr Trump’s Democratic rival for the Presidency, Joe Biden, was an “Anglophile”, he was vice-president in the Obama administration which famously said the UK would be at the “back of the queue” for a trade deal if it voted to leave the EU, added Lord Darroch.

“Biden said he’d have voted Remain so I have more questions about the relationship with a Democrat,” he added.

The interview will be aired on BBC’s Newsnight at 22:45 BST on BBC Two, or on iPlayer