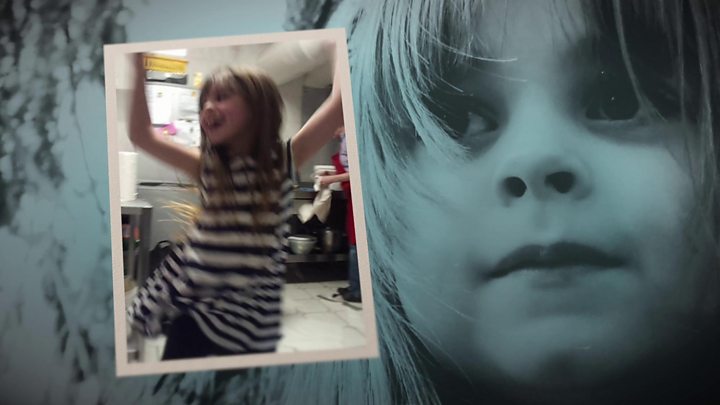 Lisa and Andrew Roussos say they feel as though they are stuck in May 2017.

That’s when their eight-year-old daughter Saffie was killed in the Manchester Arena bombing.

Saffie was the youngest victim of the attack.

A little girl with striking big eyes and a mane of dark hair, who loved dancing and making people laugh. Lisa and Andrew say she was a real live-wire who “never sat still”.

The pain of her loss is as great as ever.

“It’s not something you get over, ever,” Lisa says.

“Every morning you wake up. It happens again. She died that day, every day.

“That’s just how it is. And we have to live with that.”

Now the Roussos family and the other families bereaved that night are steeling themselves for a difficult few months.

The public inquiry into the bombing, which starts hearing evidence on Monday, will examine every aspect of the attack, including whether it could have been prevented, the emergency response and the experiences of each of the 22 people who died.

Saffie’s parents say they still feel too raw to hear information about her last moments.

“I don’t want to know about her injuries and what she went through,” Lisa says.

But the couple do have a lot of other questions which they want answers to.

“And that’s what we want out of it,” he says. “To find out why there were so many wrongs.”

Referring to the way the emergency services responded to the attack, Lisa adds: “It was just complete chaos, nobody had a clue what to do, how to react.

“It was just a complete shambles. For those people that did make mistakes, the police, fire service, MI5, for them to admit their mistakes I think would be a good thing for them, as well as us.”

She went to the concert with her big sister Ashlee and their mum Lisa.

Andrew came to collect them, with Saffie’s 11-year-old brother Xander and the family’s pet chihuahua Binky in tow.

By chance, a press photographer took some pictures of Andrew and Xander outside the arena, in the aftermath of the bomb.

You can see the shock and bewilderment on their faces, Xander clutching the dog as his father searched for his wife and children.

They came across Ashlee, sitting on the pavement outside the arena.

She was bleeding but conscious, and being looked after by members of the public.

Reassured by this, Andrew carried on looking for Lisa and Saffie.

“There were people around and they were all crying, it was just… I have no words.”

Andrew feels that the police were not in command.

“I asked every police officer that I went past,” he says.

“Nobody had control of it, because nobody gave me any indication of what to do, where the injured were.

“Nobody said to me, ‘right stay here, let me make some phone calls let me get in touch with some people and see’. They just left you to just wander round.”

They thought all of the injured had been brought out of the arena and had no idea that Lisa and Saffie were on the floor of the foyer just yards away from them.

Andrew says: “My daughter and my wife were lying on this floor. Do you know how that feels?

Father and son went to three hospitals before they found Lisa the next morning.

Andrew says: “They told me to prepare for the worst. If she was going to make it there was an 80-90% chance of her being paralysed from the neck down.”

Andrew was exhausted and already at rock bottom. But he still had hopes of finding Saffie alive.

He’d heard that children who were displaced at the arena were sheltering in nearby hotels. He grabbed a police officer at the hospital and pleaded again for information.

Fourteen hours after the explosion Andrew learned that Saffie was dead.

After multiple operations, Lisa Roussos has defied the doctors’ prediction of paralysis.

She is a gentle person with calm determination – and she rarely talks publicly about the horrors of the attack.

She tells me: “The worst thing for me was – is – if Saffie could have been saved.”

I ask her if it’s something that she plays over in her head?

“I have done, yeah,” she says. “To think that, not just Saffie, the other people. How could they leave injured people in the arena for hours? It’s just madness.

“I remember lying there thinking help will be here soon, and in the end it felt like I was lying there for hours. [I thought] ‘why is nobody coming?'”

The Roussos family also have many questions for the security service MI5.

They want to hear the detail of what was known about the bomber Salman Abedi and his brother Hashem who helped to build the bomb.

But some of the hearings involving MI5 will be held behind closed doors, without the families or their lawyers expected to be present. They’re being restricted on grounds of national security.

Lisa says: “Obviously you’re having to put your full trust in the (inquiry) chairman. But this inquiry is not about trust, it should be about transparency, and I feel that we won’t get that without having a representative in the room.”

Andrew adds: “We’ve got five or six law firms representing all the families, so let’s have one barrister from each firm in that room.

“All I hear is lessons learned, but lessons haven’t been learned, and lessons will never be learned, unless we get that transparency and honesty from the people involved to get the answers that we need.”