Manchester Arena Inquiry: Force not aware of concert ahead of bombing 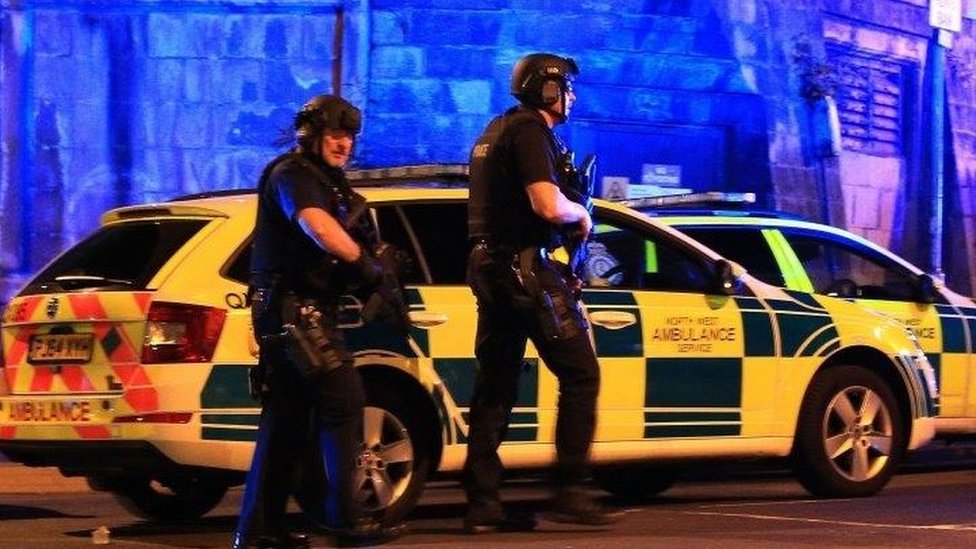 Greater Manchester Police (GMP) was not aware “at an organisational level” of the Ariana Grande concert where a suicide bomb was detonated.

Twenty-two people were killed and hundreds injured when Salman Abedi set off a bomb as 14,000 fans left the Manchester Arena in 2017.

An inquiry was told British Transport Police (BTP) had primary responsibility for policing in the arena foyer.

Counsel to the inquiry Paul Greaney QC said that may seem “surprising”.

He said BTP had “primacy” in this area due to the proximity of Victoria Station and the inquiry must consider whether that affected preparedness for any terror attack.

“There is a legitimate question about whether it was appropriate that BTP, who specialise in the railways, should take the lead,” he added.

GMP had not made plans or provision for the event, the inquiry was also told.

The second day of the hearing was told there had been multi-agency exercises rehearsing for a terror attack, including one in 2016 for an incident at the Trafford Centre.

Mr Greaney said “experts have expressed serious concerns about whether the necessary lessons were learned from it”.

Another exercise, held in July 2016, rehearsed for an attack in the City Room at the arena – the exact scene of the attack in May 2017.

The inquiry is seeking to establish whether BTP took part in that exercise.

Within 10 minutes of the bomb exploding at 22:31 BST, 12 BTP officers had run into the arena foyer carrying first aid.

“It goes without saying that all of those who responded within minutes and entered the City Room behaved with bravery,” Mr Greaney said.

There was only one paramedic in the City Room for the 40 minutes following the explosion, entering 18 minutes after the blast, the inquiry heard.

Causalities were taken out of the arena foyer on makeshift stretchers and only one actual stretcher was used on the night of the attack.

The final person was evacuated from the City Room at 23:40 on a stretcher “made of cardboard and a crowd control barrier”.

The inquiry heard how the first fire engine arrived at Manchester Arena two hours and six minutes after the explosion.

“An important issue for the inquiry to investigate will be how that came to pass and whether it made any difference,” Mr Greaney added.

He told the inquiry it was “important we acknowledge the pressure that those who responded were under”.

“The inquiry process must not be used to vilify those who did their best on the night but made mistakes and could have done better,” he added.

“We must probe deeply but fairly into the emergency response that night.”

PC Jessica Bullough, who was first to enter the foyer, described the scene of the attack as like a “war zone”.

Two minutes after the explosion, PC Bullough radioed through, saying “it’s definitely a bomb – people are injured – at least 20 casualties”.

She then “made the first of a number of requests for ambulances”.

The inquiry was told that 24 minutes later another officer radioed to control, saying “you’re going to hate me – where’s our ambulances please?”.

The public inquiry follows a trial in which a jury found Hashem Abedi guilty of helping his older sibling to plan the atrocity.

The chairman of the inquiry Sir John Saunders will make a report and recommendations once all the evidence has been heard, which is expected to take up to six months.

Analysis: The year 2020 is defined by lines

Analysis: The year 2020 is defined by lines