Manctopia: Will progress make or break this council estate? 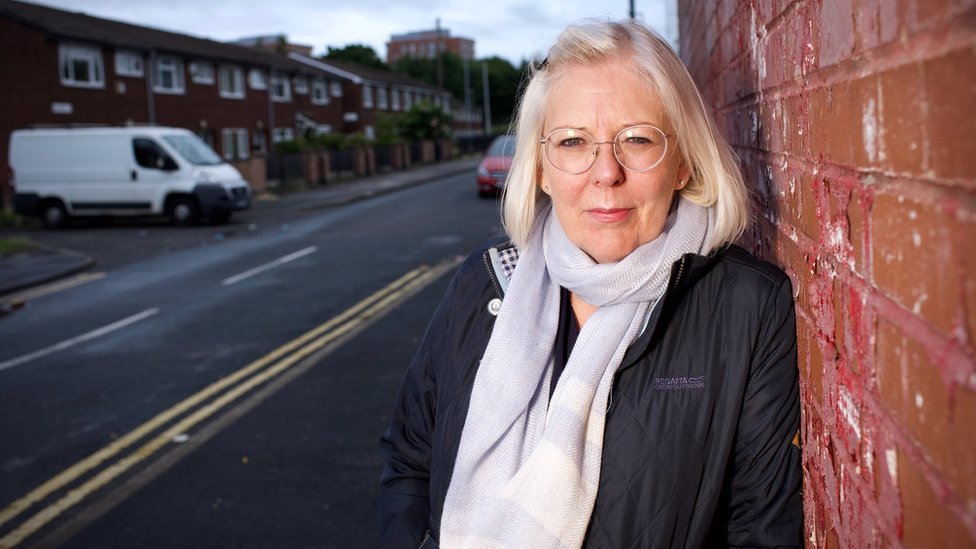 Manchester is one of the fastest-growing places in the UK. But as new and younger generations make this city their home, some older residents feel they are being forced to give up theirs – in the name of progress.

Anne Worthington is indecisive about planting daffodils in this year. She’s also worried – not so much about the flowers – but about the future.

In autumn 2018, she received a letter suggesting her home on the South Collyhurst estate, on the edge of the city centre, might be under threat to make way for thousands of new homes.

Her neighbours also received the same information and they are concerned some of their houses – and their community – could be demolished. But they have no idea when – hence Anne’s daffodils dilemma.

“I want to know their intentions regarding houses that are only 50 years old,” says Anne looking at the plans. “We are part of our history. We are 1970s classic housing. I know it’s not everyone’s cup of tea, but I’ll tell you what: it’s my cup of tea, I love it,” she explains.

A multi-million-pound regeneration project, called the Northern Gateway Development, could be about to change Anne’s community forever.

Stretching one-and-a-half miles from the edge of the city centre to the far end of the Collyhurst area in the north-east, the Northern Gateway has been described as the equivalent of a new town the size of Lancaster being built on to the side of Manchester city centre.

A joint venture between the City Council and private developer Far East Consortium (FEC), the scheme is set to build 15,000 new homes by 2038, 20% of which are outlined as affordable. The Northern Gateway aims to deliver better transport links, as well as space for new businesses, shops, facilities for health, education and public spaces.

Working class communities, such as Anne’s, fear being displaced in order to modernise the city, but many see in the Northern Gateway the kind of development Manchester has been fighting for for decades.

And with the city centre’s population set to increase by as much as 50% in the next five years, every site with potential for construction is a target for developers.

A little more than two miles from Collyhurst South is the West Tower, one of the high-rise buildings filling the horizon of Manchester. Its 44 floors are owned by pension giant Legal & General and all 350 of its apartments are only available to rent – none are social housing.

This high life vision of Manchester’s future is that of architect Ian Simpson. “When you live at the top of the building, it’s very much like you’re in an oasis almost. A little sanctuary away from the city,” says Ian.

So far, he has designed 23 apartment buildings in Manchester, which alone create 6,500 new homes.

“This is the capital of the Northern Powerhouse in my mind and it needs to be reinforced in that way,” reflects Ian while he looks at Manchester from one of the skyscrapers he has helped to create. “That sort of intensity, that’s what I would like to see and tall buildings and mid-scale buildings all play their role in that.”

Twenty minutes’ walk from the West Tower, in Manchester’s red light district, developer Tim Heatley is converting a Victorian mill into apartments. Rather than “build to rent” properties for an investor, like at the West Tower, Tim’s strategy is to sell to individual owner occupiers at a premium.

“In the past, we were trying to create new neighbourhoods within a city and people will pay for that,” explains Tim. He adds: “That’s our big gamble, really. That people will value that community over everything else.”

One person who’s bought into Tim’s vision is first time buyer Joe Parker, who is moving up from London. His excitement is obvious. “It’s great,” says Joe admiring the exposed brick walls and the mill windows in the spacious living area.

The marketing and communications manager bought one of the 126 mill apartments for £350,000 off-plan, before it was built. This is the first time he has seen his new home.

“I lived in London. It was like £1,000 a month and I just thought: ‘Why am I doing that?’ I mean, I work in London, but I’m lucky enough to work for a flexible working company that looks after people so I thought: ‘I’ve always fancied Manchester and it’s got places like this.'”

‘They assume we all live in dumps’

By February 2020, Anne was still waiting to find out whether her home could be coming down.

One of her neighbours, Donna Liley, decided to attend a community engagement meeting, hoping to get some answers. Donna’s family was one of the first to move into the area in the 70s.

Her father couldn’t think about leaving this community without getting emotional. “That’s another thing they assume when you live in Collyhurst, that we all live in dumps,” says Donna.

Attending the consultation event alongside Donna was her aunt Anne Wood. She has lived in the neighbourhood for almost 50 years.

From the streets of her estate, and staring at the skyscrapers crowding Manchester’s city centre, she complains: “Look at it, what’s nice about all that lot? Nothing. I wouldn’t go in a flat. I would not. I’m frightened to death of them.”

As part of a consultation exercise, the FEC and the council have employed a firm to host a number of sessions at the local school. Donna and her aunt are joined by other residents.

“Why would they want to demolish good standard living homes? Is that because it’s quite near to town and the land is quite valuable?” asks Donna in the meeting.

“It’s more around looking at the layout of these communities; whether there might be a way of redesigning some of these neighbourhoods to create more welcoming, successful neighbourhoods,” responds the adviser at the consultation firm.

Looking at the designs on a school desk, Donna insists: “Most people on my dad’s estate, the home owners in particular, don’t really want to go. At this moment in time, you really can’t say the Osborne Street estate will be coming down?” The adviser responds: “I can’t tell you here, today, exactly when Osborne Street would be looked at.”

The consultation firm tells Donna and her aunt that they will be feeding their concerns back, being “really clear on the strength of feeling” that they have encountered.

On the way home, Donna is feeling frustrated. “There has to be change and there has to be development, but it does not necessarily have to be at the price of completely ripping an existing community apart.” Her aunt wonders: “Not only that. They don’t build houses like we’ve got now, do they?” Donna responds: “They build shoe boxes, auntie.”

There will be daffodils – for now

Anne Worthington has done some digging of her own and managed to find out more details. At a meeting of neighbours at Donna’s house, the atmosphere is one of relief.

“They are going to build 30 houses on Collyhurst South, which is our area, but on vacant land and they will be all council,” reads Anne.

According to the latest information shared with residents, should any demolition be required, new houses will be built for council tenants and anyone who is an owner occupier will be invited to take part in shaping the project as it moves forward.

The estate’s residents have no guarantees their houses won’t eventually be pulled down, but they do now know that, at least, it won’t happen immediately. This also means good news for everyone’s garden.

“Get your daffodils in,” says Donna to her neighbours.

When the bulbs have become too crowded, daffodils can sometimes cease flowering. They may need to be lifted, divided and replanted. But if you cut them too early, the plant won’t have enough time to store energy after blooming.

As the city grows, one could think that Manchester has a lot more to do with daffodils than new and older residents may have ever thought.

You can watch Manctopia: Billion Pound Property Boom on Tuesday 8 September at 21:00 on BBC Two and afterwards on BBC iPlayer.

Ryan Reynolds doesn’t want a street named after him