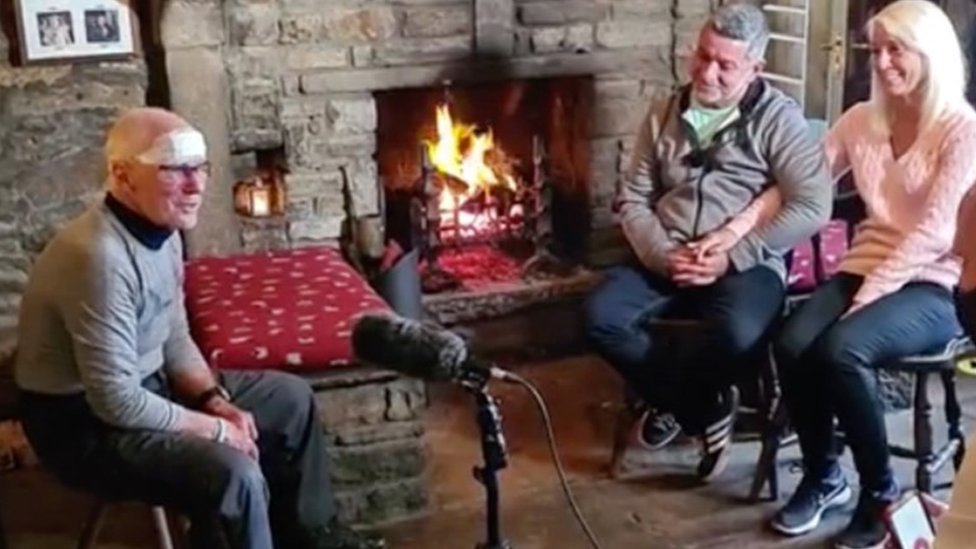 An 80-year-old hiker who went missing for three days in the Yorkshire Dales has spoken at a press conference arranged in a bid to track him down.

including police, the RAF and rescue dogs.

He was spotted by a wildlife photographer on Tuesday morning, who saw him waving at her near Keld.

Mr Harvey was about six miles (10km) from where he was last seen.

He was then taken by Land Rover to the nearby Tan Hill Inn, where he was reunited with family and friends at the press conference.

Speaking to journalists Mr Harvey, from Tynemouth in Tyne and Wear, said: “I just got separated by getting caught in a really heavy hailstorm, a howling gale of wind.

“By the time I got my kit on it was getting really dark, so I missed what I would say was a turning. I had a plan B straight away, find somewhere safe to camp, put my tent up, keep warm, and that was it.

“The biggest problem I had was getting to Tynemouth from Keld, because I only had £21.05 in my pocket.”

“The place where we got separated was absolutely desolate, there was no chance of putting a tent up that’s for sure, so I had to find somewhere safe, which is what I did.”

Mr Harvey said he was never worried as he had “all the kit and all the training”, adding he would rather not have the attention which he said was “not my scene at all”.

The experienced hiker, who was reported missing on Sunday afternoon, said he could see search teams but did not realise they were looking for him.

His family said the past three days had been “torture” and they could not put the worry they had into words.

“We know he is experienced, but not three nights, that’s taking it a little bit to the extreme,” they said.

Insp Mark Gee, from North Yorkshire Police, said: “This is fantastic news. I want to thank all the search volunteers for their time, as well as gamekeepers, estate owners, farmers and local residents for their help and understanding.

“Thanks also to the Tan Hill, who looked after the volunteers and Mr Harvey’s family.”

Annette Pyrah, the photographer who found him, said she cried when she realised it was Mr Harvey.

“I was out taking photographs of grouse and instead of grouse I found Harry,” she said.

“I had passed Tan Hill with a very heavy heart because I knew he hadn’t been found and I thought after three days he’s not going to be found. It was quite upsetting to see the police and sniffer dogs.

“I just looked up at the fell and this gentleman waved at me. I got out of my car and I said, ‘Are you Harry? Have you been missing for three days?’ And he said yes. And I started crying.”

Ms Pyrah said he had a nasty bump on the head where he had fallen into a stream, but apart from that he was fit and well.

“I got him some help for his head and he rang his wife, which was the main thing,” she said.