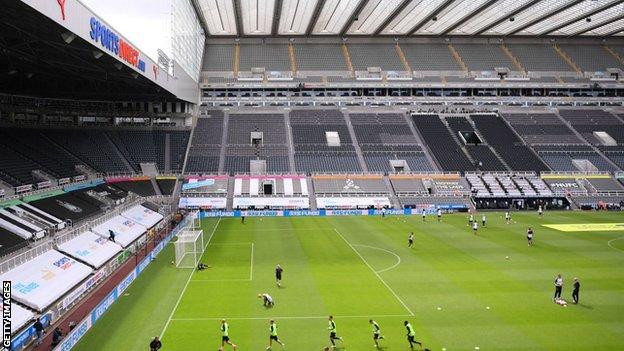 Newcastle United say they are “considering all relevant options” after claiming the Premier League did not act “appropriately” in its handling of a failed takeover by a Saudi Arabian-backed consortium.

The league wanted clarification of the links between PIF and the Saudi state.

But on Wednesday, Newcastle said the Premier League had rejected the bid.

“[Owner] Mike Ashley understands fans’ frustrations,” the club said, adding the rejection had been based on the Premier League’s owners’ and directors’ test.

However, the Premier League said in August the bid had failed after the consortium had rejected its offer of arbitration to determine who would own the club.

The consortium, which also included PCP Capital Partners and Reuben Brothers, had agreed a £300m deal to buy the club from Ashley in April.

In a statement, Newcastle added: “The club and its owners do not accept that Premier League chief executive Richard Masters and the Premier League have acted appropriately in relation to this matter and will be considering all relevant options available to them.

“This conclusion has been reached despite the club providing the Premier League with overwhelming evidence and legal opinions that PIF is independent and autonomous of the Saudi Arabian government.”

Speaking to BBC Sport earlier on Wednesday, Masters said he had “sympathy” for Magpies fans because of the lack of information they received.

“I think there is a reasonable expectation on all the parties involved for confidentiality, I think that’s what we were trying to respect,” said Masters.

Masters also said the Premier League would “look again” at the “issues and specifics” of its owners’ and directors’ test.

The bid was led by British financier Amanda Staveley, but PIF would have taken an 80% stake.

PIF’s chairman is Crown Prince Mohammed bin Salman, and it appeared the Premier League’s lawyers had been struggling to establish the precise links between the consortium and the Saudi government.

The Premier League’s rules meant it wanted to know who would have control, where funding would come from, and who would appoint the board.

Masters said that because the consortium ended its bid before the issue was resolved, there was “never any point” where the Premier League board was “asked to make an assessment on the suitability of all members of the consortium”.