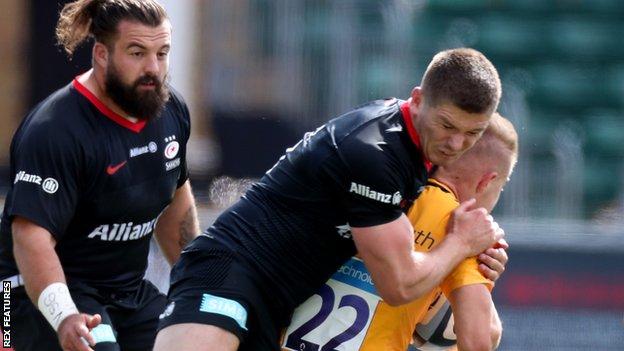 The red card for England captain Owen Farrell grabbed the headlines this weekend, although there were plenty of positive stories too, not least the return of fans at The Stoop.

Meanwhile, Ulster banished their semi-final demons in the Pro 14 to set up a an all-Irish clash with the relentless Leinster.

Here are some of the talking points from a hectic few days.

Farrell’s tackle technique has long been scrutinised, given his tendency to lead with the chest and shoulder in contact.

In the 2018 autumn series, he was fortunate to twice escape censure for ‘no-arms’ challenges, tackles that under today’s framework would have resulted in yellow cards.

For most England and Saracens fans, his physicality, robustness, and desire in defence is a fair trade-off for the occasional indiscretion.

But his wild forearm smash on Wasps teenager Charlie Atkinson was probably the worst act of Farrell’s brilliant career. It was high, out of control, and worst of all, dangerous, precisely the kind of tackle the law makers are desperately trying to eradicate from the game.

Farrell knew straight away, repeatedly telling referee Christophe Ridley “I know this was bad” before being issued the red card; the first of his professional career.

What happens now? A ‘mid-range’ punishment of six weeks (or games) is the minimum sanction he will receive, given the contact to the head, and it is the likeliest outcome unless the panel feel it is worthy of ‘top-end’ punishment, which is a rarity.

This could then be halved because of mitigating factors such as a guilty plea, good conduct at the hearing, and a good disciplinary record which – despite some public perceptions – Farrell does have.

A three-game ban would mean he would be available to captain England in their five upcoming internationals, but would rule him out of Saracens’ matches with Sale, Exeter and – crucially – Leinster in the Champions Cup quarter-final in a fortnight.

Given their impending relegation, the game with the Irish province is Saracens’ first genuinely competitive game since January – nine months ago – and they will then have a wait of almost a year before returning to top-flight domestic and European competition.

Missing the European clash will hurt both Farrell and the club deeply, and swings the balance firmly in Leinster’s direction.

While England will win in Rome with or without their skipper, it’s hard to see Saracens doing the same in Dublin without him.

Leinster on course for invincible season

Leinster’s bid for an unprecedented unbeaten season remains on track after a gritty 13-3 win over Munster in the Pro 14 semi-final, albeit in a poor spectacle at the Aviva.

There was more drama at Murrayfield, as Ulster made a stunning comeback to join Leinster in the showpiece next Saturday.

It was a breakthrough win for Ulster, who have been making great strides under Dan McFarland, but disaster for Edinburgh, who led 19-7 with 20 minutes to play.

Afterwards Richard Cockerill said Edinburgh’s senior players went missing when the heat was on. For all their improvements both domestically and internationally, this remains a familiar issue blighting Scottish rugby.

Farrell’s red card overshadowed what otherwise would have been the big story out of the English game this weekend, the welcome return of almost 3,000 fans at the Stoop for Harlequins against Bath.

Sadly for the majority of those present, the home side were outplayed by a Bath side who have been one of the league’s surprise packages post-lockdown.

Stuart Hooper’s men have taken 20 points out of a possible 25 since the resumption, thanks to a dominant pack, clever summer acquisitions such as England scrum-half Ben Spencer, and some brilliant finishing, with Ruaridh McConnochie among those in superb form.

Northampton and Quins’ defeats surely spell the end of their play-off hopes, confirming what was becoming apparent a week ago that Sale, Bristol, Wasps and Bath are scrapping for the three remaining semi-final spots.

Whether those big end-of-season games will be played in front of supporters remains to be seen, but the Rugby Football Union has confirmed its intention to host up to 20,000 at the England against Barbarians clash on 25 October, following a pilot at Twickenham.

It’s thought a Harlequins Women Premier 15s match may be taken across the road to make this happen, while Premiership Rugby says “all clubs are ready to go and keen to build on the successful match held by Quins”, with decisions on future fan attendance resting with the government.

A bumper day of rugby union worldwide began on Saturday morning in New Zealand, where the South Island pipped the North Island 38-35 to win a thriller in Wellington.

Such was the pace and skill of the encounter, Ireland and Lions great Brian O’Driscoll said on his Instagram page that it was like watching a “different sport” compared to the turgid Pro14 semi-finals, and served as a “reality check” about the gulf in quality.

Following the fixture, social media was awash with supporters picking their teams for a North England v South England clash, an idea we floated on the Rugby Union Weekly podcast in early 2019.

With Wasps, Leicester, Worcester and Northampton counting as the North, it’s possible to pick two evenly-matched teams, with players tied to the club where they made their professional debuts.

Despite telling us he would want to represent the North, Owen Farrell would have to play for the South, but Billy Vunipola would be available for North selectors given he made his breakthrough at Wasps.

Although the South may shade it on paper, any side with Vunipola, Courtney Lawes, Tom Curry, Ted Hill, Danny Care, George Ford, Manu Tuilagi and Chris Ashton would have to be taken seriously.

Winter Diet: Why You Should Have Til Ke Laddu During Winter Season