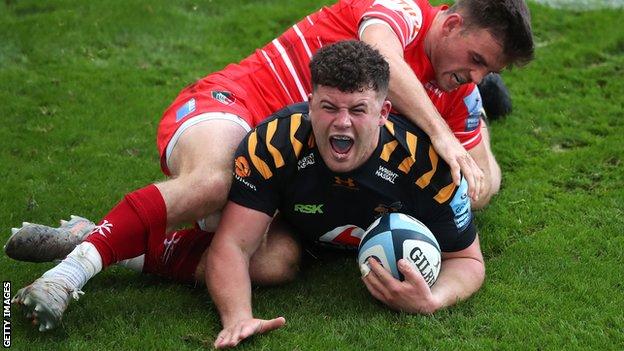 Cameron Henderson’s early score put the visitors ahead but Wasps responded through Malakai Fekitoa and Tom West as Tigers paid for their ill discipline.

Flanker Barbeary crossed three times to give the hosts control after the break.

A youthful Tigers side, captained by England prop Ellis Genge for the first time, put in a high-energy performance in the opening 20 minutes but a high penalty count proved to be their undoing.

The visitors were increasingly pinned inside their own 22 by infringements, allowing Wasps to build attacking platforms through their line-out drives.

The pattern continued after the break and Barbeary, a hooker for England Under-20s but here playing in the back row, grabbed two tries in the space of six minutes to seal a bonus point.

The Wasps back line consistently found gaps in the Tigers defence as the second half wore on, with smart offloads and good supporting runs creating scoring opportunities in a confident display.

Leicester’s problems were compounded by yellow cards for Ben Youngs and Guy Porter, and the Tigers have now suffered three straight defeats.

“Alfie [Balbeary] had an outstanding second half.

“As an out-and-out rugby player, he’s pretty good. He’s a big project and he’s nowhere near the finished article.

“There are plenty of areas of his game he needs to keep working on.

“We’re trying to manage him by picking him in the back row.

“He’s a young kid and it takes time to come through in the front row positions, but we’ll keep working on the hooker side of his game.”

“I’ve been here a very long time and that’s the biggest defeat I’ve been involved in. It’s not pretty and I feel like I’ve been punched in the face quite a few times.

“We have to learn the lessons and we must somehow get back on the horse because that wasn’t good enough.

“It’s a bitter pill. We’ve made some really positive progress in every game we’ve played but there’s an opportunity to learn some big lessons there because we were sub-standard in the second half.”