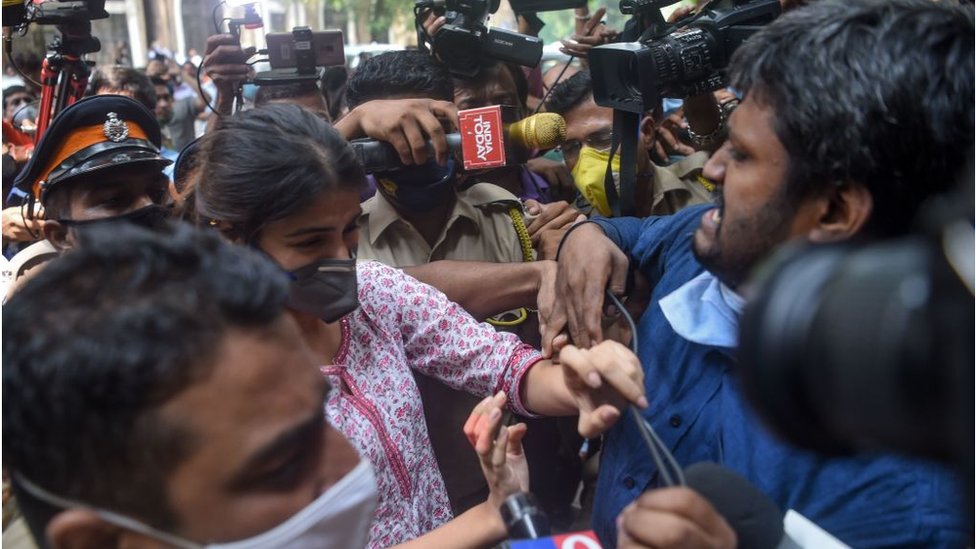 Bollywood actors and filmmakers have criticised Indian journalists for mobbing actor Rhea Chakraborty after she was summoned by federal law agencies for questioning.

Chakraborty is being investigated in connection with the death of her actor boyfriend Sushant Singh Rajput.

Rajput was found dead in his flat in Mumbai on 14 June. Police said he had killed himself.

His family has filed a case of abetment to suicide against Chakraborty.

On Sunday, the 28-year-old actor arrived at the office of the Narcotics Control Bureau (NCB), tasked with combating drug trafficking and use of illegal substances.

Visuals shared on social media showed Chakraborty pushed around as she made her way through a crowd of television crews, even as policemen tried to shield her.

Chakraborty has become the subject of gossip, innuendo and misogynistic abuse. Every little detail of her life and relationship have been laid bare and debated in public.

TV hosts have described her as a “manipulative” woman who “performed black magic” and “drove Sushant to suicide”. On social media, she has been trolled mercilessly and called a

“These people have lynched a human being of her right to live even before being proven guilty,” actress Tapsee Pannu wrote on her twitter account.

“I sincerely pray karma finds the address of each and every human being part of this lowest low of mankind we are witness to.”

A statement by the Producers Guild of India said “the tragic death of a young star has been used by some as a tool to defame and slander the film industry and its members”.

A narrative has emerged of the film industry being a terrible place for outsiders, “a murky den of abuse and criminality,” the statement added.

“But it is not the truth,” it said, asking the media to show “common human decency, and self-introspect”.

She said she could only imagine what Chakraborty’s family was going through at this time, being subject to this “so-called media-trial”.

“I am standing up for my colleague,” she wrote.

Actress Vidya Balan said that it was unfortunate that the “tragic” death of Rajput had become a “media circus”.

“In the same breath, as a woman, my heart breaks at the vilification of Rhea Chakraborty. Isn’t it supposed to be ‘innocent until proven guilty,’ or is it now ‘guilty until proven innocent,” she asked.

Actress Dia Mirza wrote on her twitter calling the media’s behaviour “reprehensible in every way”.

“Why can’t Rhea be given space and the right to physical distancing? Why are the media behaving like vultures?”

“Shame on Indian media. Shame on us for being such a toxic voyeuristic public consuming this poisonous hysteria,” actress Swara Bhaskar said.

“Congratulations India, you have arrested my son, I’m sure next on the line is my daughter and I don’t know who is next thereafter. But of course for the sake of justice, everything is justified,” he said in a statement.

His remarks came after his son, Showik, was arrested in connection with a drugs link to Rajput’s death.

Although Rajput’s death is still being investigated, much of the media has already declared the actress guilty, senior Supreme Court advocate Meenakshi Arora told the BBC.

“It’s a complete trial by media. It’s the job of the investigation and the courts, it’s not the job of media to try her. Legally, this is so wrong,” she said.