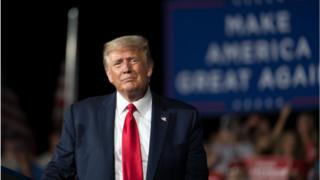 President Donald Trump knew Covid-19 was deadlier than the flu before it hit the US but wanted to play down the crisis, according to a new book.

Mr Trump told him the virus was “deadly stuff” before the first US death was confirmed, later adding he wanted to “play it down” to avoid causing panic.

The president called the book a “fake” in a tweet on Wednesday.

In the interviews for Mr Woodward’s forthcoming book, Rage, Mr Trump indicated that he knew more about the severity of the illness than he had said publicly.

According to a tape of the call, Mr Trump told Mr Woodward in February that the coronavirus was deadlier than the flu.

“This is five percent versus one percent and less than one percent. You know? So, this is deadly stuff.”

On Wednesday, some US media released parts of the interviews between the president and the journalist.

On 19 March, as the US coronavirus crisis began and the White House declared it a national emergency, the president told Mr Woodward: “I wanted to always play it down. I still like playing it down, because I don’t want to create a panic.”

Shortly after reports of the book’s claims were published, Mr Trump tweeted: “The Bob Woodward book will be a FAKE, as always, just as many of the others have been.”

He also called the storied reporter a “social pretender”, “who never has anything good to say”.

Rage will be released on 15 September.

Highlights from the '60 Minutes' interview that Trump cut short

Lewis Hamilton: ‘No concern’ he will sign for Mercedes next season – team boss Wolff