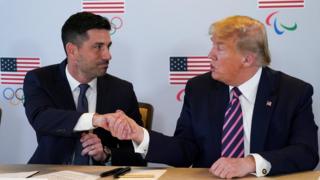 A senior intelligence official at the US Department of Homeland Security says he was pressured to downplay the threat of Russian election interference as it “made the president look bad”.

In a whistleblower complaint, Brian Murphy said he was demoted for refusing to alter reports on this and other issues, including white supremacy, as directed by the agency’s leadership.

The directives, he claims, were illegal and an abuse of authority.

The White House has denied the claims.

The complaint was released by the Democrat-led House Intelligence Committee, which has asked Mr Murphy to testify to Congress later in the month.

What are the allegations involving Russia?

Mr Murphy says that, between March 2018 and August 2020, there was a “repeated pattern of abuse of authority, attempted censorship of intelligence analysis and improper administration of an intelligence program related to Russian efforts to influence and undermine US interests”.

In mid-May 2020, he was instructed by Mr Wolf to “cease providing intelligence assessments on the threat of Russian interference… and instead start reporting on interference activities by China and Iran”. These instructions came directly from White House National Security Adviser Robert O’Brien, the complaint says.

Mr Murphy refused to comply “as doing so would put the country in substantial and specific danger”, but in July he was told the intelligence report should be “held” because it “made the president look bad”.

What other allegations are made?

Mr Murphy claims he was under pressure from the White House to exaggerate the number of migrants with links to terrorism on the US-Mexico border.

“He declined to censor or manipulate the intelligence information,” the complaint says.

The complaint also alleges that former Secretary Nielsen knowingly provided “false material information” about known or suspected terrorists apprehended at the US-Mexico border during testimony before two House committees, in December 2018 and March 2019.

That happened as the Trump administration was introducing a number of tougher measures to curb the flow of undocumented migrants reaching the border and making the case for a wall.

He said Ms Nielsen’s testimony in March 2019 included an inflated number and “constituted a knowing and deliberate submission of false material information”. Ms Nielsen resigned from the post a month later, following complaints from Mr Trump that she was not tough enough on immigration.

The complaint also details a clash with Mr Cuccinelli over a report into white supremacist groups.

“Mr Cuccinelli stated that Mr Murphy needed to specifically modify the section on White Supremacy in a manner that made the threat appear less severe, as well as include information on the prominence of violent “left wing” groups.”

Mr Murphy declined saying “it would constitute censorship of analysis and the improper administration of an intelligence program”.