‘You have to protect the grapes from getting sunburn’ 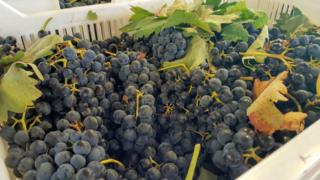 As winemakers in the northern hemisphere continue to harvest this year’s grapes, climate change is having an increasing impact on the industry.

Jack Everett had no intention of growing grapes when he started making alcoholic drinks 15 years ago – the weather was simply too cold.

Instead the Canadian farmer had his sights set on making fruit wines, from strawberries, cranberries and even rhubarb.

Today his business in the province of New Brunswick, Magnetic Hill Winery, also makes a full range of wines from grapes – white, rosé, red and sparkling.

“The reason in large part is climate change,” says the 35-year-old.

He says that 20 years ago the grapes wouldn’t have ripened enough for them to be made into a palatable wine. The summers on Canada’s east coast were not warm enough, and they were too short.

But as time progressed, he says he started witnessing changing weather patterns, like longer growing seasons, more warm summer days, and fewer late spring frosts. This is backed up by official data, which shows that over the past 30 years, average temperatures in New Brunswick have risen by 1.1C.

So 11 years ago, Mr Everett and his family took a chance on planting some grapes, an endeavour that literally bore fruit.

“I struggle with how to define my feelings towards climate change,” says Mr Everett. seeing how the world’s woes might be his gain.

Winemaker and wine educator Keith Wallace, founder of the Wine School of Philadelphia, says that “there are some countries, or regions, that might benefit from climate change, winemaking wise”.

In addition to Canada, he says the north eastern states of the US have also beneficial changes. “They now have a longer growing season, which means we can utilise different grapes than we used to.

“And in Europe, northern countries like Germany, Switzerland and the UK are now able to make wine in a way, and with a quality they have never had before.”

But where there are winners, there are also losers. In many parts of the winemaking world – the south of France, California and Australia – higher temperatures are increasingly causing problems.

When the weather is too hot, it can result in grapes that are too ripe. This leads to wines that are excessively sweet or high in alcohol.

Some studies say the situation is far more worrying, such as a report in US scientific journal the Proceedings of the National Academy of Sciences. It warned that, in a worse case scenario, as much as 86% of all grape production in France’s celebrated Bordeaux and Rhone regions could be wiped out by drought by 2050.

Unsurprisingly, French winemakers are not taking climate change lying down. In 2019 members of the two largest wine appellations in Bordeaux, on France’s Atlantic coast, voted to allow the planting of grape varieties more tolerant of hotter, dryer weather.

Across in the southern Rhone Valley’s well-known Châteauneuf-du-Pape village, Cesar Perrin’s family have owned and run the renowned Chateau Beaucastel for several generations.

The 31-year-old says he has noticed the impact of climate change on the business, particularly higher alcohol levels. He says that winemakers simply have to change with the times: “It is up to the winegrower to adapt to climate change and work differently.”

At Beaucastel they now spray a clay powder on some vines, which acts as a sunscreen for the grapes. This slows down photosynthesis, preventing the grapes from over-ripening and becoming too high in alcohol content. They are also planting more varieties that can cope with increased heat.

“It is hard to know what will happen in the future, but I believe that great wines will made in great places like Beaucastel, with or without climate change.”

However, the Perrin family is also investing in some higher altitude, and so slightly cooler, vineyards.

More from the BBC’s series taking an international perspective on trade:

Over in California, which produces 90% of US wine, vineyards and wineries are increasingly at risk from wild fires due to dry conditions, with two producers affected in recent weeks.

“We have had a five-year stretch with very little rain by our standards,” says Neil Collins, owner of Lone Madrone Winery.

He says more and more winemakers are now buying land further north in the state, where temperatures are lower.

But even in countries whose winemakers are said to be benefiting from higher temperatures, the increased heat brings problems.

Jas Swan, who has been making organic and natural wines under the Katla label for the past two years in Germany’s Mosel area, says she has to guard against some varieties of grapes getting “sunburnt”.

“It is not just about higher temperatures, as the weather is getting more extreme in general,” says the 31-year-old.

“We get more late frosts and [then when it gets hot], you have to keep the leaves in place on the vines for longer to protect the grapes from the sun.

“I also have some friends now who have to irrigate, and others experimenting with grape varieties from hotter countries.”

Wine journalist Jamie Goode, says that when it comes to climate change “there are few winners and many losers in the wine world”.

“Part of the problem is that grape varieties only perform well within narrow climatic parameters, and it takes many years to change varieties and begin getting good quality grapes.”

Echoing Ms Swan’s comments, he adds: “There are increasing problems with extreme climatic events, too – this is part of the chaos of climate change.

“Warmer springs encourage vines to bud early, and then they are at risk of frost. And hail is a big issue in many regions, and causes extreme localized damage. It is the increasing inconsistency of weather patterns which makes it hard for winegrowers to adjust.”

Californian sommelier Emily Wines, of Cooper’s Hawk Winery & Restaurants, says as some winemakers move to more northern parts of California, others will go to the cooler parts of Chile, Argentina, and New Zealand’s South Island. Or perhaps also to New Brunswick in Canada.

Mr Everett says the weather has been so good in the Canadian province this summer that Magnetic Hill Winery is due to pick its grapes a month earlier than normal.

“Harvest this year is about to start any day now, and with the best quality grapes we’ve ever had,” he says. “Normally our harvests don’t start till the first week of October.”