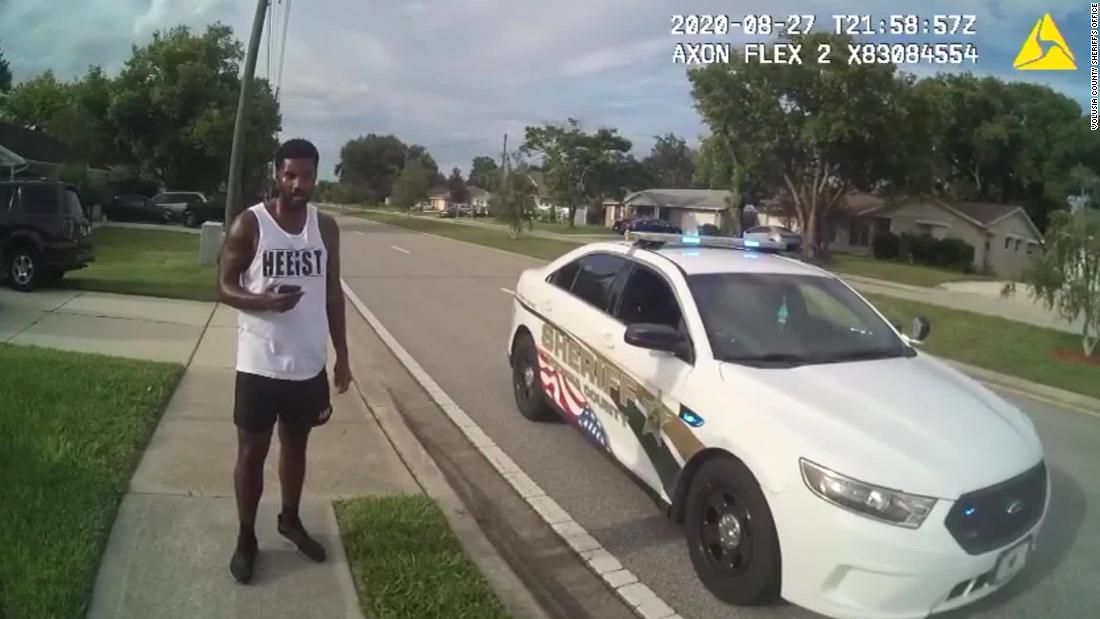 Video shared by the Volusia County Sheriff’s Office showed how the incident unfolded.

On August 27, Volusia County Sheriff’s officers were on the lookout for a man suspected of stealing a weed eater/leaf blower from a shed behind a home, according to the sheriff’s report on the incident. One deputy came upon 28-year-old Joseph Griffin, who was jogging and who matched the description of the burglary suspect.

“Hey Buddy, you’re not in any trouble or anything. There’s a burglary that happened — you kind of fit the description,” an officer is heard saying on body camera footage released by VSO as he gets out of his vehicle and approaches a sweaty Griffin. “Let me just make sure that you’re not him,” the officer says.

Griffin looks surprised when he responds saying, “Really?” and says he has his ID.

As Griffin pulls out his ID, the officer points to Griffin’s attire and says, “Literally they said, white tank top, black shorts and they said that you had a beard.”

The officer steps back and radios his colleagues while Griffin is seen on body cam footage repeatedly looking down at his phone. He started a Facebook Live and was recording the encounter.

In what appears to be an edited video of the Facebook Live posted on Griffin’s Facebook timeline, he’s seen breathing heavily and the officer can be heard telling him, “Listen, just bear with me OK? Because, you fit the description — I’m not saying you’re guilty.”

Griffin responds saying, “I know,” and then looks at the Facebook livestream.

“But my sergeant is telling me to detain you. That’s my sergeant,” the officer says.

Holding his phone up higher Griffin says, “I just had a daughter born two days ago so just have this on Live.”

“It’s live?” the officer asks. On the officer’s bodycam video, he says, “Do you mind setting it down here?” pointing to the ground.

Griffin then attempts to put his phone on the ground when the officer interrupts him and says he’ll put it on the ground for him.

“For now I’m going to detain you. But you’re not under arrest — I’m detaining you right now because you fit the description,” the officer is heard saying on body camera footage.

Several police sirens are heard approaching in the background as Griffin is handcuffed and then seen looking down at his phone on the ground repeatedly saying, “If something happens to me, you all better raise hell.”

“By the way, I’m live too, I even got a recording,” the detaining officer says.

Griffin was eventually released once officers cleared him of any involvement in the crime. Police ultimately determined that Griffin was detained in error and the real burglary suspect was later identified and arrested. But VSO says this case may yet yield a positive outcome.

“We knew we were going to get beat up, criticized, a bit because there were several officers there. It never looks good. But then I was shown the body camera video,” Sheriff Mike Chitwood told CNN. “I watched the video. Mr. Griffin was great with my deputies. And my deputies were extremely professional. I called each and every one of them to thank them for their professionalism. I called Mr. Griffin, too, and thanked him for how he handled the situation. When you get stopped by police this is how to act. This really is a teachable moment. We can learn from each other.”

“I learned that Mr. Griffin was a former military police officer. I asked if he would come in and do trainings with our entire staff. He was surprised about it and agreed. Due to Covid-19 we can only train 20 people at a time. We will start trainings early October and keep doing it,” Sheriff Chitwood added. “I also offered him a job. We have 40 openings now. But he declined that offer saying he had a job in healthcare.”

No stranger to policing amid controversial race relations issues, Sheriff Chitwood has participated in several roundtables, discussions and meetings in attempt to ease and racial tensions in Volusia County.

CNN made several attempts to reach Griffin, but was unable to make contact.