Barr has brought DOJ to a dark new low (opinion) 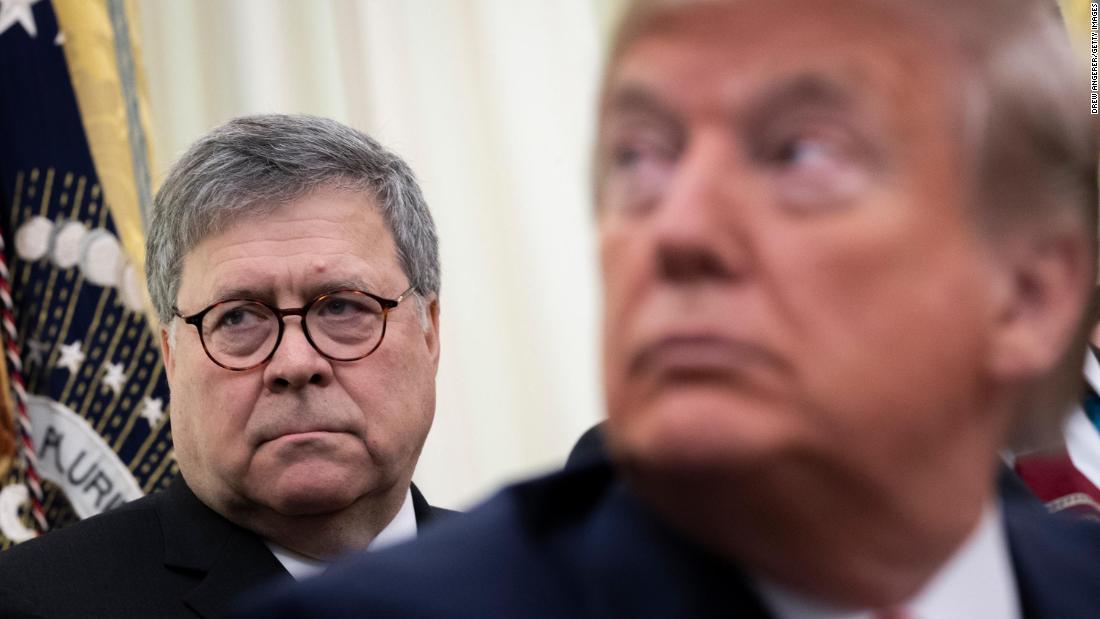 Somehow he has determined that it is within the official duties of the President of the United States, when accused of rape, to call the accuser a liar — thereby making defending Trump in this case an official matter for the DOJ, the entity whose mission statement begins with the words: “To enforce the law and defend the interests of the United States according to the law.”

George Washington, Abraham Lincoln and Franklin Delano Roosevelt — presidents who fought to establish and preserve the ideals the United States should stand for — must be turning in their graves.

Trump’s accuser, E. Jean Carroll, alleged publicly that Trump sexually assaulted her in a New York City department store in the 1990s. Trump denied the allegations in June of 2019, claiming he did not know Carroll, it “never happened” and “she’s not my type.” Carroll then sued Trump for defamation in New York State court.
Things got even worse for Trump from there. Carroll sought to obtain a DNA sample from Trump; Trump objected on the basis that, as sitting president, he cannot be compelled to produce evidence. The judge rejected that argument and kept the door open to Carroll eventually obtaining Trump’s DNA sample as part of ongoing discovery in the case.
Enter Barr and the Justice Department, which asked on Tuesday to take over representation of Trump in the civil case. The law permits the Justice Department to represent a federal official in a lawsuit if the suit applies to acts taken in the course of official business.

So, for example, if a president gets sued because he issued an executive order or signed a law, then clearly that is part of his official duties and the Justice Department properly represents him. On the other hand, if the president gets sued because he was in a car accident or because of a private real estate deal gone bad, that’s not part of the job and the Justice Department has no business on the case.

It seems very clear which side of that line Carroll’s suit against Trump should fall. On Wednesday, Barr defended the DOJ move, saying: “Officials who are elected and answer press questions while they’re in office, even if those questions relate to their personal activity, and could bear upon their personal fitness, is in fact in the course of federal employment,” and arguing “this was a normal application of the law.”

But here we are: Barr is willing to stretch the law, logic and common sense so far that he claims that getting accused of rape, denying it, and getting sued is just part of the job. Hence, according to Barr, it is appropriate for the Justice Department to handle Trump’s defense. This is every bit as crazy as it sounds.

And there’s an added bonus: the tab for Trump’s defense will now be paid by American taxpayers. How do you feel about your tax dollars going to the Trump defamation defense?

The outlook isn’t entirely rosy for Trump here. Carroll’s attorneys seek to take Trump’s deposition and to obtain a DNA sample to be matched against a sample Carroll claims is from Trump at the time of the alleged assault; Trump’s attorneys have resisted at every turn. But it appears that Trump’s legal machinations, aided by Barr, will at least allow Trump to run out the clock and drag out the litigation beyond Election Day. There’s little chance that any dispute over the Justice Department’s representation of Trump, and the pending discovery disputes in the case, will be resolved before November 3.
If we’ve learned one thing about Barr, it’s this: any time you think he has bottomed out in his willingness to shill for Trump, he finds something even lower — distorting the Mueller report, intervening in the politically-charged prosecutions of Michael Flynn and Roger Stone, spouting unsupported talking points claiming a threat of fraud in mail-in balloting, to name a few. Once again, Barr has outdone himself in degrading the Justice Department to do Trump’s bidding.

Terry (North Carolina): Attorney General William Barr seemed unsure whether it is illegal for people to vote twice. Is there any ambiguity in the law that could have been causing him to hesitate?
Nobody can legally vote twice, anywhere in the country. It is against federal law, and the law of every state, to vote twice in the same election. It also violates one of our core Constitutional principles: “one person, one vote.”
It was surprising, to say the least, that Barr acted as if he didn’t know this. There are only two realistic explanations: either Barr is woefully underinformed on the issue — which would be unforgivable in an attorney general — or he was reluctant to say something that is obvious but undermines President Trump’s prior statement encouraging voters to try to vote by mail and then again in person.

Sherry (Florida): Could there be legal consequences to the President or anyone else for using the White House and official federal government property as part of the Republican National Convention?

The Hatch Act is the federal law that, in general, requires that politics be kept separate from the federal workplace. Violations of the Hatch Act can carry both civil penalties (including fine, suspension, and removal from an official job) and it is a federal crime to “intimidate, threaten, command, or coerce” a federal employee to engage in political activity. The Act’s civil provisions do not apply to the president and vice president, but they do apply to other federal executive branch employees.
The US Office of Special Counsel is responsible for investigating potential Hatch Act violations. It seems, at a minimum, that this office should take a look at the participation of executive branch officials including Secretary of State Mike Pompeo and Acting Secretary of Homeland Security Chad Wolf in the overtly political convention, and the staging of a convention rally on the White House lawn and the National Mall. (Pompeo said, of his RNC appearance from Jerusalem, that “the State Department reviewed this. It was lawful … and I personally felt it was important that the world hear the message of what this administration has accomplished.” And ABC’s Jonathan Karl asked Wolf if he knew footage of a naturalization ceremony — at which the President was present — would be played at the RNC, he replied, “No.”)

John (Illinois): Why did the Manhattan District Attorney’s office agree to put its subpoena to Mazars (Trump’s personal accounting firm) for Trump’s tax returns on hold pending appeal? Does this signal some weakness or reluctance by the DA?

No; this is a standard procedural move and does not reflect on the merits of the case or the likelihood that either side will prevail.

In July 2020, the Supreme Court rejected by a 7-2 vote Trump’s argument that he is immune from a subpoena while in office. The court sent the case back down to the district court (trial court) level to consider any remaining arguments by Trump seeking to block the DA’s subpoena on Mazars. The district court forcefully rejected those arguments in August 2020, and Trump appealed to the Second Circuit Court of Appeals.
By agreeing to a temporary delay, the DA has not given any ground on the substance of the case. Rather, he has agreed in essence to allow the Court of Appeals to make its ruling before he enforces the subpoena. This is fairly standard practice, as it reflects the notion that parties to a dispute should have a chance to have an appeal heard before a judgment becomes final. I’ve argued in front of this Court of Appeals many times, and I expect the Court will reject Trump’s remaining arguments.

1. Will the Justice Department announce new charges arising from the John Durham investigation of the origins of the investigation of Russian interference in the 2016 election?
2. Will the Second Circuit Court of Appeals put an end to Trump’s efforts to prevent the Manhattan District Attorney from obtaining his tax returns?
3. Will Republicans’ efforts to limit mail-in balloting succeed in the courts?