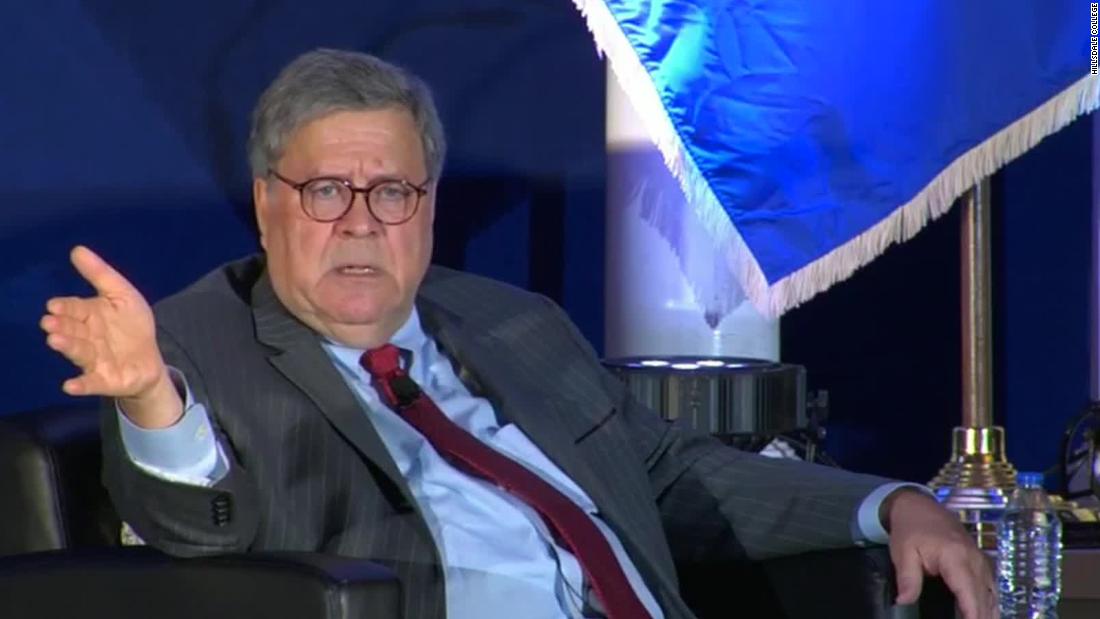 In a speech intended to celebrate Constitution Day, Barr used inflammatory rhetoric to take aim at everything from “headhunting” prosecutors to Black Lives Matter to Covid lockdowns. In the days after, some prosecutors sought to reassure colleagues that their work can continue without interference and that Barr’s language, especially when he was denigrating those who work for him, was mostly focused on the internecine political fights ongoing in Washington.

“Not helpful,” one senior Justice official said even as the Barr was making his remarks.

Another senior department official described internal meetings with career prosecutors in the days after the Hillsdale College remarks and called it a “deep blow to morale.”

Inside the Justice Department some officials describe a measure of fatigue with the attorney general’s and the President’s atypical public commentary.

There’s disquiet about claims of political taint on decisions under Barr, but there’s also reticence among career officials to speak up or become whistleblowers because many officials have calculated that it’s safer just to wait him out through the election. Even the open letters signed by hundreds of former Justice Department officials criticizing Barr’s decision-making have become less frequent in recent months.

“Most people are hanging on and hoping for a change,” a former top Justice Department official said.

RELATED: DOJ looked into the possibility of charges against local officials in Portland

On the attorney general’s mind was a small subset of cases that he has taken an interest in, supporters of Barr say, that have been at the center of criticism of him: His intervention to overrule career prosecutors on a sentencing recommendation in the case of Roger Stone, who has since received a sentence commutation from Trump. And his decision to drop charges against Michael Flynn, the former national security adviser who twice pleaded guilty to criminal charges.

“Letting the most junior members set the agenda might be a good philosophy for a Montessori preschool, but it’s no way to run a federal agency,” Barr said.

Barr spent weeks honing a speech that borrowed heavily from Justice Robert Jackson, a former attorney general and Supreme Court justice during the 1940s who whose Rule of Law ideas are revered among DOJ officials.

Then Barr took the stage at a suburban Washington hotel for an event for Hillsdale College in Michigan and added some additional remarks during the speech and in a question-and-answer session that he joked were designed to get applause from his conservative audience.

The essence of the speech, that the US system is designed to give Barr and other political appointees the role as final decision makers over career officials, is uncontroversial. But Barr has a gift for mixing academic meditations with assertions that play into Trump’s worldview.

The emphasis on leading from the top-down mirrors an approach the Trump White House has embraced, pushing agencies to protect the President personally and refusing to cooperate with several oversight attempts.

Even before the Hillsdale speech, Barr had taken up the President’s unsubstantiated accusations of widespread fraud with mail-in voting expansions prompted by the pandemic.

Then on Wednesday, after months of making guarded criticisms of localized Covid restrictions, Barr unleashed against the idea of nationwide lockdown that has never existed. “Other than slavery, which was a different kind of restraint, this is the greatest intrusion on civil liberties in American history,” Barr said.

Of Black Lives Matter protesters, whom Barr and Trump have tried to paint broadly as violent extremist mobs, Barr said: “They’re not interested in Black lives. They’re interested in props. A small number of Blacks who are killed by police during conflicts with police. Usually less than a dozen a year, who they can use as props to achieve a much broader political agenda.”

In describing his position as the ultimate boss at the Justice Department, he said: “As I say to FBI agents, ‘Whose agent do you think you are?'” noting that all who work under him are “agents of the attorney general.” The next day, Wray testified to Congress, and Trump tried to undercut Wray’s assertions in a pair of tweets.

Wray, asked about Barr’s comments by a Democratic Rep. Val Demmings at a House hearing Thursday, said. “I’m not familiar with that particular comment from the attorney general, I will say, we, the FBI, work for the American people.”

Even before this week, Barr had strained relationships with the federal prosecutors in field offices across the country, after forcing out leaders in Washington, DC, and Manhattan offices, and appearing to stay more focused on matters of interest in Washington rather than offering support to prosecutors across the country — a stark difference from his predecessor Jeff Sessions.

For months, some career and even political appointees in the department abided the political overtones of the attorney general’s regular interviews in conservative media because Barr is deeply supportive of law enforcement programs that are at the core of Justice Department agencies.

But after Barr embraced being the face of a heavy-handed crackdown on protesters at Lafayette Square In Washington, to make way for Trump photo-op in front of St. John’s Church, reaction inside the Justice Department was shock, some senior Justice officials said. For the first time in his current tenure, some Justice prosecutors outside Washington expressed concern about the effect on morale.

The negative reaction to Barr’s comments this week prompted the Justice Department to try to remind of the core message he was trying to impart.

“I encourage people to read this speech for themselves. It is a speech on the model prosecutor, for whom the attorney general has the highest respect,” Kerri Kupec said on Twitter on Thursday.

Rich nations had vaccine options after AstraZeneca and J&J faced clot reports. Others may not have that luxury

Greensill: A political scandal is swirling in Britain. But Boris Johnson is unlikely to drain the swamp