Belarus: The West can gnash its teeth. But there’s little it can do to change things 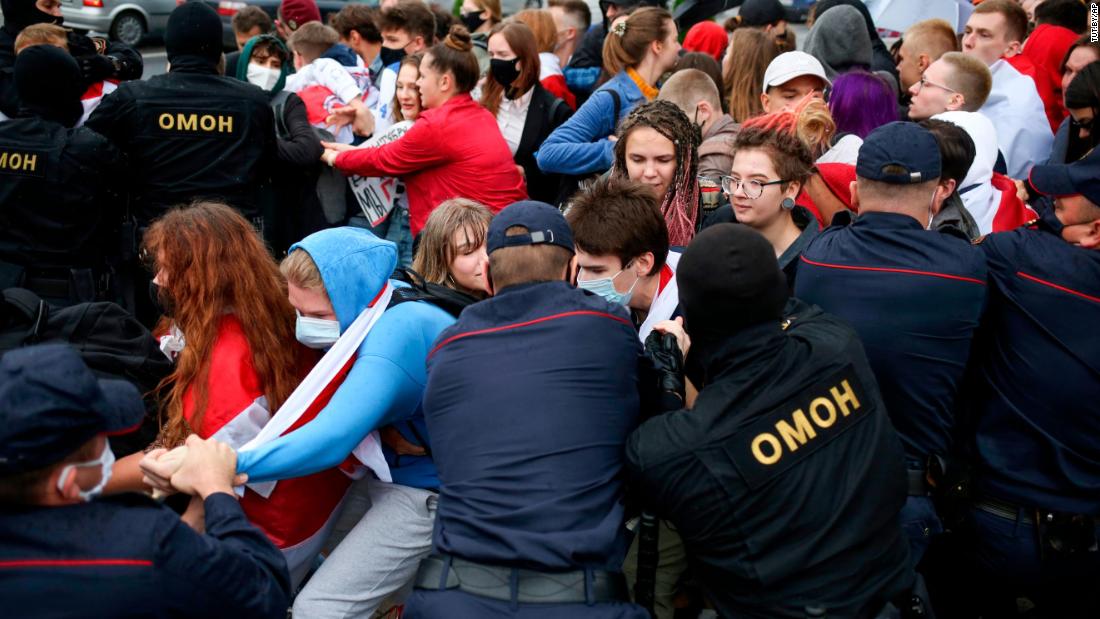 Exactly a month after a hotly disputed election, Belarus’ long-time leader, President Alexander Lukashenko, is trying to “disrupt the opposition’s ability to sustain large-scale protests by arresting or expelling all organizers,” according to the Institute for the Study of War in Washington, DC.

After the vote in August, election officials declared a landslide victory for Lukashenko, ushering in his sixth consecutive term. But opposition activists documented widespread irregularities, and street protests erupted. They’ve been continuing ever since, especially at weekends, despite heavy-handed action by police.

The international community looks on in anger — but has few tools to influence events.

Svetlana Tikhanovskaya, who was the opposition candidate in the August poll and is now in Lithuania, told CNN’s Christiane Amanpour Monday that “at the moment, members of the Coordinating Council I created are chased, kidnapped and harassed.”

One of the few members of the Council still in Minsk, Maxim Znak, was reported to have been taken from his office by masked men early Wednesday. He texted an associate with the word “masks.”

Another Council member, Maria Kolesnikova, “ripped up” her passport and climbed out of a car window to avoid being forcibly expelled to Ukraine on Tuesday, according to two fellow activists now in Kiev.

Kolesnikova is currently being held in a prison in central Minsk, her spokesperson Gleb Germanchuck said Wednesday. Her father received a phone call from a representative of the Investigation Committee of Belarus, informing him that his daughter was being held at an Interior Ministry detention center in the capital, Germanchuck said.

In interviews with Russian media on Tuesday, Lukashenko reiterated his determination to stay in office. He said he would not resign because his supporters would be persecuted; and only he was capable of protecting Belarus against what he has called a hybrid war being waged by the West.

Amid the stalemate, the United States and Europe are edging towards some form of sanctions against the Belarus’ leadership. In a statement Tuesday, US Secretary of State Mike Pompeo condemned the detention and expulsion of opposition leaders and said: “The United States, in coordination with our partners and allies, is considering additional targeted sanctions” to hold Belarus officials accountable.

European Union states have also been vocal about attempts to stifle the opposition. On Tuesday France condemned the “arbitrary arrest and forced exile” of opposition figures. It too called for “the swift adoption by the EU of sanctions targeted against those responsible for the crackdown against the Belarus population.”

So far only the Baltic states — Estonia, Lithuania and Latvia — have actually introduced sanctions, in the form of travel bans on Lukashenko and 29 other Belarusian officials. That’s unlikely to shake a regime that has spent more than two decades consolidating its control and snuffing out dissent.

The rest of the European Union seems likely to follow the Baltic lead, though it’s already three weeks since the bloc’s foreign ministers agreed to draw up a list of Belarusian officials to be sanctioned.

A senior German politician, Manfred Weber, said in an interview Wednesday that “Europe must quickly agree on a list of sanctions. And from my point of view, it should include Lukashenko, the head of this system.”

But targeting the assets and/or travel of Lukashenko and his circle would be more symbolic than substantive. This is not a group that’s deeply dependent on the outside world.

Deeper sanctions — against Belarus exporters, for example — would have a marginal effect. Belarus is not economically beholden to western Europe. The EU accounts for less than 20% of Belarus’ trade; Russia accounts for 49%. The EU had already suspended moves towards closer economic relations with Belarus until political and civil conditions improved.

In any case, the US and EU are unlikely to countenance a broader sanctions regime that would hurt the population and possibly give Lukashenko ammunition for his claims of a western plot against him.

Lukashenko could also retaliate. For example, Lithuania earns substantial transit revenue for goods flowing between Belarus and the outside world. Many European exports to Russia cross Belarus.

One European diplomat said EU governments were also wary of pushing Lukashenko closer to Moscow, even though in recent years he has tried to distance Belarus from the Kremlin’s influence. Russian President Vladimir Putin recently pledged to deploy police reservists to Belarus if the protests turn violent.

On Tuesday Lukashenko told Russian interviewers that America’s ultimate aim was not to influence events in Belarus but to create unrest in Russia. “Their main goal is Russia. There, do not relax!” he was quoted as saying in Russian state media reports.

The Institute for the Study of War highlights Lukashenko’s recent proposal to amend the Belarus constitution, which was welcomed in Moscow, saying it “presents opportunities for the Kremlin to secure provisions granting Russia additional strategic basing rights in Belarus.”
Additionally, Belarus’ economy is in bad shape, with its foreign reserves down to about $4 billion and its currency sharply lower since the election. Anders Aslund, a senior fellow at the Atlantic Council, says an IMF bail-out is one option. The other “is that Russia bails out Belarus, as it has done repeatedly in the past” — a move that would “render Belarus a state captured by Russia.”

There is the possibility — albeit slim — of a peaceful transition in Belarus, which may influence the view in Brussels and Washington. Lukashenko acknowledged on Tuesday: “Maybe I have sat in the President’s chair a little too long,” but insisting that at present “only I can protect Belarusians.”

An added complication is that the European Union, and Germany especially, is already grappling with how to respond to the poisoning of Russian opposition leader Alexey Navalny, currently in hospital in Berlin.

German Chancellor Angela Merkel is under pressure at home to cancel the Nord Steam II gas pipeline between Russia and Germany, which is nearly complete. Belarus, incidentally, is due to receive substantial transit fees if and when the gas starts flowing.

For now, Lukashenko seems to believe he can outlast the protests. Labor unrest, which would severely damage the economy, has been sporadic — with workers fearful of losing their jobs. The protest movement lacks structure and now leadership. And the West is not ready for draconian action against Lukashenko and his circle.