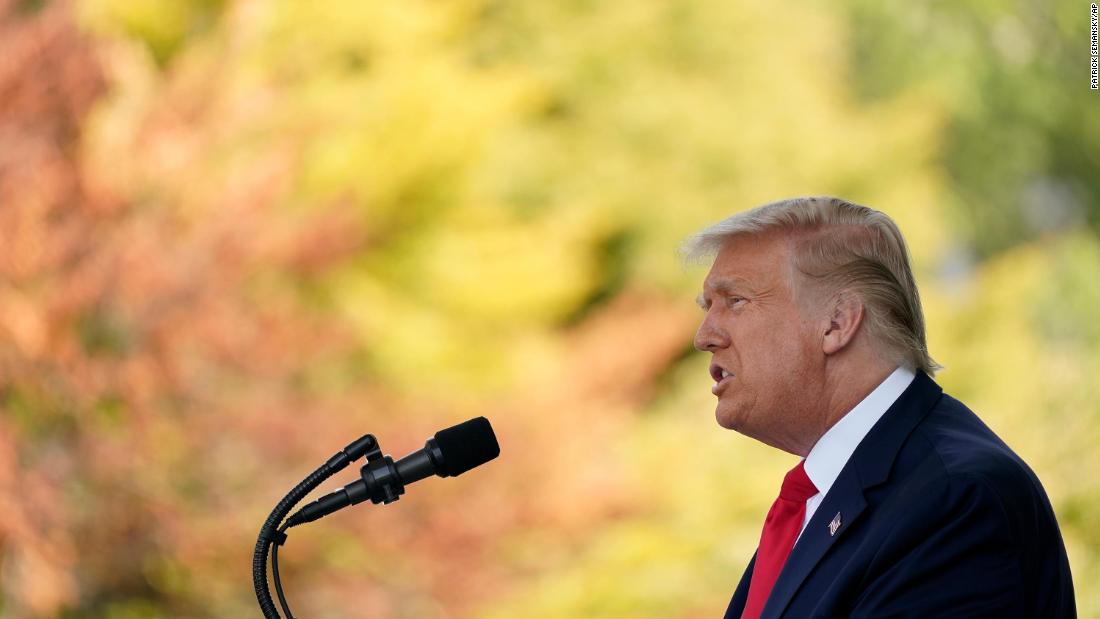 In all, CNN counted at least 11 outright falsehoods and a few more that were misleading or lacked context.

We’re updating as we go, but here’s a look at so far at the President’s claims and the facts behind them.

Echoing comments he made in August, Trump claimed “Biden’s plan for the China virus is to shut down the entire US economy.”

Facts First: Biden has not announced any such plan for combating the coronavirus pandemic but has said he would be prepared to call for a shut down if scientists recommended doing so. It’s also worth noting that presidents cannot single-handedly “shut down” the country.

You can read more about Biden’s comments on his plan for addressing the pandemic if elected here.

Trump again claimed that he instituted a law that would send people to prison for 10 years if they tore down a monument or statue.

Trump issued an executive order on June 26 to, among other things, direct the attorney general to “prioritize” investigating and prosecuting certain cases of vandalism — especially of monuments and memorials of US veterans — in accordance with “applicable law.”
One of the laws cited in the order is the “destruction of government property,” which carries a potential “fine of up to $250,000, ten years imprisonment, or both” if the purposeful damage to government property exceeds $100. The law has been around since 1964.
Trump also cited the Veteran’s Memorial Preservation Act, passed in 2003, which carries a fine and/or imprisonment of up to 10 years for those convicted of vandalizing or destroying monuments, plaques, statues or other property “commemorating the service of any person or persons in the armed forces of the United States.”

These laws have been on the books for years. Trump has not recently authorized the Department of Justice to pursue these cases but has ordered the attorney general to prioritize them.

In referencing US aid to Ukraine, Trump compared his record to President Obama’s.

“They used to send pillows and we send tank busters,” Trump said.

Facts First: While the Obama administration was criticized for its refusal to provide lethal assistance to Ukraine, it did provide more than $100 million in security assistance, as well as a significant amount of defense and military equipment.

Trump said twice that NATO member countries were increasing their spending to $400 billion a year.

Facts First: NATO Secretary-General Jens Stoltenberg said during a meeting with Trump on December 3, 2019 that, by 2024, non-US members will have spent a total of $400 billion more on defense than they did in 2016 — not that they will be spending $400 billion more “a year.” And since these predictions were made prior to the coronavirus they don’t take into account the possible impact of the current pandemic, NATO spokeswoman Peggy Beauplet noted in an email to CNN in August.

You can read more about Trump’s claims on NATO spending here.

Trump said he’s “looking at the World Trade Organization” out of concerns the US is not being treated fairly because “we never used to win anything.”

Facts First: Contrary to Trump’s repeated assertion, the US has long won cases at the World Trade Organization. Trump’s own Council of Economic Advisers even said in a February 2018 report that the US had won 86% of the cases it has brought since 1995. The global average was 84%, according to the council.

You can read more about the US history with the WTO here.

The President claimed that the US has one of the lowest case fatality rates for Covid-19 among developed countries.

Facts First: The US does have one of the lowest rates of case fatalities — which measures the number of deaths from the virus over the number of cases. But Trump fails to mention that the US has among the highest mortality rates — a measurement of the number of deaths per 100,000 people — in the world with over 100 countries with lower death rates.

Trump suggested that it is possible a vaccine is approved before election day, November 3.

Facts First: Experts who are currently running some of the vaccine trials tell CNN that this timeframe is unlikely. Even when one is approved, it will likely still be many months before a vaccine is widely available across the US.

Trump said that Harris was “the most liberal person in Congress.”

Facts First: Harris’ voting record in the Senate is certainly one of the most liberal, though her record prior to the Senate is more moderate on some issues.