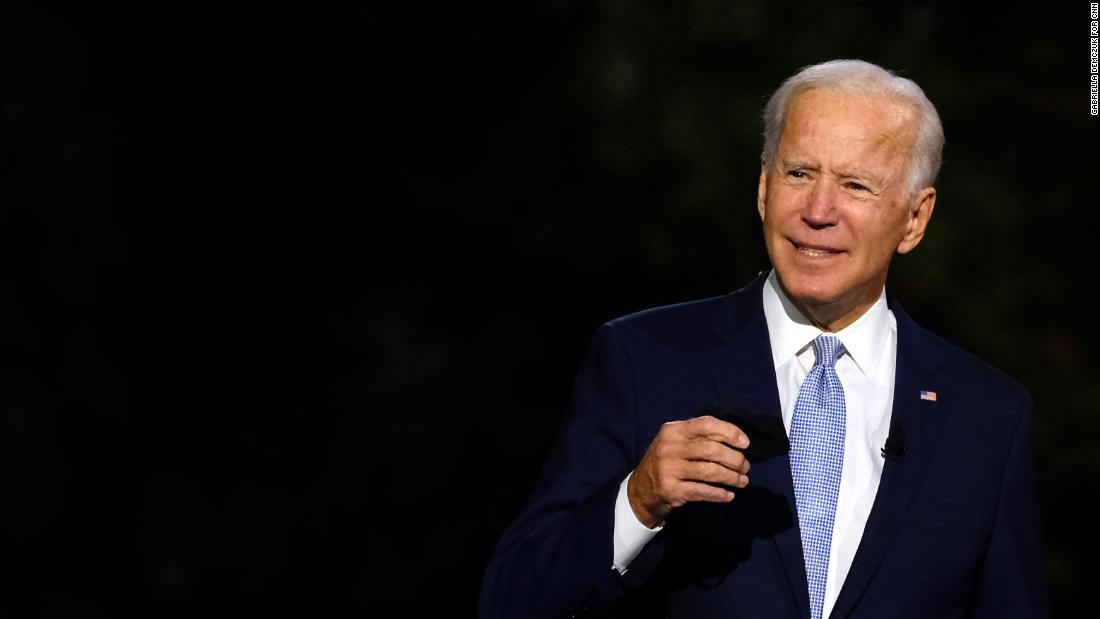 Over the course of the night, Biden took questions ranging from farming regulations, the military presence in Afghanistan, to how he would approach the coronavirus pandemic.

Biden made a few errors and misleading statements on the drive-in stage. Here’s a look at the facts:

Biden claimed Dr. Robert Redfield, director of the US Centers for Disease Control and Prevention, contradicted President Donald Trump’s stance on mask usage by suggesting widespread mask wearing could save 100,000 lives between now and January.

“By the way, his own CDC director contradicted him recently. He said, if, in fact, you just wore this mask, nothing else but this mask, you would save between now and January another 100,000 lives,” Biden said.

Facts First: While Redfield did advocate for wearing masks to stop the spread of coronavirus in a congressional hearing Wednesday, and Trump did later say that Redfield misspoke, CNN could not find any record of Redfield providing these specific numbers concerning the number of lives that could be saved by mask-wearing.

Testifying before a Senate Appropriations subcommittee on the government’s response to the coronavirus pandemic, Redfield said, “I’m not going to comment directly about the President but I am going to comment as the CDC director that face masks, these face masks, are the most important, powerful public health tool we have.”

“I will continue to appeal for all Americans, all individuals in our country, to embrace these face coverings,” Redfield added. “I’ve said it, if we did it for six, eight, 10, 12 weeks, we’d bring this pandemic under control.”

He made headlines for further saying, “I might even go so far as to say that this face mask is more guaranteed to protect me against Covid than when I take the Covid vaccine.”

Reached for comment, the Biden campaign pointed CNN to the latest forecast from the University of Washington’s Institute for Health Metrics and Evaluation (IHME). As of early September, the IHME model predicts 224,000 more people in the US could die from the coronavirus by January, but with near-universal mask use the number of projected additional fatalities could decrease by more than half, or at least 100,000.

CNN has reached out to the CDC for comment.

Biden said the protesters were removed so Trump could “walk across to a Protestant church and hold a Bible upside down — I don’t know if he ever opened it — upside down, and then go back to a bunker in the White House.”

Facts First: Biden gets two facts wrong here. Trump did not hold a Bible upside down and his visit to the bunker was a few days before this event.

On May 29, Trump was briefly taken to a White House bunker amid intense protests that evening. This was three days before the visit outside of St. John’s.
While posing in front of the church, Trump held a Bible out for the cameras. Photos and videos show that Trump held the Bible right side up.

According to Biden, the media claimed his election would set a precedent.

Facts First: Not all past presidents graduated from college, let alone from the Ivy League. If elected, Biden would be the first president without an Ivy League degree since Ronald Reagan.

Facts First: Barr did not say lockdowns are “equivalent” to slavery. Rather, he said, “Other than slavery, which was a different kind of restraint, this is the greatest intrusion on civil liberties in American history.”
Barr’s claim is absurd given that American history has involved the internment of citizens of Japanese origin, official segregation of Black people, and the killing and forced relocation of Native Americans, but Biden did not accurately describe what he said.

State of the Union

During the town hall, Biden criticized Trump for not warning the US about the coronavirus during this year’s State of the Union address.

“Imagine had (Trump) at the State of the Union stood up and said — when back in January I wrote an article for USA Today saying, ‘We’ve got a pandem-we’ve got a real problem’ — imagine if he had said something. How many more people would be alive?” Biden said.

Protecting Americans’ health also means fighting infectious diseases. We are coordinating with the Chinese government and working closely together on the coronavirus outbreak in China. My administration will take all necessary steps to safeguard our citizens from this threat.

The USA Today article Biden wrote on January 27 criticized Trump’s rhetoric around and approach to the coronavirus, writing, “The possibility of a pandemic is a challenge Donald Trump is unqualified to handle as president.”