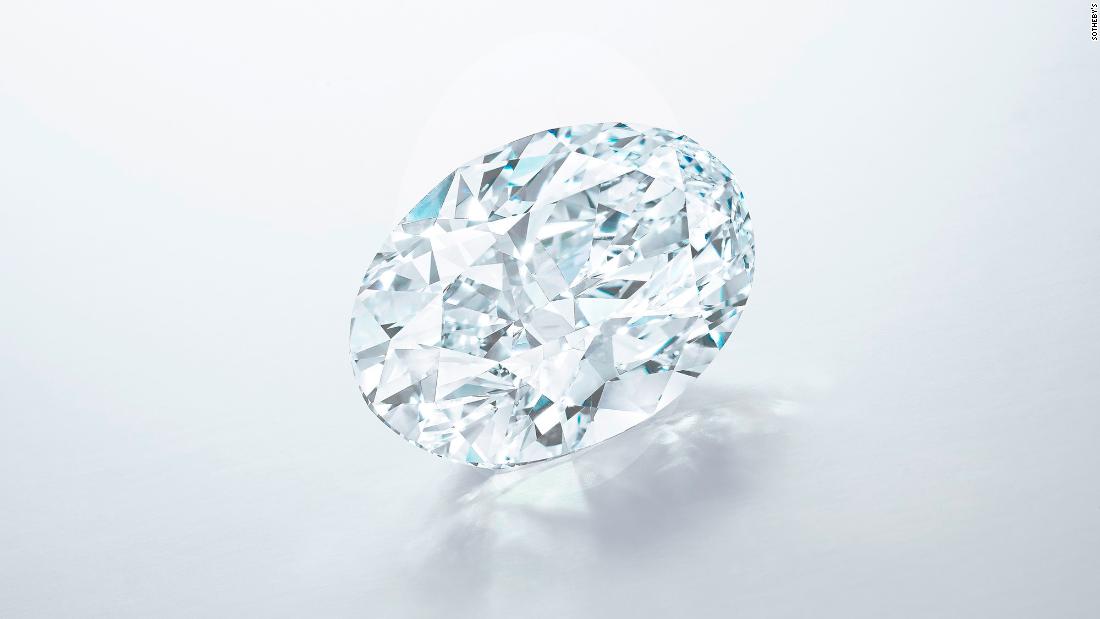 An exceptionally rare 102.39-carat diamond may become one of the most expensive stones ever to sell at auction when it goes under the hammer in Hong Kong next month.

Although auction house Sotheby’s declined to provide a pre-sale estimate, diamonds of similar size and quality have previously attracted bids between $12 million and over $30 million.

Cut from a 271-carat rough diamond discovered in Ontario, Canada in 2018, the oval stone has achieved top rankings in each of the “four Cs” — cut, color, clarity and carat weight — by which a diamond is judged, the auction house said.

It has been classified as “D color,” the highest grading for a white diamond, and is considered to be internally and externally “flawless,” placing it among the world’s most chemically pure, transparent and symmetrical diamonds. It also belongs to a rare subgroup of diamonds that contain little to no nitrogen.

The stone will be only the eighth white diamond of comparable size and quality to sell at auction, according to Sotheby’s. Credit: Sotheby’s

Only seven D color flawless (or internally flawless) diamonds weighing over 100 carats have ever appeared at auction before, according to Sotheby’s.

Of these, the most expensive was a rectangular 163.41-carat diamond, which sold for $33.7 million at Christie’s in Geneva, while the most paid for an oval variety stands at $30.8 million in 2013. If the diamond going under the hammer in Hong Kong next month attracts the same per-carat price as this latter sale, it would sell for over $26 million.

Unusually, the rare oval diamond is being offered without a reserve, meaning that it will be sold regardless of the size of the highest bid. Bidding will open online from September 15, with the sale concluding at a live auction in Hong Kong on October 5.

In the meantime, the item is set to go on display at appointment-only previews in Beijing, Shanghai, New York and Taipei.

In a press statement, Sotheby’s worldwide chairman of jewelry, Gary Schuler, said that it was “difficult to overstate (the stone’s) rarity and beauty.” Chair of Sotheby’s Asia, Patti Wong, meanwhile expressed confidence about the sale, despite the challenges presented by the Covid-19 pandemic, in what she called “deeply transformative months for the auction market.”

The stone was from a larger, 271-carat rough diamond discovered at the Victor Mine in Ontario, Canada. Credit: Sotheby’s

“Diamonds of this caliber attract interest well beyond the traditional pool of collectors,” Wong added. “This innovative sale seems to us the best way to introduce this exceptional diamond to the world in the current circumstances where travel is restricted and act as a great indicator of the vitality of the demand.”

While white diamonds can attract huge bids at auction, pink and blue varieties have achieved even larger sums in recent years. In 2017, a 59.60-carat pink diamond known as the Pink Star became the most expensive jewel ever to sell at auction when it went for $71.2 million at Sotheby’s in Hong Kong.
Two years earlier, the 12.03-carat “Blue Moon” diamond sold for $48.4 million, also through Sotheby’s.