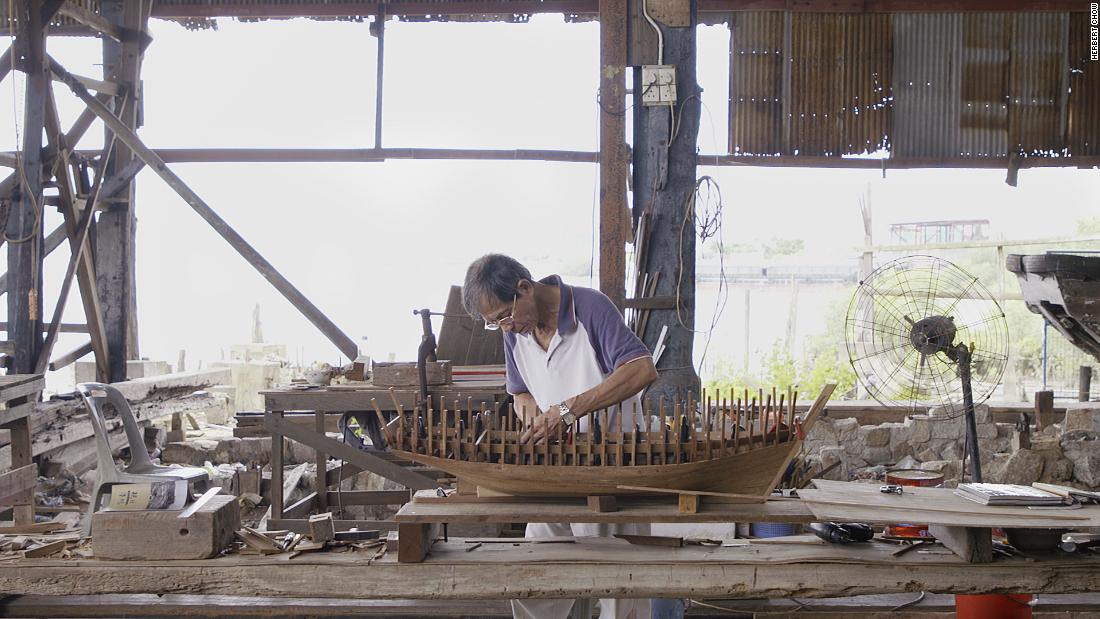 Master shipbuilder Tam Kam Chun is on a mission. Every day, the 71-year-old spends hours at an abandoned Macao shipyard, hunched over a table, hard at work. With only stray dogs for company and a single electric fan to keep him cool, he meticulously hand-crafts the sort of fishing boats that have been made here for generations.

But none of his creations will ever set sail. In fact, Tam’s boats are miniatures designed to preserve the city’s disappearing heritage.

“There is so much history in the fishing and shipbuilding industries,” he says. “I make model boats to show the craftsmanship and the building process (and) to educate people.”

For centuries, the shipping industry was at the heart of life in Macao, a former Portuguese colony that was transformed from a small fishing village to a major port. In recent years, however, casinos have taken over as the city’s main source of income.

And with mainland China able to produce state-of-the-art metal fishing vessels, quicker and at lower costs, demand for traditional wooden boats all but disappeared.

No new boats have been made here since 2006. Not full-sized ones, at least.

Three years ago, Tam — who is considered a “sifu,” or master, of his craft — was commissioned by a local temple to recreate a so-called “junk” boat in miniature form. He has since produced more than a dozen replicas of the very boats he spent his career making.

“We’re not just building models,” he said. “It’s about craftsmanship, shipbuilding and history.”

Macao’s 150-year-old shpibuilding industry is now a thing of history. No new boats have been made since 2006. Credit: Three Lions/Hulton Archive/Getty Images

Tam’s makeshift studio lies in an abandoned shipyard in Macao’s Lai Chi Vun village. The space, which is crumbling at its edges having endured several of the region’s worst tropical storms, is a shadow of its former self.

But for Tam, working in the very places he spent his youth is about more than finding a convenient studio — it allows him to reminisce about the industry’s boom era.

Shipbuilding in Macao hit its peak in the 1950s, when there were almost 30 shipyards across the region. By the 1980s however, the industry was in steep decline. Today, the wooden junks that once dotted the shores of Macao, and neighboring Hong Kong, have ceased to exist, save for a handful of tourist boats.

Macao’s shipbuilding industry hit its peak in the 1950s, but saw a steep decline by the 1980s. Credit: Horace Bristol/Hulton Archive/Getty Images

“We thought it would go on for (a) long (time), we didn’t see it coming,” he recalls. “I wonder how it went downhill so fast. How could I have known this would happen in my generation?”

According to Tam, this decline didn’t just affect shipbuilders, but all aspects of life in Lai Chi Vun.

Tam believes that the miniature boats he creates are more than just models.

“The shipbuilding process is the same,” he said. “The only difference is the tools used.”

Tam says he uses the same building techniques on his miniatures, as he used on his real ships. Credit: Herbert Chow

The complex techniques and precision required mean that Tam can spend up to 700 hours building a single boat, and will spend three months on each miniature on average.

“At our age, our eyes are not so good,” he adds, “so we are slower and can hardly see when it gets very dark… the small parts require more effort.”

There is no room for error, with almost every component supporting another.

“It’s just like a human body — every part is important. If you don’t have hands or feet, you can’t eat or walk. No one part is more important than the other — without each part, the boat cannot be completed.”

Tam says that every part of the ship is important. Credit: CNN

In 2018, Macao’s government recognized the Lai Chi Vun shipyard as a cultural heritage site. But the future of this craft — and the culture surrounding it — is dependent on the next generation, he says.

“Some people have started (providing miniature shipbuilding) classes in order to teach young people these skills, and to promote this culture,” he adds.

“You need people to help with the preservation — without the help of people, these skills will be lost.”