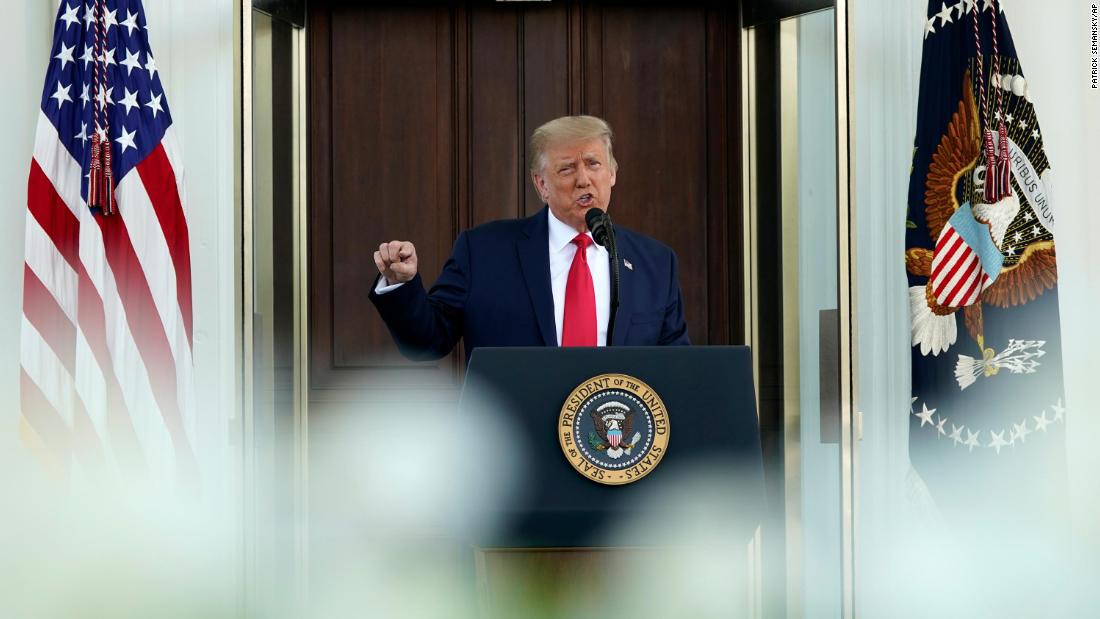 In 1996, President Bill Clinton was promising a “bridge to the 21st century” in Milwaukee. George W. Bush was calling John Kerry an Iraq War flip-flopper in Poplar Bluffs, Missouri, in 2004. Barack Obama talked up his auto bailout in Toledo, Ohio, in 2012 — but only after touring hurricane damage on the Gulf Coast.

Summoning reporters to the White House North Portico for a midday news conference, Trump again used the executive mansion as a political stage — an ethical line he started bending months ago but broke and threw away completely during last month’s Republican National Convention.
Emerging from the wooden double doors with a curt greeting — “Happy Labors — Labor Day” — the President wasted little time before attacking his rival Joe Biden, who was spending the day meeting with labor leaders in southeastern Pennsylvania.

“Biden’s a stupid person. You know that,” he said underneath the Federal-style portico, which was added to the building in 1829 to shelter guests arriving to the “president’s front door” on horseback.

But Biden was not his only target.

He laid into Biden’s running mate, Sen. Kamala Harris, for questioning the safety of a potential coronavirus vaccine that appeared rushed to market before Election Day — even as he continued to project an accelerated timeline that health experts have warned is unrealistic.

He defended himself against accusations he disrespects the military — even as he accused top Pentagon officials of working to enrich military contractors at the expense of troops.

And Trump insisted he was shutting down attempts to reassess American history to take into account the experiences of oppressed groups — even as he claimed to be against “cancel culture.”

Trump even grew annoyed when reporters attempted to question him while wearing masks — a practice he has inconsistently advised to prevent the spread of coronavirus while also mocking those who follow the health recommendations.

It was a somewhat discursive and decidedly nontraditional Labor Day for a president who has repeatedly assailed his rival for not leaving his Wilmington, Delaware, home to campaign. Biden, Harris and Vice President Mike Pence were all making campaign stops in person on Monday.

Trump will hit the campaign trail later this week in North Carolina and Michigan. But on Monday he seemed content to wage his rhetorical battles from home.

After Harris told CNN’s Dana Bash over the weekend that she would hesitate to get a vaccine that was made available before Election Day, Trump accused the California senator of “reckless anti-vaccine rhetoric” and demanded she apologize.

“It undermines science. What’s happening is all of a sudden you have this incredible vaccine and because of that fake rhetoric — it’s a political rhetoric,” he said.

In the CNN interview, Harris said she would not take Trump’s word that a vaccine approved under his watch was safe.

“I will say that I would not trust Donald Trump and it would have to be a credible source of information that talks about the efficacy and the reliability of whatever he’s talking about,” she said.

Still, even as the President denied he was himself using the vaccine race for political gain, he floated the prospect of a major development within the next month.

“It’s going to be — it’s going to be done in a very short period of time. Could even have it during the month of October,” he said. CNN reported last week that Trump is cranking up pressure on his administration to develop a vaccine quickly, mindful of the potential boon to his political prospects.

“Contrary to all of the lies, the vaccine — they’re political lies, they’ll say anything, and it’s so dangerous for our country ,what they say — but the vaccine will be very safe and very effective and it could be delivered very soon. You could have a very big surprise coming up,” he said Monday.

“I’m not saying the military’s in love with me — the soldiers are the top people in the Pentagon probably aren’t, because they want to do nothing but fight wars so that all of those wonderful companies that make the bombs and make the planes and make everything else stay happy. But we are getting out of the endless wars,” Trump said.

There has been little masking the recent tensions between Trump and his military leadership, including over the use of US troops in American cities and the renaming of military installations named for Confederate generals.

Still, Trump’s comment Monday was remarkable for its suggestion that four-star generals are simply trying to line the pockets of corporations; the accusation reflected a dramatic break by the commander in chief that will only worsen the existing strain.

Later, Trump was asked whether he’d asked his former chief of staff John Kelly, a retired Marine Corps general, to refute reports about his views of the military. Kelly’s onetime deputy Zach Fuentes released a statement a few minutes before Trump emerged denying he’d acted as a source for the original report, which ran in The Atlantic magazine, and saying he hadn’t heard Trump call American war dead “losers” or “suckers.

“No,” Trump said. “I have nothing against John.” That was a different message from Friday, when Trump told reporters Kelly had departed the White House “exhausted.”

When Trump was asked about his promise to withdraw federal funding from schools teaching the 1619 Project, a New York Times collection seeking to reframe American history around the date the first slave ships arrived on US shores, he decried what he called “cancel culture.”

“We grew up with a certain history and now they’re trying to change our history,” he said.

Renowned doctor gets scolded for getting COVID-19 vaccine alone