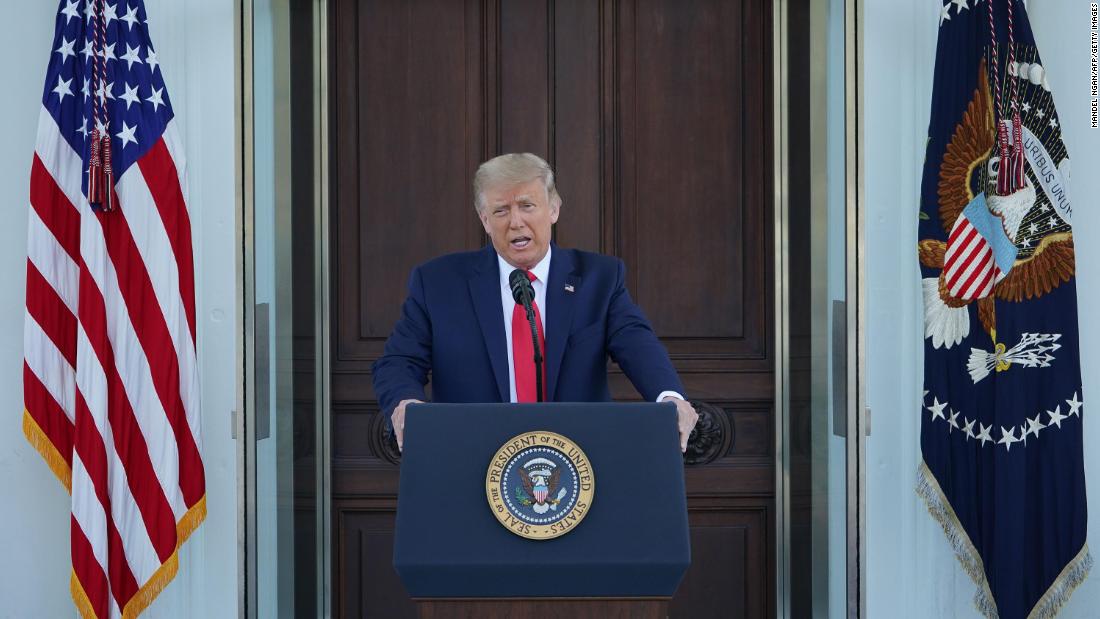 I went through his remarks and pulled out the lines you need to see. They’re below.

2. “As you probably see, the numbers are terrific. So we called some people, wished them a very happy Labor Day. And they told us how they’re doing.”

What numbers? What people? How are they doing?

3. “The unemployment rate plunged, really to the surprise of many, all the way down to 8 — 8.4% in August. And that’s the second-largest single-month decline on record. And we have the first; we have both of them. So we have the two number one declines. Decline meaning positive, not negative.”

It is true that the unemployment rate dropped to 8.4% in August. But the reason we have had such big drops in the unemployment rate is that it soared to over 14% during late spring due to the coronavirus shutdown. You can only have such big drops if you have big increases too. Also, “decline meaning positive.” Or put another way: “Not ‘bad’ meaning ‘bad’ but ‘bad’ meaning ‘good.'”

Trump is talking about the shape of the economic recovery. A “V”-shaped recovery is one where things collapse quickly and recover quickly. A “Super V” recovery is, um, not a thing. (Joe Biden has said this is a K-shaped recovery.)

What’s really changed since April is that we have identified lots more people who have the virus which, as this article in Psychiatric Times notes, has “increased the size of the denominator, while the numerator has remained relatively unchanged.” Meaning, the number of people dying is not all that different. We are simply better able to ID who has mild or asymptomatic cases far better.

6. “This could’ve taken two or three years, and instead it’s going to be — going to be done in a very short period of time; could even have it during the month of October.”

Trump is floating the idea of a vaccine being ready “during the month of October.” Put a pin in this. We’ll come back to it later.

7. “Joe Biden, the radical socialist Democrats would immediately collapse the economy. If they got in, they would collapse it. You’ll have a crash the likes of which you’ve never seen before.”

Overstatement, thy name is Donald Trump.

8. “Biden’s also pledged to demolish the US energy industry and implement the same policies causing blackouts in California. He wants to have things lit up with wind.”

“He wants to have things lit up with wind.” — The President of the United States

So you say we are setting records in “numbers,” eh? Tell me more…

He does? How have I not heard about this before????

“Why US farmers are falling out of love with Donald Trump.” — Financial Times

12. “We’re way ahead on the nuclear front. We’ve upgraded our nuclear.”

Everyone knows upgraded nuclear is the best kind of nuclear.

13. “When reports come out that certain countries don’t really like me too much, that’s not because of my personality, although it could be that also, frankly.”

“I call him ‘Where’s Hunter’?” — The President of the United States. Also, this claim about how much money Hunter Biden made in China is false.

The press has investigated this claim in regard to Joe Biden’s role in Ukraine. And nothing Trump is saying here is accurate.

17. “I’m not saying the military is in love with me. The soldiers are. The top people in the Pentagon probably aren’t because they want to do nothing but fight wars so that all of those wonderful companies that make the bombs and make the planes and make everything else stay happy.”

Holy crap. This is the President suggesting that the leaders of the US military don’t like him because he is trying to break up their war machine. Very normal stuff!

In which Donald Trump say he personally defeated ISIS. (Also, this is not true.)

19. “I talk about it cause today’s Labor Day. It’s a good time to talk about when we’re being ripped off by countries, but nobody’s even close to China.”

Proposed new Labor Day slogan: “A day to remember how we are being ripped off by other countries.” That could catch on!

OK, so, reporters should just write the words “Biden is a stupid person?” Like, that doesn’t feel like what journalists do?

21. “If Biden wins, China wins, because China will own this country.”

Again, how did I not know about this? Seems relevant!

In which Donald Trump tells a reporter (Jeff Mason of Reuters) to take off his mask while asking a question. Sure! Nothing to see here!

23. “John McCain liked wars. I will be a better warrior than anybody, but when we fight a war, we’re going to win them.”

Worth noting: John McCain was imprisoned for five years in a North Vietnamese prison camp after he was shot down. Donald Trump received five deferments to keep him out of the Vietnam War.

So, Trump wasn’t a McCain fan. But he respects people. In fact, he respects ‘”a lot” of people.

30. “But let me just — let me just tell you something: President Obama and Biden — Sleepy Joe — he knew everything that was happening. They were spying on my campaign, and they got caught. Now let’s see what happens.”

Estimates are that 80 million people may vote by mail this year amid Covid-19 concerns. But that’s not what Trump is saying here. He is saying that “they” are sending 80 million “non-requested” ballots to people. I have no idea where he got that number but one thing to make clear: What’s being sent is mail-in ballot applications, not mail-in ballots. If someone fills out the application, a mail-in ballot is only sent if their information matches what it on file with the elections department in their state.

Simply not true. The vote counting in Maloney’s district took far too long, yes. But no one alleged wrongdoing in the count.

Donald Trump’s 2016 campaign chairman, his personal fixer, his White House political adviser, his political Svengali, and his national security adviser — among others! — have been convicted of crimes. So …

34. “So we’re going to have this — a vaccine very soon, maybe even before a very special date. You know what date I’m talking about.”

Trump, who has blasted Democrats for making the vaccine political, just comes right out and says he wants to have the vaccine before election day. OK.

He literally just said that the vaccine would be available “before a very special date.” Like, am I on crazy pills here?

37. “I want to thank you all, and I just want to wish you a very happy Labor Day. And we’re having tremendous success, whether it’s on the vaccines, whether it’s on the pandemic — the — the plague that came in from China that China should’ve never let happen, cause I will never feel the same about China.”

Yeah, this feels like a good place to end.