The Sims 4 Journey to Batuu review 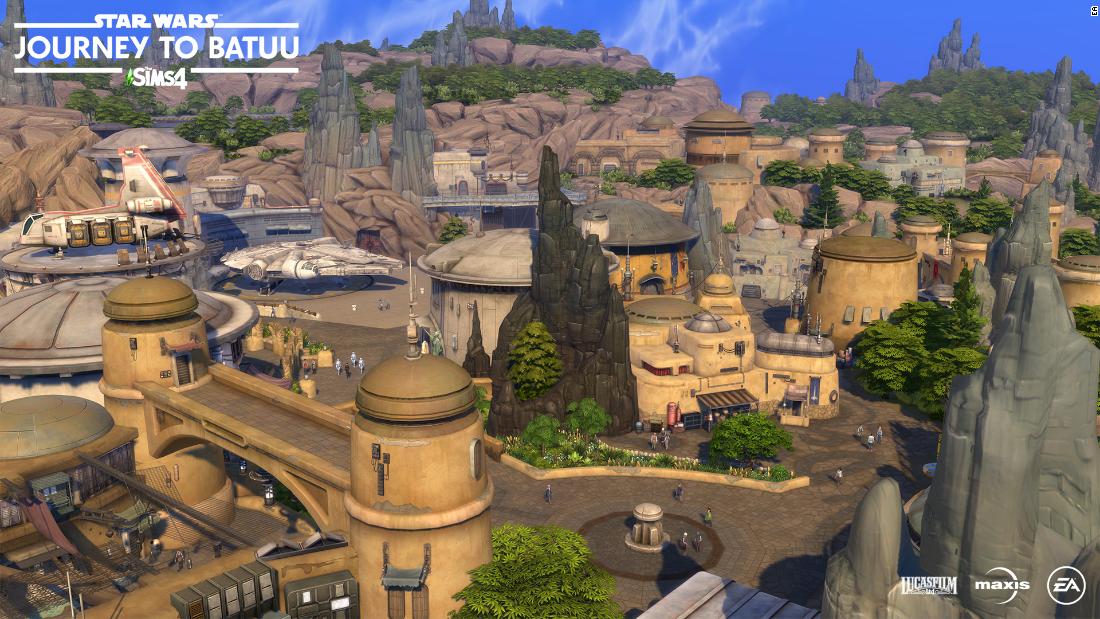 The Sims as a franchise is all about self-expression with Sims (the in-game characters you make) and the locations they’re in. Aside from the “Create-a-Sim” functionality, you can pick a location, pick a plot of land and get to the building. It’s easy enough to get the hang of, and you’re building what you want — or what you envision for the Sim.

We’ve seen touches of “Star Wars” enter the Sims franchise, most recently with a Baby Yoda (aka The Child from “The Mandalorian” on Disney+) mini statue for your house and some new clothing items. It’s been a blast, but the latest expansion pack for The Sims 4 pushes us into hyperdrive.

Journey to Batuu literally takes you to Batuu, which might be better known as the Galaxy’s Edge land at Walt Disney World in Florida or Disneyland in California. And in a similar boat to Microsoft Flight Simulator, the game lets you go to the location with a wild amount of detail.

We’ve spent nearly a week journeying around Batuu, and there’s a lot to love here. And it’s safe to say you get a ton of value for just shy of $20. Keep in mind you will need the full Sims 4 game on whichever platform you’re choosing. There are even bundles to get the base game and expansion pack for the consoles.

Once you choose to take a vacation, you’re presented with a map of Batuu and its three sections: Black Spire Outpost, First Order District and Resistance Encampment. You can hover each of the three spots and get a brief description. For the most part, Black Spire Outpost is like a middle ground. You’ll see resistance members walking the streets as well as stormtroopers.

First Order District is where you might spot Kylo Ren, along with high-ranking members and low-level Stormtroopers. And if you can keep a secret, the Resistance Encampment is home to the Resistance — and the secret base where you’ll spot heroes like Rey and Vi Moradi.

For the most part, Journey to Batuu is a choose-your-own adventure setup. You can chat with Resistance members or First Order confidants to get missions and learn about the respective sides. But you don’t have to join a faction per se. You can also explore and dabble with both sides. Or opt to work with both sides as a scoundrel — those who are there to make a quick buck. The king of the scoundrels? It’s of course Hondo Onaka, a friendly space pirate who runs a “legitimate shipping company.” Fair warning, Hondo might just steal credits (the equivalent to simoleons on Batuu) while you’re conversing. And while a lot of Star Wars is serious, The Sims of course adds in a level of humor to all of this. You can pull pranks on Stormtroopers, try to strike up a relationship with Rey or Kylo and if it works out, even give a baby a shot.

But the attention to all the details of Galaxy’s Edge is pretty outstanding. You can make out locations from the parks; Savii’s Workshop, Droid Depot, the Blue Milk stand, First Order Depot and Olga’s Cantina are all here. And for the most part, you can venture inside. Stands and stores, like other Sims locations, cannot be entered, but rather a window pops up to buy trinkets and goodies.

Completing missions and objectives will earn you some Battu currency (credits) We especially liked spending our hard-earned credits in Olga’s Cantina. Not only does it have the best music in the galaxy, spun by DJ R-3X, but it has iconic Star Wars drinks, and are the same ones you can get in Galaxy’s Edge. It certainly brought back memories from the parks, but where else can you drink alongside a Stormtrooper and vent to the person inside the suit? As a whole, the Cantina is a great way to mingle with members of all factions and get a feel for Batuu.

Our only qualm is one we have with any traveling in the Sims 4. You can’t walk from sector to sector but rather need to travel via the phone. You’ll need to go through the steps each time you want to move from the three areas, which breaks the flow of the game up a bit.

As we hinted at above, there’s a bit of a mission to go along with this pack.

You have different objectives that you can choose to take on and complete, allowing you to work your way up by doing so. You can choose to side with the First Order or the Resistance. Most of the missions involve scanning ships, like a land-speeder, the Millenium Falcon or a Tie Fighter. You’ll use your datapad — your phone — to scan and learn about the ships. For instance, you’ll learn the Tie Fighter has a lot of firepower, so it would be wise to not let it near the resistance outpost.

Let’s say you decide to team up with the Resistance. You’ll start by talking with a faction member and inquiring about the ethos, learn the secret phrase (Spoiler: Ignite the Spark — what else would it be?) and then can ask for missions. You’ll likely first be tasked with testing your allegiance. Talking with a few Stormtroopers, scanning some First Order hardware and eventually splicing in to get their communication codes. But it’s not a walk in the park. Stormtroopers might not be the smartest, but they will take notice if you’re trying to break a lock. You might get a talking to or, if you cause enough fuss, you’ll get taken into a questioning room.

And while you might want to confront Kylo Ren, we wouldn’t advise it. After all, he has the power of the force, and let’s just say will make you incredibly dazed and confused. Though it is fun to mess with him, we’ll admit.

The missions get more complex as you go along, though there is some repetitiveness here and there. Some storylines will even have you flying the ships, sadly though you can’t pop into the pilot seat. It will just fly you away, present you with a small story graf and then two options. You can decide which move your Sim should take or which fork in the road to go down.

The storylines are solid throughout and feel like they fit in with the Star Wars narrative. Electronic Arts, the publisher behind the Sims 4, did work with Lucas Film on the storyline. It’s a more comical take on the franchise as a whole, but when you boil it down, it has you fighting for a certain side. Or at least taking a stake in the side of your choosing.

Graphics and the environment as a whole is done really well. At night, you can see the stars glowing over the mountains. Stormtroopers look good, Rey looks pretty spot on and Kylo, well, looks like Kylo. He’s in the proper attire and dons the scary mask as well.

And as you complete the missions, you’ll get credits.You can use those to buy a Porg Plush or a Sabbac table. But there are two key things you’ll need to invest in. A droid of your own, which is equivalent to the experience of Droid Depot at Galaxy’s Edge. You can build your own R or BB-Unit, this way you can make a BB-8 or R2D2.

The other core item is a lightsaber. You’ll need to collect up the necessary parts and can eventually make one of your own. If your Sim is more athletically inclined, they’ll be better at wielding a lightsaber. You can choose to challenge other Sims on Batuu, take a lightsaber home (you’ll need to make two and gift it to someone to play with them) or even fight against Kylo Ren or Rey.

As a whole, we’ve really enjoyed The Sims 4 Star Wars: Journey To Batuu. At $20, with the base Sims 4 game required, it delivers a ton of content for the value. Three lands, a full storyline with three routers and plenty of fun is to be had in the Sims version of Batuu. We think it’s a no-brainer for a fan of Star Wars or for any fan of The Sims.

The Sims 4 Star Wars: Journey to Batuu is out now for Mac, PC, PlayStation and Xbox One.