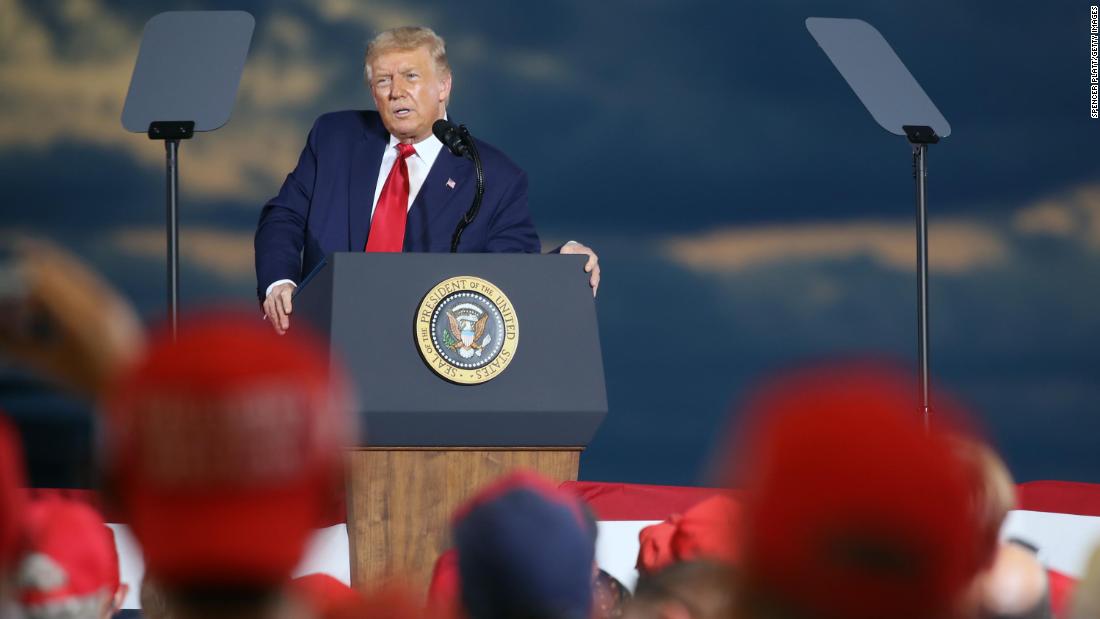 Whether the situation on the ground there helps him is an open question; the state still has a mask requirement in place, and many businesses — including bars and movie theaters — remain closed.

But the President did not wear a mask during his speech in Winston-Salem.

And while many supporters visible in stands directly behind Trump were wearing masks, most individuals higher up on the stands away from Trump and most supporters on the ground in front of Trump’s podium were not sporting masks.

Before Tuesday’s event, the Republican chairman of the local county commission said the President should wear a mask during his speech, a virtually unimaginable prospect for a President who has been mocking his rival for wearing one and who demanded reporters remove their face coverings when asking him questions on Monday.

As the campaign enters its heated final months, Trump is betting an imminent coronavirus vaccine and a rebounding economy will provide an eleventh-hour boost to his flagging reelection effort.

He has begun accelerating his public timeline on a potential Covid vaccine, saying Monday one might be available “very soon, maybe even before a very special date” — a reference to Election Day.

And a new Trump campaign ad out Tuesday crystallized the impression the President is hoping to call an end to the coronavirus pandemic before voters decide his fate.

“In the race for a vaccine, the finish line is approaching,” a narrator says in the opening lines of the commercial, concluding: “President Trump’s great American comeback is now underway.”

In North Carolina, however, the promise of a vaccine by sometime in October might come too late. Voters in the state are already able to cast absentee ballots, which began being distributed last week.

The current situation in the state remains far from normal. The state’s Democratic governor, Roy Cooper, announced last week that North Carolina was moving to “Phase 2.5” in its reopening efforts, which allowed gyms and playground to open with limitations but still required indoor establishments such as bars and cinemas to remain shuttered.

Many students in the state began the school year with online learning instead of returning to classrooms, though some districts decided to forge ahead with in-person learning.

There was little to no physical distancing at Trump’s North Carolina rally, which, like most of his pandemic-era events, took place outside on an airport tarmac.

The President’s campaign has said masks, hand sanitizer and temperature checks would be provided for attendees, and like all of the President’s rallies during coronavirus, those who signed up for tickets had to acknowledge the risks of becoming infected before registering.

Plyler — a top Republican official in the county he Trump is visiting — said the situation on the ground there should warrant a change in Trump’s mask-wearing behavior.

“We’ve got 6,000 people with the virus right now in this county. And the latest statistic is, out of the 6,000, I think is that 86 have passed away from it,” he told CNN. “My concern is — we’ve got the virus here. The virus doesn’t give a rip whether it’s the President or God Almighty himself. It’s going to find its place. And the way we have to figure this, at least in my mind, is that we all have to be careful about it.”

Plyler, who is a Trump supporter who said he would eagerly attend the President’s rally if he hadn’t already scheduled surgery for Tuesday, said Trump could set an example.

“You know what would be neat? If before he got off the plane if he gave everybody a box of Make America Great Again masks,” he said.

Trump has visited North Carolina three times in the past three weeks, an indication of the state’s importance to his electoral strategy. He won the state narrowly in 2016 and polls currently show a tight race against Democratic nominee Joe Biden.

The state began mailing absentee ballots last week, the first in the nation where voters can begin making their selections.

Ahead of his rally, Trump touted his environmental record in Florida during an official event. Though taxpayer funded, the President’s official events often take on a political tone and Florida is another battleground state Trump is hoping to retain.

This story has been updated with additional developments Tuesday.