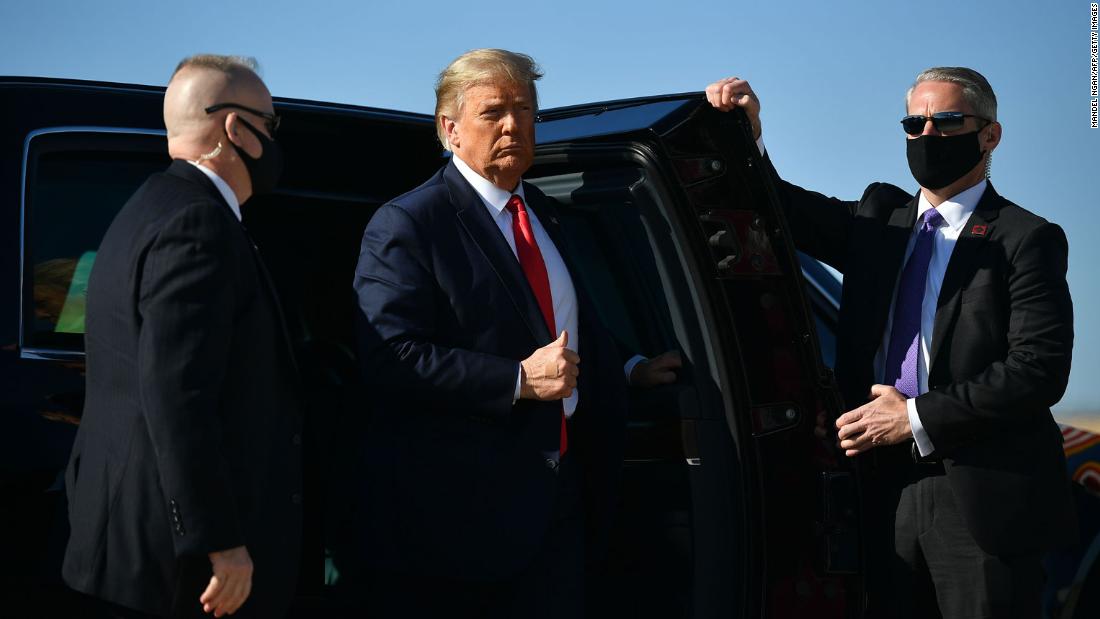 All that’s missing is the airplane.

A superstitious politician and a lover of routine, President Donald Trump is actively working to replicate the atmosphere that culminated in his 2016 victory, convinced if the same pieces are in place as he barnstorms battlegrounds at breakneck pace — just like he did last time — the lighting-in-a-bottle results will follow.

He has even taken to thinking wistfully of his jet, a Boeing 757 painted red and gold, that he used to criss-cross the country during the frenzied final stretch of 2016.

“I have the exact same plane at home. It’s true. The exact same,” Trump said Friday on a baking-hot tarmac in Florida, gesturing at the blue-and-white government airplane of the same model, but with considerably less gilt, positioned nearby.

“It’s a different company that made the engines,” he said, quickly identifying a shortcoming compared to his own jet. “I think those are Pratt & Whitney, and I have Rolls-Royce.”

Nostalgia has always weighed heavily on Trump’s political persona — it’s the second “A” in his “MAGA” motto — but it also effects his decisions and strategy, often against the advice of his political team, according to people who have spoken to him recently about his reelection efforts.

As he makes a final push for a second term, Trump wants to replicate the heady last days of his only previous political campaign, even though he is now the incumbent and the political calculus has shifted dramatically. But this time, Trump seems more aggrieved at what has happened to him than what has happened to the base of people who support him.

Jetting across the country this weekend, the collection of advisers joining him in the cramped forward cabin aboard Air Force One included veteran 2016 advisers Jared Kushner, Stephen Miller, Dan Scavino and Hope Hicks, who Trump convinced to return to his orbit eight months ago. Absent were some of the more recent additions to his circle, notably his chief of staff Mark Meadows.

As he did many times in 2016, Trump is basing himself for two days at his Las Vegas hotel as he raises cash across the border in Orange County and hosts campaign rallies in Arizona. He is even attending the same evangelical church a few miles from the Strip that he visited in October 2016, when pastors and ministers gathered to lay their hands on him and pray.

Like four years ago, Trump hopes that by outworking his rival — three-a-day rallies, often stretching past 90 minutes, in every state he is contesting — he can eke out a victory that defies polling and punditry.

Once seemingly out of reach because of the viral pandemic ravaging the country, Trump has insisted his signature campaign rallies proceed, convinced they are what propelled him to office the first time around. They have grown larger as the calendar ticks toward November 3, though are unlikely to ever match the tens of thousands who once came to hear him speak.
And he is charging headfirst into making baseless accusations against Democratic presidential nominee Joe Biden of being a “criminal” who, in Trump’s telling, sits atop a shady syndicate of political for personal gain. It’s the exact accusation he used to lob at Hillary Clinton (and still does, even though he defeated her), even as he is again being aided by a Russian disinformation campaign targeting Biden.

The President has often lamented that his political efforts since entering the White House have felt staid compared to his efforts four years ago, people who have spoken to him said, weighed down by the massive apparatus that accompanies any president and saddled with an incumbent’s responsibilities.

Trump has fondly recalled those final 2016 campaign days as the last when he was unburdened by the job he eventually won, and wants to feel the same excitement of his first go-around. He enjoys reminiscing about what it was like in the days before the election — and recounts Election Night 2016 at nearly every rally he attends.

“That beautiful night, four years ago, was at the greatest of all time, probably the greatest night in the history of television,” Trump said on a blustery tarmac in Janesville, Wisconsin, on Saturday night as a crowd roared in approval. “We had so much fun. The tears that were flowing — remember the tears?”

Former officials also say Trump has a superstitious streak and believes if the circumstances of his campaign are similarly aligned — from the people to the rallies to the rhetoric — he might eke out a victory again.

Yet a little like a college freshman trying to bring together friends over Thanksgiving break, only to learn everyone has changed, Trump is finding that nostalgic reminiscence can’t always be manifested into reality.

The burdens of being the incumbent, saddled with problems like the coronavirus pandemic and a stalled economy, have changed how Americans view him. And what was once a novel political approach — to air openly the grievances that politicians have long sought to stoke only tacitly — now seems to many observers like a tired act.

Four years ago — and particularly as he worked to re-win voters after the Access Hollywood scandal — Trump hammered on issues like immigration and trade that he said were unfairly advantaging the elite to the determent of blue-collar Americans. His focus and message narrowed as the campaign wound to a close.

Now, he has railed at “deep state” misdeeds he claims weigh on his presidency and warrant an extension of his term. He complains at length about what interviewers have asked him and the tone in which they asked it. And he repeatedly insists he’s given up millions of dollars in income by serving as president.

In Oval Office sessions over the past week, Trump has remained insistent that what brought him victory in 2016 will work again, a person briefed on the sessions said. His refusal to adjust to a starkly different political reality has caused frustrations among Republicans, who fear his deep unpopularity could doom not only his presidency but GOP control of the Senate.

Aides have worked to little avail to intervene and hone a message more fitting for a sitting president than an outside rabble-rouser, including in recent days as polls continue to show him losing ground among voters he won four year ago.

At times, Trump has taken the directive literally, appealing directly to “suburban women” in his campaign speeches. At other moments he has stated his campaign’s electoral calculus as if arriving fresh from a political briefing.

“You know what? We win Wisconsin, we win the whole ballgame,” he said Saturday night as the temperature dropped in Janesville. “What the hell do you think I’m doing here on a freezing night with 45-degree wind? You think I’m doing this for my health?”