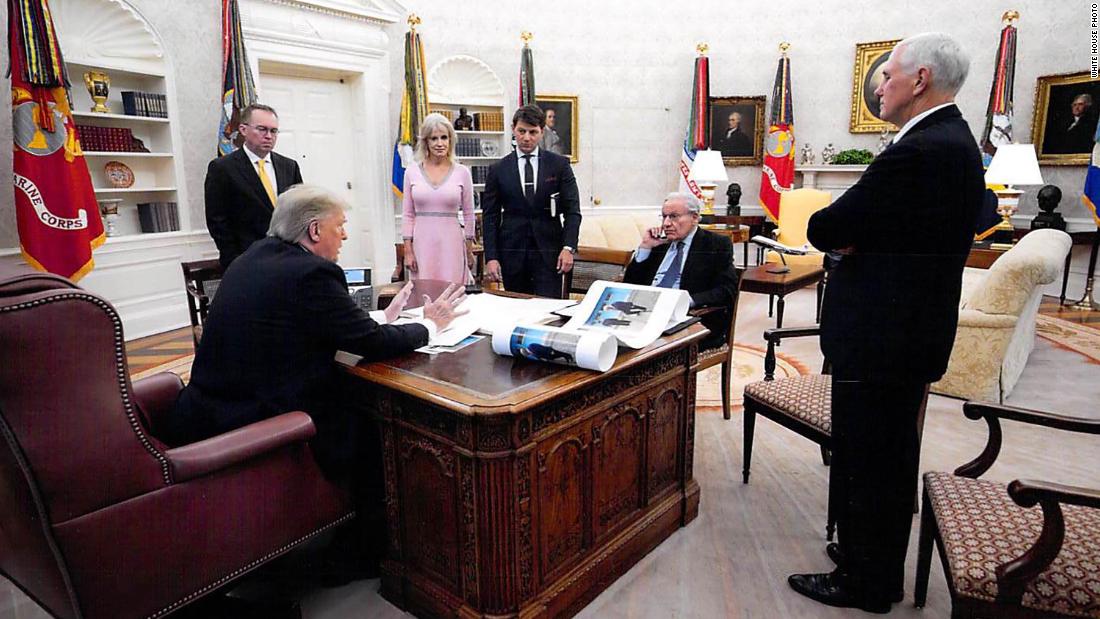 Trump even asked the White House photographer to take a picture of him and Woodward in the Oval Office. Woodward writes Trump explained he liked a longer necktie to tuck the back into the label. “Don’t you hate it when it flies?” Trump said, according to Woodward.

The interviews took place from December 2019 until late July 2020, in the Oval Office, at Mar-a-Lago, and by phone, occasionally after 9 or 10 o’clock at night. Sometimes, Trump called Woodward unexpectedly. Even for a President known for being unscripted in his comments to the public, Trump’s 18 conversations with Woodward offer an intimate snapshot of his unfiltered thought process and impulsive behavior.

Woodward recorded his interviews with Trump with the President’s permission. CNN obtained an early copy of “Rage” as well as some of the audio recordings.

Trump agreed to be interviewed by Woodward after complaining he didn’t participate in Woodward’s 2018 bestselling book “Fear.” Woodward had repeatedly offered Trump the opportunity to be interviewed for that book, but Trump pretended he had never received the requests.

‘You’re probably going to screw me’

Throughout the interviews, Trump is clearly worried about how he will be portrayed in the book. Sometimes, he lobbies Woodward: “It would be an honor to get a good book from you,” Trump says.

More often, he is suspicious: “You’re probably going to screw me,” Trump says. “You know, because that’s the way it goes.”

“And in the end you’ll probably write a lousy book. What can I say?” Trump laments during another interview.

During their first interview on December 5, 2019, Woodward writes that Trump is focused on showing him a series of photographs.

“I’ll get you something that’s sort of cool,” Trump said, picking up the phone on the Resolute Desk, asking for pictures of himself with North Korean leader Kim Jong Un at the Demilitarized Zone.

“This is me and him,” Trump said. “That’s the line, right? Then I walked over the line. Pretty cool. You know? Pretty cool. Right?” On June 30, 2019, Trump became the first US president to set foot in North Korea.

Trump continued, “nobody’s ever done that. I mean, they’re cool pictures when you — you know, when you talk about iconic pictures, how about that?”

Woodward writes that Trump seemed more impressed by the importance of the photo than the event itself.

During that same interview, Woodward notes Trump had filled his desk with what Woodward describes as “props.” “The parchment appointment orders of the judges stacked in the middle of the desk, the large rolls of pictures of him and Kim, and a binder with letters from Kim,” Woodward writes. “I knew it was a big show.”

Woodward explains: “I had interviewed Presidents Carter, Clinton, George W. Bush and Obama in the Oval Office. All sat in the standard presidential seat by the fireplace and did not have props.”

A week later, on December 13, 2019, when Woodward returned to interview the President again, Trump was still fixated on the photos and insisted on giving Woodward a poster-sized print of Trump and Kim.

“Do you have a round thing for this so he can take it? Or even a rubber band or something. Because you can’t fold it, you’ll ruin it. I don’t even know why I’m giving it to you. That’s my only one,” Trump said.

Woodward writes that Trump veered from topic to topic, and in one phone call, exaggerated his social media status.

“I’m number one on Twitter,” Trump told Woodward. “When you’re number one and when you have hundreds of millions of people, whether they’re against you or not they still read what you say.”

Trump also claimed he has the top spot on Facebook, saying CEO Mark Zuckerberg had told him so at the White House. (Zuckerberg) “said, congratulations, you’re number one on Facebook.”

In fact, Trump is not in the top 50 most-followed Facebook pages. He has nearly 31 million followers, but is eclipsed by soccer star Cristiano Ronaldo, Shakira and Justin Bieber among others. Obama is also ahead of Trump, with 55 million followers.

During the interviews with Woodward, there were frequent interruptions, including one time when first lady Melania Trump came into the room.

On another occasion, White House social media director Dan Scavino walked in while Woodward and Trump were talking at Mar-a-Lago. Scavino wanted to show Trump a clip edited to music of Democratic members of Congress watching Trump’s 2019 State of the Union address. According to Woodward, the video showed Sens. Bernie Sanders, Kamala Harris, Elizabeth Warren, and Rep. Alexandria Ocasio-Cortez with “bored” or “expressionless” looks on their faces.

On March 19, as the coronavirus pandemic was exploding, Woodward asked Trump if he ever sat down alone with Dr. Anthony Fauci, director of the National Institute of Allergy and Infectious Diseases, to learn more about the virus.

“Yes, I guess, but honestly there’s not a lot of time for that, Bob,” Trump said to Woodward. “This is a busy White House. We’ve got a lot of things happening. And then this came up.”

Woodward expresses surprise at Trump’s response, considering “Trump had carved out hours” to do interviews with him, despite the unfolding crisis.

By July 2020, many of the interviews focused on the pandemic. And during what would be their second to last interview for the book, Woodward told Trump he was concerned about the state of the country.

“As a citizen, somebody who lives here,” Woodward said, “I’m worried as I can be about this whole thing.”

See the lost species of chameleon rediscovered by scientists

Diamonds ‘from the sky’: This entrepreneur is making environmentally friendly gemstones

See the lost species of chameleon rediscovered by scientists