How to do hard things: 6 tips for completing difficult tasks 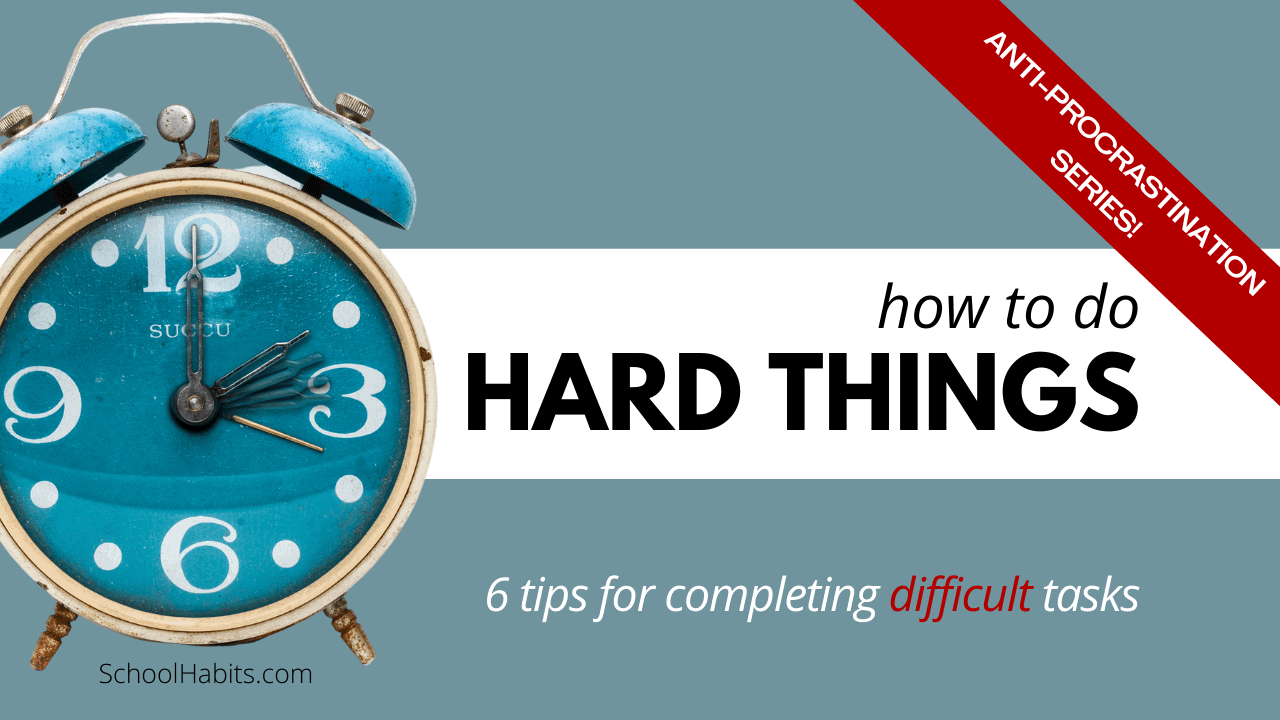 This post about how to do hard things is one of many resources in my anti-procrastination series. I’ve included links to the other resources throughout this post and at the end.

Every post in this anti-procrastination series begins with a list of 6 common reasons most people avoid completing tasks. Tim Pychyl identified that we procrastinate on a task when it is one of the following:

This article offers procrastination tips for overcoming the last trigger on the list: when a task is difficult.

It’s human nature to avoid things that cause us pain. That’s why we instinctively pull our hand away if we touch a hot pan. When we encounter a difficult task, a part of our brain misreads that difficulty as pain. In other words, we often avoid doing hard things because we falsely perceive them as painful.

Some students – they do exist – thrive in challenging work, and actually enjoy the process of figuring out difficult things. But that’s not everyone, and if you’re reading this post, I assume that’s not you. But it’s a critical school and life skill to know how to do hard things — and no, giving up is not an option.

How to do hard things: 6 practical tips

Instead of thinking I can’t do this because it’s hard, try figuring out precisely what part of the task is hard. Highly doubtful the entire thing is hard. What is hard – getting started? Understanding the directions? Finding the materials? WHAT exactly is hard?

Identifying the exact part of the task that is difficult enables you to recognize and do the parts that are not hard, and then get help on the part you’re stuck on.

This tip pairs nicely with tip #1. Even the most difficult tasks are composed of small steps, but when we are stressed out and accustomed to avoiding hard things, we see challenging projects as giant blobs.

Honestly, the most important thing to do when something is hard is to break it down into the smallest steps possible. Do this activity on paper. Write the name of the big task on the top, and then go ham with writing down each baby step involved. You should be able to break down every large, difficult task into a series of smaller tasks that each take no longer than 15ish minutes. If one of your “small steps” takes longer than that, break it down further.

This tip seems so obvious, but I’m shocked at how often I remind students and clients to use their resources when something is hard. If you’re procrastinating on something because you “don’t know how to do hard things,” please remember that there is an exact answer out there for your exact question. So go find it.

Which resources you consult will depend on the task, but below are some examples. Keep in mind that resources can include people, technology, or the things around you.

HARD TASK: Coming up with a thesis for a history paper

4. Start with what you do know.

No matter how difficult you perceive a task to be, there is some part of it that you know how to do. Trust me. You are smarter than you think you are.

What to do when something is hard and you don’t know where to begin:

Just because something is hard does not mean it’s impossible or that you can’t do it. If something is hard, all that means is that it’s hard. What’s so bad about hard things? (Actual question to you.)

I’ve written about frustration tolerance before (also called discomfort sensitivity) – basically it’s this idea that we can all tolerate different levels of frustration before we give up or get anxious. Difficult tasks can frustrate us, yes, but it’s important to recognize when something is legitimately beyond our skill set (in which case we need to seek assistance), or when it’s just “frustrating” us.

6. Get clear on the end result.

Sometimes tasks seem hard because we are unclear about what “success” looks like. For example, you might think it’s hard to write your history paper because you don’t know exactly what your teacher is looking for. Or you might think it’s hard to create a family budget because you’ve never seen a good model of what a successful family budget looks like. Before you give up on a task for being too hard, get clear on what the end result should look like. Consider the possible resources outlined in Tip #3 to find a model to work towards.

Knowing how to do hard things is a critical school habit and life skill. There will always be hard things we have to handle – whether for school, work or home. The first step in doing difficult tasks is recognizing that their perceived difficulty is the reason for our procrastination. If you’ve done that, then work through these 6 tips, one at a time, until the thing is done.

If you’ve been procrastinating on a task for a reason other than because it’s hard, then start with the other resources in this Anti-Procrastination Series.

Other resources in this Anti-Procrastination Series

The Legal and Political Issues