Skateboarding in the US 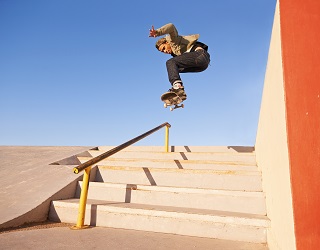 Skateboarding took off in the United States in the 1970s, and was popularized by surfers in California. Since then, skateboarding has evolved in many ways; the culture, equipment, aesthetics, styles, and realm of possibility constantly grow and change. In the early days, skateboarding was very underground, and didn’t take off and start to penetrate pop culture until the 2000s. When a skater meets another skater, they automatically have a shared culture and history which can often instantly create an irrefutable bond. If a skater is new to a city and doesn’t know anyone, he or she can go to a local park or spot, and make a new friend almost instantly. As a skater, I’ve personally had repeated sessions with the same person without even learning their name; skating is a language of its own. Instead of calling each other by name, skaters often identify each other by style and trick selection, and communicate by skating the same obstacle together and inspiring each other to learn new tricks.

Something that has emerged fairly recently in the skate community is the presence of online communities of skaters that are fascinated with certain companies, types of skating, styles, and scenes associated with various eras in skate history. I personally have met with people from all around the US and other areas of the world simply because we skate similarly and have similar interests within the world of skating. I now interact with these people often, and get excited and inspired when I see that they’ve learned a new trick, even if it’s a trick I’ve seen done a thousand times by others. Within these communities, the skaters all interact with each other, inspire and are inspired by each other, and can offer support when necessary. These communities are often global, and are great ways to get to know like-minded people from all around the world. Skaters look out for each other, and are always excited to show other skaters from out of town all the spots around their city, introduce them to all their friends they skate with, and give them some of the merchandise from their favorite local companies.

Just about every skateboarder has dreamed of visiting the iconic spots that he or she has seen in all the famous videos and photos that define the culture. Many of these spots have been a key part of skateboarding’s culture for decades, while many are newly discovered, but catch a skater’s eye as the perfect place to do a trick. Skaters often travel great lengths for just a few certain spots. Since skateboarding originated in the United States, and so did much of the culture, just about every state is associated with some iconic spots that skaters will travel from all over just to get a few tricks on, and many states, such as New York and California, are associated with hundreds. Here are three of the most famous places for skateboarding in the US that you should check out if you have the chance:

The post Skateboarding in the US appeared first on The International Student Blog.