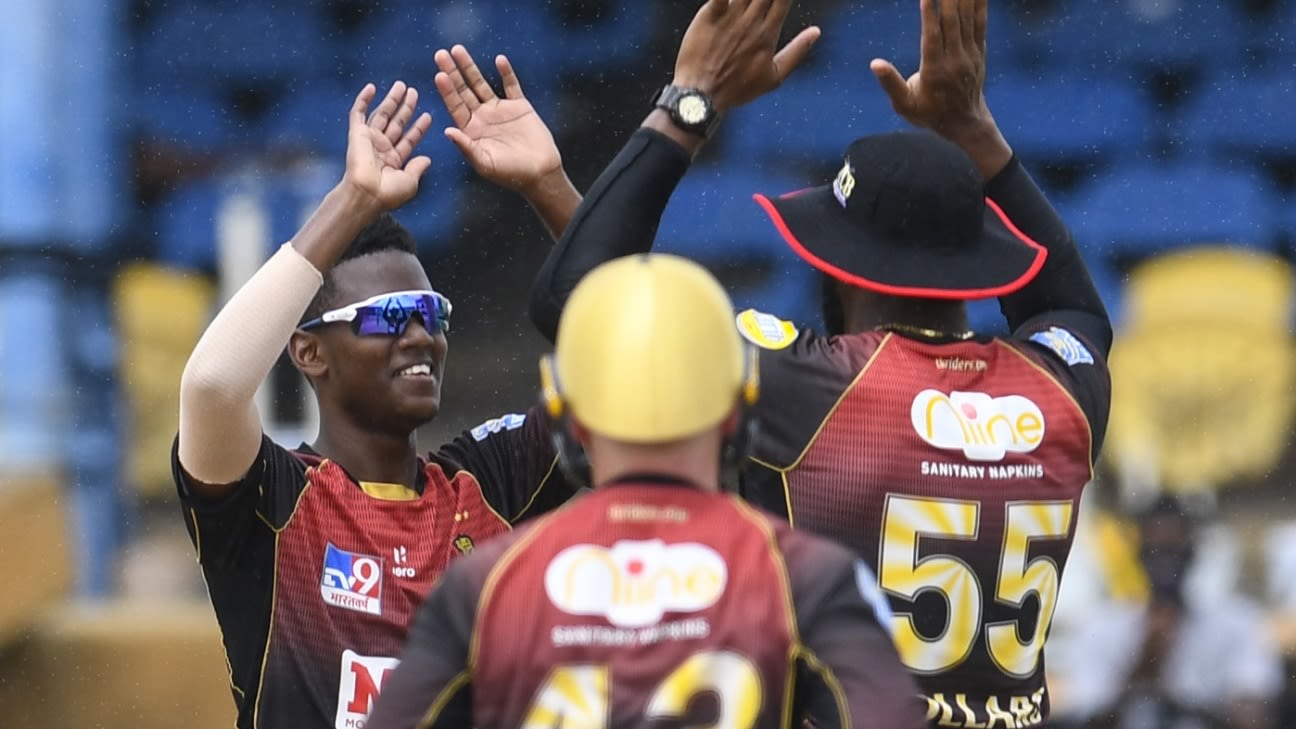 Daren Sammy: “I see TKR as Goliath. They are the Goliath of the tournament, but like I said to my men: ‘don’t you forget that David defeated Goliath’.”

Kieron Pollard: “How long ago was that?”

The captains of the last two teams standing in CPL 2020 set up the scene perfectly for the final on Friday. Pollard’s Trinbago Knight Riders have been so dominant that they have won all their 11 matches in the lead-up to their fourth final appearance. On the other hand, Sammy’s St Lucia Zouks have overcome tremendous odds to enter their first-ever CPL final.

Sammy believes that the Zouks can still topple the Knight Riders if they continue to rally and execute their plans under pressure.

The last time two these two sides came up against each other in the second leg of the tournament at the Brian Lara Cricket Academy, the Zouks had made the Knight Riders dig deep. They got rid of the Knight Riders’ openers fairly early, then pinned down Tim Seifert and Darren Bravo in the middle orders, but Pollard launched three fours and as many sixes at the death to lift his side to 175 for 5. Former Knight Rider Mark Deyal and Andre Fletcher made forty-somethings each for the Zouks, but the experience of Pollard and Dwayne Bravo trumped them. Both bowlers shifted their lines wider and restricted the batsmen from targeting the smaller boundaries.

Pollard conceded that the Zouks “pushed” them last week, but emphasised that past records would count for nothing in the final. Instead, he counted on the Knight Riders’ vast experience in finals to help them clear the final hurdle. Pollard and Bravo have featured in 43 T20 finals between them, and nobody has more T20 titles than the two – both are tied on 13.

“Four other teams would’ve liked to be in a position that both teams are in,” Pollard said. “So, you just have to go out and play good, consistent cricket and at the end of the day the result takes care of itself. One good thing is we have guys who would have played in a lot of finals before, so [that helps] to settle the nerves of guys who are new to these things.

“Again, last year we were pretty disappointed to lose in the semi-final. We made some changes and came with a different sort of mentality this year and it has shown on the cricket field, so it’s just a matter of jumping the last hurdle and hopefully be four-time champions.”

Among the changes that the Knight Riders made for this season was letting go of Denesh Ramdin and giving local players like left-arm fingerspinner Akeal Hosein, who was the player of the match in the first semi-final, and top-order batsman Tion Webster greater exposure. While some of those changes have been forced, with Colin Munro (finger fracture), Sunil Narine (kidney stones) and Ali Khan (hamstring tear) not being fit during various stages of the tournament, it has provided a peek into the next-gen Caribbean players.

“We found ourselves in a position where we could get these guys into the team and into the tournament and give them exposure,” Pollard said of giving the new faces a go. “Because when you look at it and when you look at what has transpired in the CPL in the last seven or eight years, you tend to continue to recycle old guys because you don’t have that other [domestic T20] tournament where you can unearth other talent in the Caribbean – not only Trinidad & Tobago, also Jamaica, Barbados.

“If I’d be a little critical, yes, the pitches haven’t been up to standard in terms of batting, but what I’ve seen is that the guys haven’t mentally changed their game to suit the conditions.”

“We had the Caribbean T20, but now that’s no more. Akeal Hosein would have come in, Tion would have come in not expecting to play much games, but when you look at they have played four-five games and they have been stars in what they’ve done. So, we have talent on the bench, it’s just a matter of exposure. Mark Deyal was with us last year, he played a couple of games only, but he went to St Lucia and he played over half the games. So, we have talent, but there’s one thing that’s stopping us and that’s something we need to look at if we are about bringing up youth and future generation of West Indies cricketers.”

With the Caribbean T20 having been scrapped, Sammy echoed Pollard’s comments, saying it wasn’t “ideal” to pick players for CPL from four-day and one-day tournaments.

‘You can’t complain about pitches’

One of the major talking points this season has been the nature of the pitches, with the entire tournament being played in Trinidad in the wake of the Covid-19 pandemic. Some teams have struggled to chase down sub-100 totals, with five-time finalists the Guyana Amazon Warriors getting rolled over for 55 by the Zouks in the second semi-final. Both Pollard and Sammy refused to blame the pitches, with the Knight Riders captain pointing out that West Indies batsmen haven’t been able to adjust to different pitches in international cricket as well.

“If I’d be a little critical, yes, the pitches haven’t been up to standard in terms of batting, but what I’ve seen is that the guys haven’t mentally changed their game to suit the conditions,” Pollard said. “And that’s something that has not only happened to us in CPL, but it has happened to us in international cricket as well.

“You can’t complain all the time about pitches when we [are] not changing as individuals. I didn’t see the mental fortitude of batsmen in other teams throughout the tournament. In all honesty, we, TKR, have tried to adjust to the situation that has presented itself because in the same games we score 180-plus, but teams score 70 and 80 and there’s a big disparity there. If you go to Australia where pitches are bouncy, what will you say? You don’t get bouncy tracks in the Caribbean? We can’t continue to make excuses; we go to Sri Lanka, where pitches are spinning and stuff like that.”