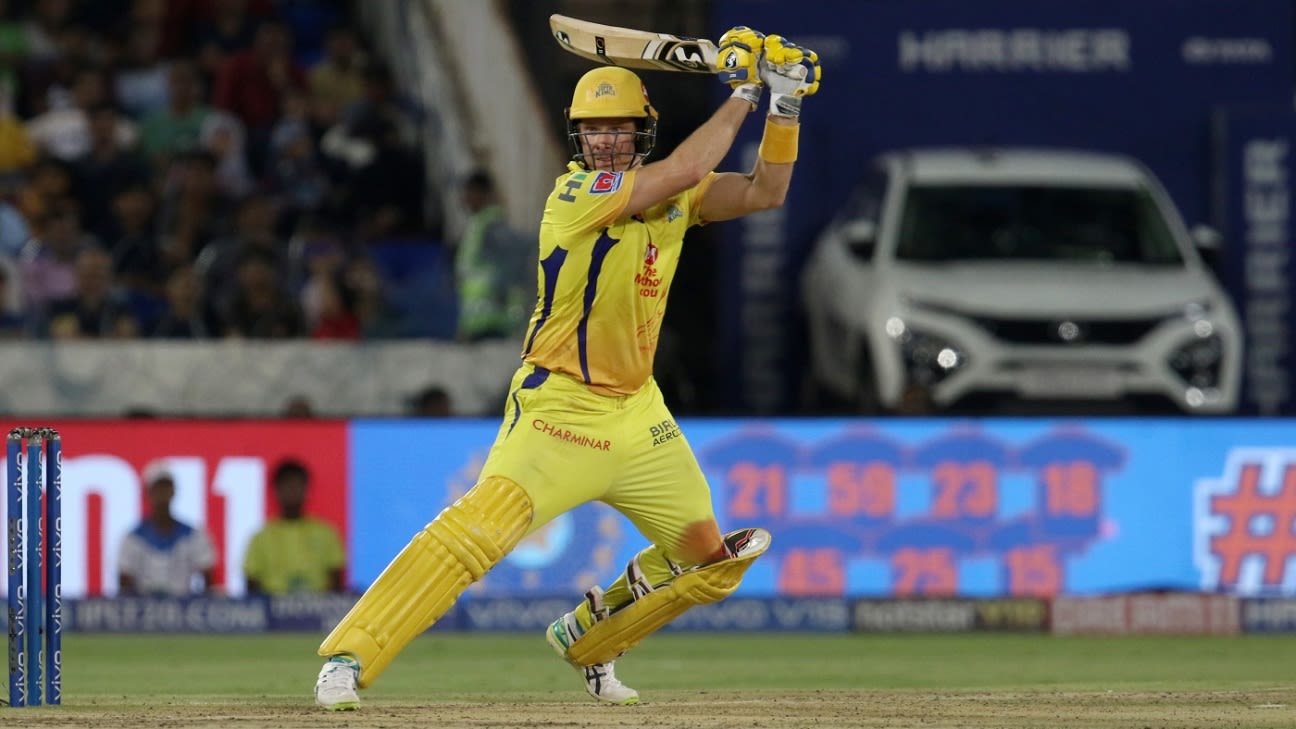 Shane Watson has praised the Chennai Super Kings’ “world-class leaders” for showing faith in him through a difficult IPL season in 2019, saying the franchise stuck by him and showed confidence when his batting form was a far cry from the highs of the 2018 season.

Watson was one of five Super Kings players to feature in each of their 17 matches last season, eventually ending up with 398 runs at an average of 23.41 and a strike rate of 127.56. After his first ten innings, Watson had made only two 30-plus scores, until he made a 53-ball 96 against the Sunrisers Hyderabad for his first half-century of the tournament. It was still an up-and-down season, though, as in the next four innings, he couldn’t get past 10 before ending the season with two more fifties, including an 80 in the final against the Mumbai Indians where he nearly won the Super Kings the title.

“The 2018 season was one of my better seasons, it wasn’t just the final [where Watson made a match-winning century],” Watson said on Nabeel Hashmi’s YouTube show, in reference to his 555 runs in 15 innings in 2018. Hashmi is the head of player acquisitions at the Quetta Gladiators, Watson’s team in the Pakistan Super League.

“But last year, certainly CSK stuck with me through thick and thin. In every other team that I’ve been in, I may have been dropped a couple of games before I got the runs against the Sunrisers Hyderabad. Just them backing me, knowing my next few good innings were around the corner, [was amazing]. Only world-class leaders will really stick by and have the confidence to do that, given the calibre of the players we’ve got.

“That was a great learning for me as well, to be honest, to show that if you believe in someone, you believe in their ability, because you’ve seen what they’ve been able to do time and time again and that they will come good at some stage. It worked out well as I was able to contribute, not in the final (laughs), I got run out in the last over (laughs), but up until then, I got as close.”

Watson has been among the most prolific T20 cricketers in the world, and arguably one of the all-time IPL greats. Having started off as the Rajasthan Royals’ talisman, he then had a stint with the Royal Challengers Bangalore, before being picked up by the Super Kings as 36-year-old in 2018.

“CSK had full faith in me, they’re an incredible franchise to play against,” Watson said. “When I played for Royals against Chennai, I always admired Stephen Fleming, and MS [Dhoni] as well, the way he carried himself on and off the field. To be able to play at CSK and experience the way the franchise is run incredibly well from top-down was a very special experience. I do feel fortunate to have this part of my career of the IPL in the last few years, to play for a franchise that looks after everyone so unbelievably well.”

The Super Kings have had to deal with various issues in the lead up to this IPL. Thirteen members of their contingent, including two cricketers, were tested positive for Covid-19, which resulted in an extended quarantine period. But as one of the world’s foremost T20 freelancers, Watson feels his experience in switching on after not playing regularly, and the overall experience other squad members, will come handy in dealing with a sudden restart.

“I’ve sort of been away playing T20 tournaments on and off for the last four years or so,” he said. “I have more of an understanding [now] but still it’s a challenge to be able to get your skills up. Having an experienced team means your players have more understanding of being able to get their skills to execute under pressure from game one. That is why we believe we’ve got a great chance of having a great year because of the quality of players and the experience we’ve got. We’ve got more chance of not making many mistakes trying to get up to speed as quickly as we possibly can.”