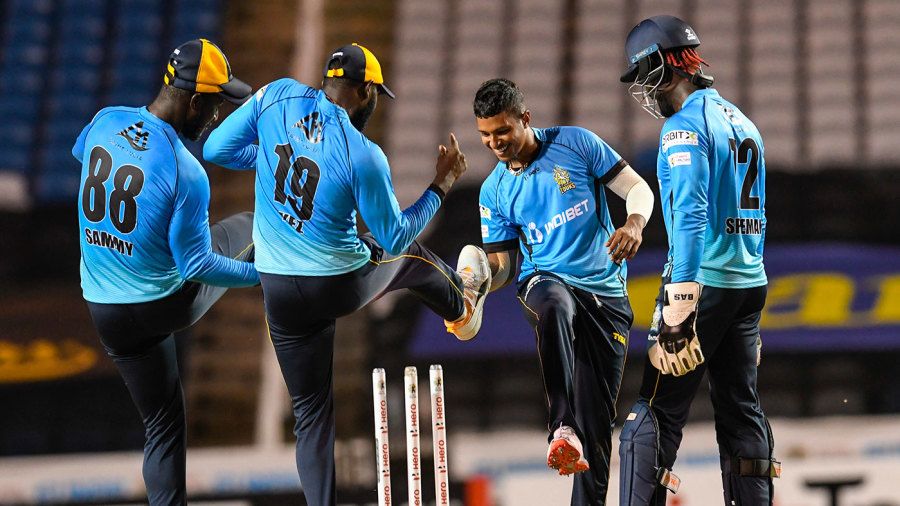 The Guyana Amazon Warriors may have picked up momentum with three straight wins to storm into the semifinals, but they came unstuck in staggering fashion against the St Lucia Zouks in the contest that really counted. Put in to bat by Daren Sammy, they melted into irrelevance, bowled out for 55 in under 14 overs for what was the second lowest total in CPL history.

In response, the St Lucia Zouks needed just over 4.3 overs to seal the shortest chase in T20 franchise history, and surely the most dominant win knockout T20 cricket has ever seen, with Rahkeem Cornwall and Mark Deyal putting the Warriors’ bowlers to the sword. It takes them to their first ever CPL final, where they face the unblemished Trinbago Knight Riders, after what shaped up to be a potentially mouth-watering contest turned into something of an uncomfortable embarrassment. It perhaps serves as the exclamation mark to a competition that has lacked the competitive edge and drama that made it arguably the most fun T20 league around.

Start as you mean to go on

The Zouks were in control literally from start to finish, with Scott Kuggeleijn finding himself on a hat-trick after the fourth ball, having coaxed an edge from Brandon King, one ball before Shimron Hetmyer mysteriously shouldered arms to one heading straight for middle stump. The Warriors went into their shell thereafter, and as the wickets continued to tumble, the runs dried up further still. Kuggeleijn aside, it was a masterclass in strangling a side by spin, with Mohammad Nabi, Roston Chase, Zahir Khan, Javelle Glen and Mark Deyal sharing the wickets around. It was perhaps a sign of how listless the Warriors were with the bat that opener Chandrapaul Hemraj, who hung around until the 13th over and hit one of just two sixes all innings, is worthy of a mention.

Having watched the bounce, swing and seam movement that Kuggeleijn achieved in that first over, Nabi might have wondered if this wasn’t the spinners’ paradise the CPL has generally thrown up this year. The New Zealander was a tough act to follow, but Nabi showed there would be no let-up from the other end, varying his pace and flight expertly as he kicked off with a maiden and intensifed the pressure on two new batsman. In a unit that teems with spinners, he was rewarded with three straight overs, and repaid his captain’s faith by allowing just six runs. He might have only taken Nicholas Pooran’s wicket, but could claim plenty of cricket for the ones that tumbled at the other end.

When it seemed like the Warriors’ day couldn’t get worse at the halfway mark, Cornwall and Deyal displayed otherwise, making a mockery of the Warriors’ struggles with the bat. There were complaints about the nature of the pitch when Chris Green’s men had bat in hand, but with the Zouks having taken 4.3 overs to gun down 56 without loss, you wonder if the demons were all in Warriors’ heads. Cornwall took apart the famously economical Green – setting a surprisingly passive field for such a low chase – in his first over, smashing two sixes over deep midwicket to set the tone for what would be a very brief innings. eyal, named Man of the Match for his all-round contribution, joined him in that approach, later saying he did not wish to get trapped in one of those horrible, low-scoring T20 games that chasing sides fall victim to. In 27 balls, the Zouks hit five fours and four sixes; the Warriors had only managed two of each all innings.