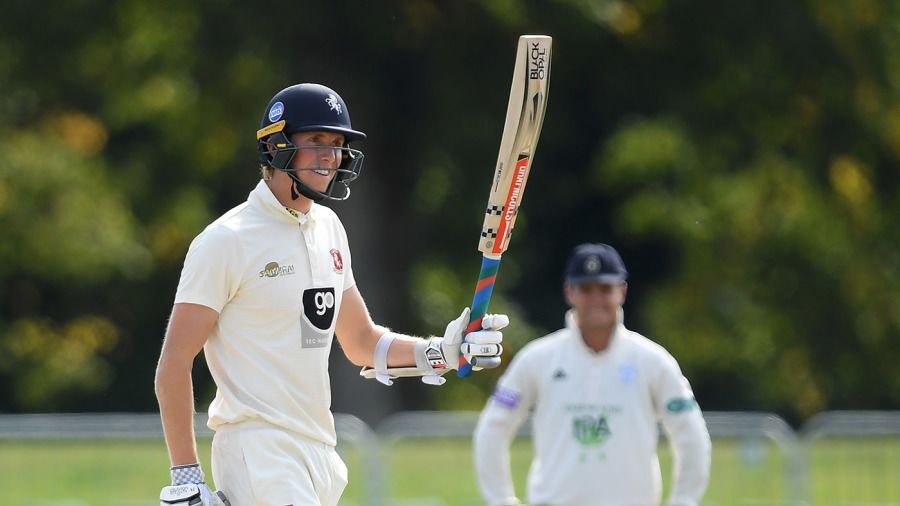 Crawley, who stroked 18 boundaries during his 146-minute stay, joined forces with Marcus O’Riordan (52 not out) – his former Tonbridge School team-mate – to mark their maiden first-class partnership with a match-winning second-wicket stand worth 157 as Kent cantered home with a day and 21 overs to spare.

Crawley, who suffered an eight-ball duck in the first innings here, reached three figures for only the fifth time in domestic first-class cricket with a rasping pulled four against seamer Ajeet Dale.

With the hosts needing only 16 for victory, Crawley blotted his copybook by missing an ambitious sweep against leg-spinner Mason Crane to depart leg before for 105.

Jack Leaning was bowled by Dale for a duck during the final throes, but O’Riordan, diligent to the end, saw the job through with an unbeaten 52, reaching his maiden first-class fifty from 121 balls and with six fours.

Kent had made a miserable start to their successful pursuit when acting captain Daniel Bell-Drummond became a first-over casualty, bowled for seven after allowing the ball from Ian Holland to spin back onto his stumps and dislodge the off bail.

But O’Riordan, playing as Kent’s makeshift opening bat due to Jordan Cox’s issues with stomach cramps, combined with Crawley to add 50 inside 66 minutes.

On his competition debut, Crawley should have gone for 35 but saw his lofted, bottom-handed on-drive against Tom Scriven dropped by Dale at wide mid-on and, much to Scriven’s annoyance, parried to the ropes for four.

The tall right-hander celebrated the let-off by cracking three more quick-fire boundaries off Scriven to reach a 44-ball 50 with 10 fours.

The pair took their run-a-minute stand into three figures inside 24 overs, by which time the classy Crawley was virtually playing see-ball, hit ball.

Despite dropping six cordon catches in the opening two days of the game, Kent polished off their win soon after tea to secure their third Willis Trophy victory in five starts. Their only defeat coming in the opening round away to Essex, who had secured their south group title with a nine-wicket triumph over Middlesex at Chelmsford earlier in the day.

Hampshire had started day three on their overnight total of 108 for five – for an overall lead in the match of 129 runs – yet failed to bat out the morning session despite a three-hour career-best vigil worth 68 by Scriven.

They added only two before Lewis McManus steered Harry Podmore’s lifting leg-cutter to third slip without adding to his 95-ball half-century.

Scriven, the 21-year-old all-rounder making his second Willis Trophy appearance, reached his maiden first-class 50 from 96 balls and with nine fours with a rasping square drive against Grant Stewart who, somewhat unusually, opened the bowling ahead of Kent’s leading wicket-taker Darren Stevens.

Podmore bagged his first five-wicket return of the campaign in his next over by enticing debutant Scott Currie to follow an away-swinger and edge low to slip.

Stevens replaced Stewart at The Nackington Road End after 40 minutes’ play and, as if to make a point to acting skipper Bell-Drummond, struck with his fifth ball by removing Crane after a sliced drive to gully.

With Matt Milnes unable to bowl and off the field with a stiff back, Stewart was switched to the Pavilion End to replace Podmore but, despite beating the bat on numerous occasions struggled to find an edge.

Kent’s relentless pressure paid dividends, however, when Scriven dragged an attempted straight drive against Stevens straight into the hands of Podmore at mid-on.

Stewart finally got his deserved wicket and denied Stevens another five-wicket return when last man Dale edged an attempted push drive through to the keeper.

Podmore closed with season’s best figures of 5 for 43 and Stevens returned 4 for 35 and match figures of 9 for 72.

Stay Organized With Google Calendar, So You Don’t Fall Behind!

5 Focusing Tips For Students At Home During COVID