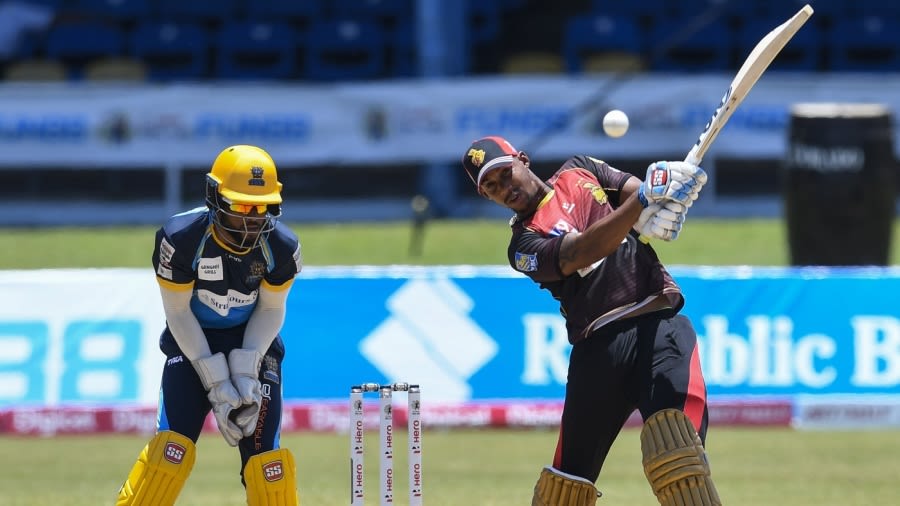 On the back of a dominant performance with both bat and ball in the first CPL 2020 semi-final, Trinbago Knight Riders sealed a spot in the final for the fourth time after demolishing Jamaica Tallawahs by nine wickets in a one-sided contest.

At the top, the Knight Riders’ two left-arm spinners – Akeal Hosein and Khary Pierre – shared five wickets to strangle Tallawahs’ in the first innings, restricting them to 107, while in the second innings Lendl Simmons (54* off 44) and Tion Webster (44 off 43*) shared an unbeaten 97-run stand to chase the target down with five overs to spare.

Knight Riders now await the winner of the second semi-final between Guyana Amazon Warriors and St Lucia Zouks in the final.

As soon as Hosein, with his drifters from around the wicket, finished the game’s first over with a wicket maiden, the Tallawahs had an uphill task. Jermaine Blackwood was the first to go, bowled trying to slog Hosein, and the next over Pierre dismissed the season’s top scorer, Glenn Phillips, with a ball that held up long enough that the batsman’s cut popped into the hands of point.

The score of 2 for 2 soon became 10 for 3 when pinch hitter Mujeeb ur Rahman – batting at No. 3 for the first time in his T20 career – was caught reverse sweeping at slip, and that became 25 for 4 when Asif Ali was caught off Hosein, his third wicket of the match. No. 4 Nkrumah Bonner (41) fought to resurrect the Tallawahs innings with No. 6 Rovman Powell in a 38-run partnership for the fifth wicket, but he was bowled by a Fawad Ahmed googly in the 12th over.

That brought in Andre Russell, but his time in the crease lasted only five balls after he was incorrectly deemed caught at first slip when a Sunil Narine ball flew off the flap of his pad and the score was 68 for 6 in the 14th over. For the remainder of the innings, Tallawahs battled long enough to go past triple digits thanks to Powell who was out for 33 off Pierre in the 18th over, and the 20-ball resistance from Carlos Brathwaite, in which he got 13 runs, helping Tallawahs reach 107 for 7 courtesy a six off the last ball of the first innings.

The chase began with Fidel Edwards’ first over leaking ten runs, but there was a small opening for Tallawahs to make a game out of the semi-final when Mujeeb rattled Narine’s stumps in the second over, but that hope was short lived.

In pursuit of more wickets, Sandeep Lamichhane was expensive trying to attack, and after seeing off Veersammy Permaul, both Simmons and No. 3 Webster got runs easily. Neither batsmen offered a chance to the bowlers and once the target was in touching distance, they smashed Russell for 25 in two overs and Brathwaite for 14 off one over – including two boundaries – to seal the win with 30 balls to spare and give themselves a chance to win a fourth CPL title.

Australia vs India, 2020-21 – Joe Burns rediscovers the fundamentals of opening ahead of David Warner’s absence

Hong Kong is fast running out of avenues for dissent

Will Sourav Ganguly’s fate as BCCI president be decided on December 9 by Supreme Court?