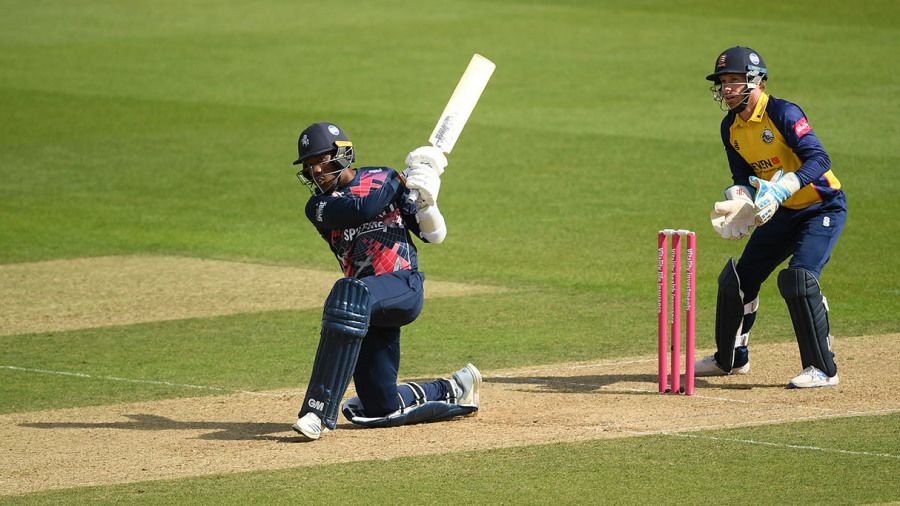 Daniel Bell-Drummond continued his awesome Vitality Blast campaign with an impeccable 81 as Kent Spitfires thrashed Essex Eagles at the Kia Oval to hold onto top spot in the South Group.

Spitfires skipper Bell-Drummond is now the second-highest scorer in the competition, with 228 runs and a fiery strike-rate of 181. His hitting, along with Alex Blake’s unbeaten half-century, saw Kent to an imperious 193 for 6.

That was enough as Imran Qayyum’s splendid 3 for 25 saw the Spitfires triumph by 29 runs and continued their unbeaten first half of the tournament.

Bell-Drummond led the innings exceptionally, first with Zak Crawley and then Blake, having won the toss and elected to set a total on a warn wicket, with huge boundaries. He has enjoyed an exceptional start to the Blast, putting on at least 49 for the opening wicket with Crawley in all four previous fixtures.

They continued the trend with 83 between them as they attacked the powerplay – scoring 81 off the first six overs, with Bell-Drummond striking eight boundaries off Shane Snater and Matt Quinn.

Bell-Drummond found the mid-wicket region most profitable, with 48 of his runs coming in that quarter of the ground, although he cut nicely as his alternative boundary option.

He lost Crawley and Heino Kuhn in quick succession, the former caught off Simon Harmer to a stunning diving catch from Snater and the latter castled, before Blake helped jump the score.

It only took three balls for Blake to pump Aron Nijjar for six over long-on, to start a profitable middle-overs spell for the designated away side.

Blake’s big blows were mimicked by Bell-Drummond, who pulled powerfully to the boundary to reach his 22nd format fifty in 26 balls, before thrashing over mid-wicket for a maximum of his own.

The 64-run stand ended when Bell-Drummond was lbw swinging across the line to Harmer – who was the only Essex bowler to return figures worth boasting about with 2 for 21.

Blake continued in Bell-Drummond’s absence, eventually scoring four sixes and two fours, on his way to a 31-ball half-century.

But Kent’s quest to reach 200 fell short as Jack Leaning, Grant Stewart and Jordan Cox all fell cheaply late, and Blake ended on an unbeaten 52.

Essex motored out of the blocks through the free-swinging Cameron Delport in their chase but regular wickets thwarted their hopes of victory.

The South African reached a quick-fire 28, which included huge sixes over mid-wicket and straight, but fell when he attempted to reverse lap a slower ball from Tim Groenewald.

Bell-Drummond kept himself in the game with a catch at point to dismiss Tom Westley, before Dan Lawrence holed out to long-off – both off Qayyum.

Varun Chopra had held the innings together with 41 off 33 but, having been dropped on 39, he was stumped off the left-arm spinner.

Paul Walter was run out, Ryan ten Doeschate – after an enterprising 42 – was caught at cow corner and Harmer was bowled.

Snater and Adam Wheater flailed 20 runs together but fell 29 runs short as they ended on 163 for 7.

Looking for marketers to promote our app to college students! : Student

A Day Trip to Söderköping

For Amazon, Apple, Facebook and Google business is booming