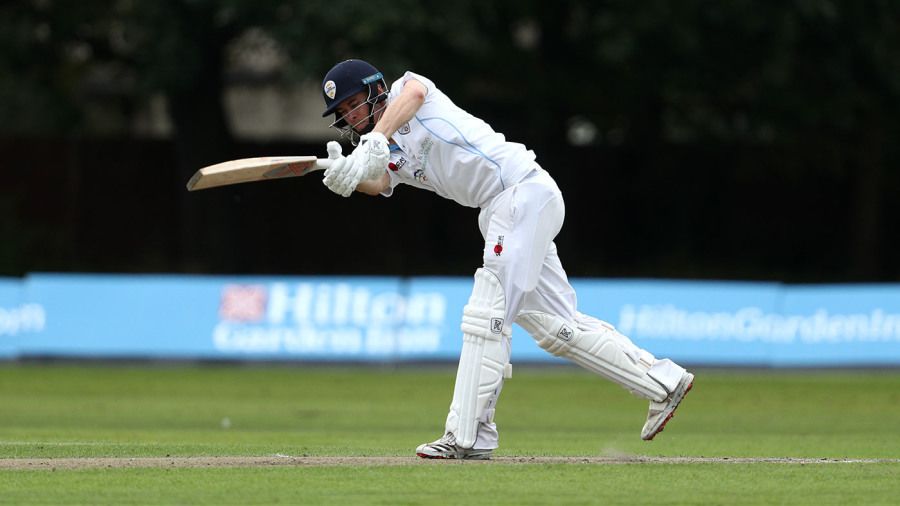 Barring a second epic run-chase in six weeks and a change of mind by the ECB, Derbyshire will not win the Bob Willis Trophy, but the next know-nowt pundit who patronisingly groups them among the “smaller” counties should be put in the stocks at Buxton and pelted with pies.

Rather more usefully, perhaps, he or she could be made to watch the four-day cricket played by Billy Godleman’s side this season. That would include a memorable run-chase at Trent Bridge, a fine victory at Grace Road and two enterprising displays in rain-affected draws at Headingley and The Riverside.

It would also feature the marvellously determined attempt to earn a batting bonus point on this third day at Aigburth, a venture that only ended when Dustin Melton’s swipe at a straight ball from Danny Lamb failed to connect and the Derbyshire’s last man had his middle stump knocked back with his team five runs short of its goal.

That dismissal mattered, so we thought, because it effectively ended the visitors’ hopes of reaching the final at Lord’s. But late on Tuesday evening the ECB announced that its technical committee would adjudicate as to which teams would play in that game once the final round of matches had been completed.

The governing body had left itself this option to take account of a Covid-19 outbreak and it was just such an event that caused the abandonment of Sunday’s game between Gloucestershire and Northamptonshire at Bristol. Logic and natural justice would suggest that Essex will still be in the final against Somerset or Worcestershire – Tom Westley’s players celebrated their success at Chelmsford when Melton was castled – but if Derbyshire chase down well over 300 tomorrow there remains a possibility that the criteria for qualification will change from most wins to run-rate.

This idea was being mooted just after tea at Liverpool. These are strange times and nothing is being ruled out, certainly not Godleman’s batsmen chasing down a tall target against an inexperienced Lancashire attack.

But the cricket that was played at Aigburth mattered too and it would be a pity if the resilience of Derbyshire’s middle and lower order batsmen went unnoticed amid all the announcements and possible rethinks. Not the least admirable factor about Derbyshire’s cricket this season is that their players have been virtually peripatetic – the County Ground has been used by Pakistan and by women’s teams – but their fightbacks are now more expected than surprising.

This one began on Monday evening when the visitors had slumped to 61 for 7 in reply to Lancashire’s 219 and Harvey Hosein was joined by Mattie McKiernan. That pair continued their resistance on a heavy-clouded bowlers’ morning at Liverpool with Hosein in particular looking to get down the pitch to Lamb and George Balderson in an attempt to negate movement and maximise the opportunities to drive the ball.

The hundred partnership came up and Derbyshire were only 37 runs short of that crucial point when McKiernan played across a straight ball from George Burrows and was leg before wicket for 31, his runs being scored in seven minutes over three hours of concentrated effort.

Fifteen runs later Hosein went too and his dismissal was a line of poetry. Six young players have made their first-class Lancashire debuts in the Bob Willis, two more than Sussex, the next most enterprising county. Against Derbyshire, Lancashire picked Jack Morley, a 19-year-old left-arm spinner from Rochdale, and his classical delivery brought Hosein forward but not quite to the pitch of the turning ball. George Lavelle, a 20-year-old who plays for Ormskirk in the Liverpool Competition, took the catch.

And so we had this:
Hosein c Lavelle b Morley 84
Both the innings and the dismissal will warm the winter.

Derbyshire now needed 22 runs and one way of getting them was to whack the ball as hard and far as possible. When Lamb pitched the ball up Melton borrowed a shot from Ashford-in-the-Water’s Sunday XI and thrashed it over midwicket. About five minutes before lunch he tried it again…

But let us return to our one-eyed critic who believes that the number of first-class counties should be reduced. We will give him the initials CG. He might ignore the cricket played by Derbyshire for most of this season and point only to the afternoon session when Godleman’s dispirited bowlers conceded 126 runs to Keaton Jennings and Alex Davies. Lancashire’s fifty came up in the 13th over, their hundred in the 20th. Davies pulled and cut with the ferocity of a bantamweight cheated out of his prize money. After tea he lifted one of McKiernan’s leg spinners into the car park to the right of the bowling green and looked set for a century when he drove Matt Critchley, Derbyshire’s second leggie, straight to Anuj Dal at short extra cover.

That dismissal began a fine evening for Derbyshire who claimed five further wickets before the close. (Perhaps they were reinvigorated by the news from St John’s Wood.) Critchley took four of them, including that of Jennings for 81 when the Lancashire opener toe-ended a reverse sweep to Godleman at cover. However, the leg-spinner’s 26 overs cost 126 runs, figures which give some idea of the enterprise shown by Lancashire’s batsmen.

An even clearer idea of that approach was given by Balderson, who reached his maiden first-class fifty in the final over of the evening session and hit the last ball of the day for a straight six. One hopes that ends Lancashire’s batting in this game. A target of 336 would be very fair and Vilas will learn a lot about his young attack if he declares overnight and trusts them with the task of winning the game.